Outrage is a useful tool in a democracy, but not when it’s directed at the wrong target or ignores the facts. As the criticism of Burger King’s so-called ‘tax inversion’ deal with Canadian fast-casual restaurant and coffee chain Tim Hortons heats up in the political arena, several facts are being blatantly ignored. While it may be ideologically satisfying to label the merger as being unpatriotic because it will deprive the U.S. Treasury of tax dollars, it is also an overblown criticism.

Consider how shareholders of public corporations get taxed. Unlike investors in private companies who get taxed once on their pass-through income, public investors get a double hit.

To take a simple example, for every dollar that a public company makes in income, it has to pay 35% in federal income taxes as well as more in state and local taxes – let’s call it another 5%. The remaining 60 cents are then distributed as dividends to shareholders. Of that 60 cents, the shareholders now have to pay personal taxes in the average range of 20% to 39.6% depending on how long they have held the stock. Again, taking state and local taxes into account, in aggregate then, most shareholders pay somewhere between 55% and 67% in taxes on their investment in a public company.

This analysis, of course, ignores tax loopholes that large public companies are able to take advantage of but such loopholes rarely yield more than a 5-10% benefit, which still leaves shareholders paying an average of 50% in taxes.

Even those who believe in progressive taxation would be hard pressed to agree with this tax scheme. True, shareholders may also achieve gains through the appreciation of their stock, which is not taxed twice, but that is meant to be a bonus to incentivize people to invest, not to be an offset against dividend income. The latter could make tax incentives for investing a zero-sum game, which makes no sense.

From a political standpoint, it may be beneficial to demand that American companies not repatriate abroad for tax reasons, but the merger of Burger King with Tim Hortons has a lot more to do with the tight margins in the burger joint business and the more robust margins in the fast-casual restaurant and coffee chain trades. As Burger King struggles with hyper competition from McDonalds, Chipotle, and Starbucks, it needs to explore expansionary opportunities. The fact that Tim Hortons happens to be in Canada – in this case, at least – is incidental.

Moreover, the likely tax savings for Burger King by a tax inversion would only be around $3.4 million this year, given that Canada’s total corporate tax rate is 26.5% and Burger King paid an actual tax rate of only 27.5% last year, which would not be a lot for a company with more than $1 billion in top-line revenues and $340 million in profits on a run-rate basis for 2014. To put it another way, If the management of Burger King agreed to an $11 billion merger simply because of $3.4 million of cost savings, it would be bad management indeed. However, that is not the case here and all signs, when rationally examined, point to the fact that this deal is important for Burger King’s future growth, which will also benefit its employees, shareholders, and customers.

Questioning mergers based on anti-competitive factors is fine, but questioning the wisdom of patently good corporate deals simply because there are ancillary tax benefits is silly. It distracts from larger issues like labor relations and the pressures of global competition on the American economy, while doing nothing to benefit the discussion about tax reform.

This particular example has no real meat, except perhaps in the press.

Sanjay Sanghoee is a political and business commentator. He has worked at investment banks Lazard Freres and Dresdner Kleinwort Wasserstein, as well as at hedge fund Ramius. Sanghoee sits on the Board of Davidson Media Group, a mid-market radio station operator. He has an MBA from Columbia Business School and is also the author of two thriller novels. Follow him @sanghoee. 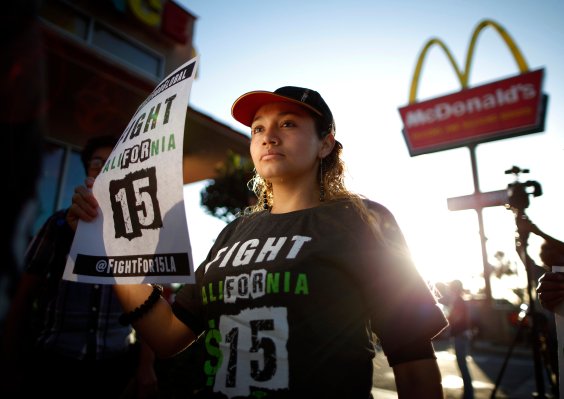 Fast Food Workers Plan Another Strike
Next Up: Editor's Pick