President Barack Obama is weighing whether to postpone a self-imposed deadline to make unilateral changes to U.S. immigration laws as the midterm elections draw near.

But with control of the Senate hanging in the balance, the uncertain ramifications of revamping U.S. immigration law have spurred the White House to reconsider the timing of its announcement. Here’s what we know—and what we don’t—about a decision that could reshape the political landscape in 2014 and beyond.

It was originally supposed to be by the end of summer. On June 30, almost exactly a year after the Senate passed a bipartisan overhaul of the U.S. immigration system, Obama announced he had instructed cabinet officials to prepare reports advising him what executive orders he could legally issue to mend a broken system on his own. “If Congress will not do their job, at least we can do ours,” Obama said. “I expect their recommendations before the end of summer and I intend to adopt those recommendations without further delay.”

Immigration activists and Democratic aides who have pressed Obama to use his executive authority say they now fear the White House may wait until after the midterms to act. “It seems like we’re losing the argument,” says one immigration activist who met with Obama this summer. A Democratic Congressional aide told TIME the White House seemed to be “getting cold feet” about its original timeline.

Blame election season. Democratic campaign strategists believe that a sweeping move to grant deportation relief before November would imperil the reelection bids of several vulnerable Senate incumbents, and have pressed the White House to hold off until at least mid-November. The White House doesn’t want an executive order on immigration to tip tight races to its opponents. And the unresolved child-migration crisis at the southwestern border has further muddied a decision already fraught with political risks. But no matter the timing, Obama still intends to unilaterally reshape U.S. immigration law in the absence of Congressional action. “The president is determined to act,” Earnest said Tuesday. “That has not changed and it will not change.”

Obama’s exact plans are unknown. But he is weighing using his executive authority to grant work permits and deportation relief for several million undocumented immigrants, perhaps through expanding a 2012 program, Deferred Action for Childhood Arrivals (DACA). Obama may also decide to reform immigration enforcement priorities, as well as to offer special protections for specific groups of workers, as business groups have sought.

What might be the political benefits of waiting until after the midterms?

Democratic campaign strategists and some White House officials believe that taking executive action on immigration would jeopardize Democratic Senators who are fighting to stave off challengers in conservative states like Arkansas, Louisiana, Alaska and North Carolina. Control of the Senate may hinge on the outcome of those races. “It would have the unhelpful consequence of putting the issue in the news in a way that doesn’t help Democrats, while also not accomplishing anything,” says a national Democratic strategist.

Of the most competitive Senate races this year, Colorado—which is home to a burgeoning Hispanic population—is perhaps the only one in which aggressive executive orders would be highly likely to benefit the Democratic candidate, Sen. Mark Udall. Democratic campaign strategists argue the move would not only endanger the party’s grip on the upper chamber, but also eliminate the diminishing chance that Congress passes a comprehensive overhaul in the near future. If a move “swings the election,” says the Democratic strategist, “that will set back comprehensive immigration reform for years.”

What might be the political benefits of acting now?

Immigration-reform advocates say that a bold move to protect millions from deportation would cement Democrats’ bond with increasingly frustrated Hispanics, giving the party an edge with the nation’s fastest-growing demographic group for a generation or more. And while it would almost surely help Democrats in 2016—as the creation of DACA did in 2012—it’s not necessarily clear that it would hurt in November.

In addition to thrilling Latinos, expansive executive action would incense conservative Republicans, and potentially incite the GOP’s anti-immigration wing to make damaging remarks that Democrats could wield as campaign cudgels. “It’s a winner coming and going,” says Frank Sharry, head of the pro-immigration reform group America’s Voice. “No matter what he does, the right wing is going to go bonkers,” Richard Trumka, the president of the AFL-CIO, told reporters last week. “If he goes mild, he’ll energize the right, but he won’t energize the center and the left.”

What about splitting the difference?

A third option under consideration, according to White House aides, is that Obama announces some modest executive orders before the election, but holds off until mid-November to announce more sweeping components. This seems unlikely, however, because it minimizes the political rewards but not the risks. Republicans would still assail the President. The issue would still take center stage in the midterms. But Hispanics might view the move as a half-measure from a President who came into office vowing to make immigration reform a priority, but has mostly disappointed them since.

“You cannot, on the one hand, receive a community warmly and embrace them, and say that you are for them and that you’re ready to protect them,” says Rep. Luis Gutierrez, an Illinois Democrat, “and on the other one turn your back on them when you think it’s not in your political self-interest.” Gutierrez has long urged his Democratic counterparts to be patient and let the process of coaxing Republicans to the table play out. In an interview Tuesday, he said it was time for Democrats to stop bowing to political considerations, and for the White House to live up to its commitment to Hispanics.

“I have absolutely no doubt that [Obama] wants to make a broad, bold and generous action,” Gutierrez says. “I hope that Democrats get the hell out of the way and let the President be the President we elected.” 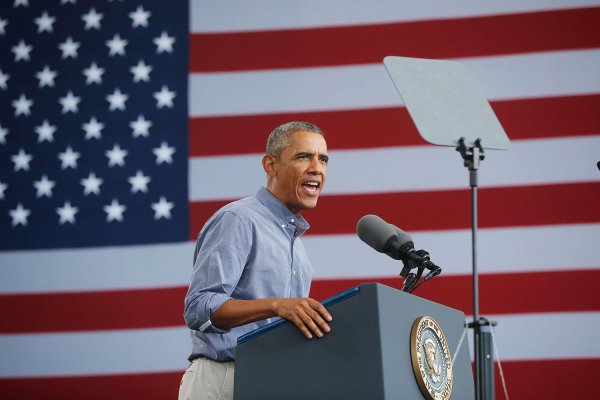 Obama Nods to Immigration
Next Up: Editor's Pick