And boy did Cantor cash out.

Cantor’s $3.4 million compensation package for the next year and four months puts his congressional salary into stark relief. Since he was elected Majority Leader in 2011, Cantor earned $193,400 a year, around $20,000 more annually than a rank-and-file member.

But as Vice Chairman and Managing Director at Moelis, he will receive a $1.4 million signing bonus, $1.6 million in incentive compensation next year and a $400,000 base salary — plus reimbursement for the reasonable cost of a New York City apartment for his first 12 months, and a hotel equivalent rate thereafter.

Cantor wasn’t doing too badly before he left Congress, of course, with the Center for Responsive Politics estimating his net worth in 2012 at around $9.3 million. But the move will certainly bump him into a higher category of wealth.

That said, Cantor won’t be making as much as he might have as a lobbyist, as the seven figure salaries of some former congressmen can attest. Billy Tauzin, a Louisiana Republican congressman who retired in 2005, made $11.6 million in a single year in 2010 while helping to craft President Obama’s Affordable Care Act as leader of the Pharmaceutical Research and Manufacturers of America, according to Bloomberg. Former Connecticut Senator Chris Dodd makes nearly $3.3 million a year as the head of the Motion Picture Association of America. In 2011, former Oklahoma Rep. Steve Largent’s total compensation as CTIA-The Wireless Association’s top lobbyist was reportedly $2.7 million. But it’s hard to quibble with a signing bonus worth more than seven times your annual salary.

The move to Wall Street wasn’t unexpected as Cantor, one of the Republican party’s most prolific fundraisers, had close ties to the financial services industry. Three of Cantor’s top campaign contributors during the most recent election cycle were investment firms Blackstone Group, Scoggin Capital Management and Goldman Sachs, according to the Center for Responsive Politics. Chris Jones, a managing partner of CapitalWorks, predicted to TIME in June that Cantor would take a “prominent role” at a major bank. 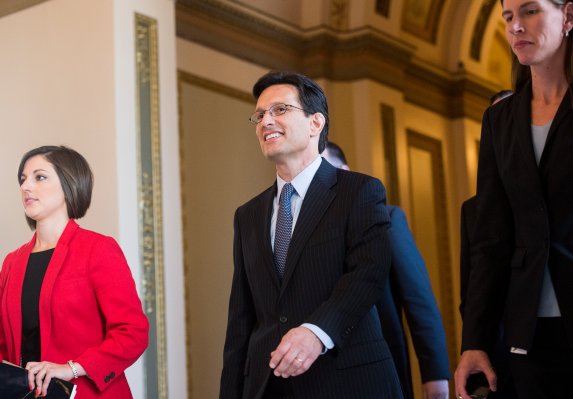 Eric Cantor Cashes In
Next Up: Editor's Pick