The Best Response Ever to a Celebrity Nude Photo Scandal

The details of the celebrity photo-hacking scandal that came to light over the weekend are distinctly modern: the unauthorized sharing of private photographs of stars like Jennifer Lawrence and Kate Upton was the work of hackers, who appear to have used a vulnerability in Apple’s iCloud security.

But this kind of scandal is no digital age invention.

In 1949, a young Marilyn Monroe — a model whose short film career at the time comprised such roles as “waitress” and “voice, uncredited” — was overdue on her rent. She solved the problem by posing nude for photographer Tom Kelley, a photo shoot that didn’t lead to much of anything at first.

Years went by. Monroe became much more than just another model. By 1952, when the photo eventually appeared in a popular calendar, she was a star. According to TIME’s coverage of the calendar’s popularity, her bosses at the film studio “begged her” to deny that the woman in the photo was her, but she wouldn’t do so. That turned out to be a move that only increased her star power.

There are some major difference between these two moments — most importantly that Monroe posed for her photo knowing it was for public consumption — but that doesn’t mean they’ve got nothing in common, as Anne Helen Petersen, writing at BuzzFeed, points out. Petersen says that Monroe’s decision to shrug off the photograph as no big deal was “brilliant.” That’s a lesson that the hacking victims can use, as they decide how to respond to the public revelation of their private activities. For Monroe, it was more than a chance to prove the studios wrong — it was also the event that led to one of her most famous lines. When asked whether she really had nothing on during the photo shoot, as TIME reported on Aug. 11, 1952, “Marilyn, her blue eyes wide, purred: ‘I had the radio on.'”

Read TIME’s full 1952 report on Marilyn Monroe here: Something for the Boys 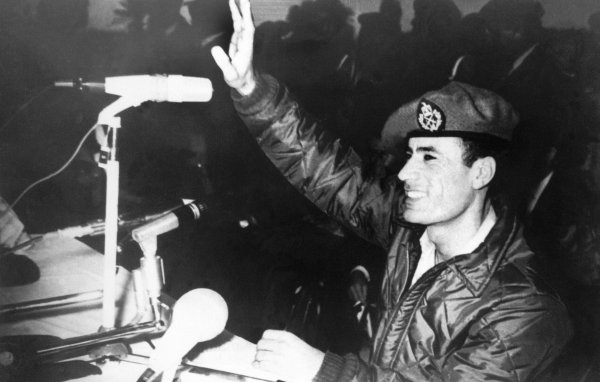 Gaddafi Before the Gold-Plated Guns
Next Up: Editor's Pick