Liberian Government's Blunders Pile Up in the Grip of Ebola

People celebrate in a street outside of West Point slum in Monrovia, Liberia, Aug. 30, 2014. Crowds cheer and celebrate in the streets after Liberian authorities reopened a slum where tens of thousands of people were barricaded amid the countryís Ebola outbreak.
Abbas Dulleh—AP
By Clair MacDougall

In a cramped bar down a dark alleyway of Monrovia’s sprawling seaside slum West Point, residents are dancing wildly. They shuffle and stomp across a concrete floor sprinkled with cigarette butts and splashed with beer and homemade liquor.

“We celebrating! We are out of jail!” says Mary Goll, a resident and local bar owner, who leans back to the bar crisscrossed with metal for security for another bottle of beer. Goll’s own bar is in ruins on the shoreline, half eaten by the Atlantic Ocean. Just as the ocean has eroded away the land and driven the community inwards, so too did a government-ordered quarantine imposed last week.

On Aug. 20, the Liberian government enforced a 21-day quarantine aimed at preventing the spread of the virus that has claimed close to 700 lives throughout the country, with cases and casualties mounting in the city. Médecins Sans Frontières has described the outbreak in Monrovia as “catastrophic” and the 120 beds in its treatment center in the capital are already full. The World Health Organization has said the epidemic could last for six to nine months and infect up to 20,000 people in the region before the outbreak is over. Liberia is now the only Ebola-affected nation in the region with rising cases in the capital.

On Friday Aug. 30, just 10 days into the quarantine, the government announced on radio it would be lifting the quarantine the next morning. At 6am the next morning, police and soldiers took away their barbed wire and makeshift wooden checkpoints. West Pointers have been celebrating ever since — but the government seems just as unsure how to combat the virus as it has been since the outbreak began.

The plan to cordon off this community of some 80,000 people was made after a holding center for victims was ransacked on Aug. 15, one week after Liberia declared a state of emergency. Suspected Ebola patients escaped, and looters stole infected materials and mattresses from the center. President Ellen Johnson Sirleaf told Katie Couric the attack had motivated the quarantine because the attack “put the entire community at risk, therefore we had to protect them from themselves.”

But sources monitoring the security sector say the decision was less about the community’s safety and more a political attempt to show the government was in control of the situation. It had already blundered early in the outbreak by failing to prevent Patrick Sawyer, a consultant to the Ministry of Finance, from traveling to Lagos, despite the fact he was under observation having been in contact with a sister who died of Ebola. Sawyer, a naturalized U.S. citizen, died in Nigeria July 25 but not before infecting several people in Africa’s most populous country.

The government compounded that error with its lack of transparency. A day before the quarantine was imposed the Minister of Information Lewis Brown said the 17 patients who escaped were found and taken to an Ebola clinic at John F. Kennedy Medical Center, a claim that was denied by a doctor at the clinic. The Ministry of Health has since failed to provide concrete data on the number of suspected or confirmed cases in West Point despite requests.

Then, the first day of the quarantine came. As armed police wearing helmets and riot shields attempted to prevent West Point residents entering the rest of the city, the town commissioner Miatta Flowers attempted to escape with her family, to the fury of onlookers. Some began throwing rocks at police and others tried to escape across a makeshift checkpoint made of concertina looped between wooden benches.

Security forces opened fire and killed a 15-year-old boy named Shakie Kamara; another two young men were also wounded by gunfire. The teenager’s body was taken by Ministry of Defense officials, according to a news report, and buried without an autopsy. Only later that day did the police commissioner explain to residents food would be distributed and they would be inspected by teams from the Ministry of Health.

It was yet another major mis-step on behalf of the government. The quarantine had not been sanctioned by the international donor community, and Dr. Nestor Ndayimirije, the World Health Organization representative to Liberia, had warned quarantining would only work with the community’s consent, which was neither gained nor sought.

“The force was disproportionate, they were already using batons, sticks, they had access to teargas and equipment to things to control an unarmed crowd,” said Counsellor Tiawan Gongloe, Liberia’s most prominent human rights lawyer. “I find it difficult to believe that there was any justification for shooting a 15-year-old boy who was unarmed. This is not a militarized conflict, it is a disease situation and a biological problem.”

It’s not hard to see why the government felt it needed to act. The cramped quarters, lack of access to running water and poor sanitary conditions of slum communities like West Point put them at a high risk of becoming hot spots for new Ebola infections. But Gongloe says the government has not been clear about what powers it has under a state of emergency, and has not been consistent in how it has used them. “[The government] must have an even handed approach to strengthen public trust in the government in order to fight Ebola,” Gongloe told TIME.

That public trust has been further eroded by the large number of public officials who fled the country after Sawyer’s death. Johnson Sirleaf said on Aug. 11 that government officials who refused to return home from overseas would be declared AWOL, and the Executive Mansion announced last week it had fired all but a handful of those who had still not returned. But she neglected to name those who had been fired, and many are skeptical she will follow through.

The government exodus contributes to a sense among citizens that Liberia’s wealthy and powerful have left the country’s poor to fend for themselves. Many expatriates who work for non-governmental organizations and international companies have been evacuated and their lavish apartments with 24-hour electricity and running water are now empty.

Most Liberians didn’t have that choice. Francis, a 15-year-old homeless youth who sometimes sleeps in one of the roughest communities in West Point, had to grease a palm to escape before the quarantine was lifted. He says he made his way out of West Point by paying an army man 150 Liberian Dollars (about $1.77 in U.S. dollars). The back of Francis’ head aches with an infected wound he says was made by a policeman who hit him with a baton as he tried to break free on the first day of the quarantine. It will be a while before Francis returns to West Point. 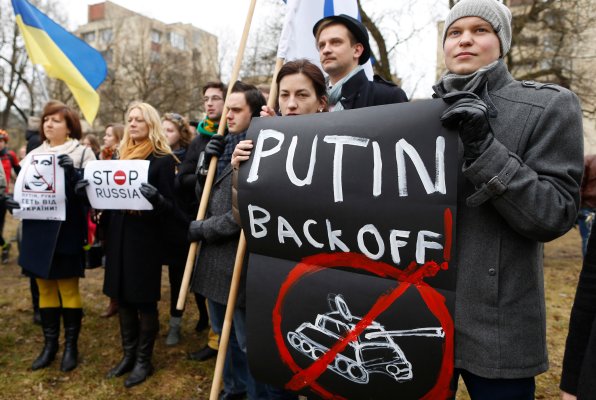 Baltic States Fear Putin Amid Escalation in Ukraine
Next Up: Editor's Pick