The Senate’s top foreign policy official was unequivocal on Sunday: Ukraine needs weapons from the West to defend itself against Russian aggression.

“We should be providing the Ukrainians with the type of defensive weapons that will impose a cost upon Putin for further aggression,” Menendez told CNN from Kiev, where he is on a fact-finding mission. “We have to give the Ukrainians the fighting chance to defend themselves.”

Menendez went on to describe the Kremlin’s incursions in Ukraine as a “direct invasion.”

The Democrat from New Jersey stopped short of suggesting that American or NATO troops should be deployed in Ukraine.

The senator’s words come as President Barack Obama prepares to visit Estonia next week, before heading to the U.K. for a NATO summit, where the alliance’s representatives will discuss the increasingly violent conflict in Ukraine.

The Obama administration continues to advocate for the isolation of Russia through targeted economic sanctions, while providing the embattled government in Kiev with non-lethal aid.

On Aug. 6, Obama said that if Russia were to launch an invasion of Ukraine, the White House’s calculus might change.

“Now if you start seeing an invasion by Russia, that’s obviously a different set of questions. We’re not there yet,” Obama told reporters at the time.

However, last week NATO published satellite images that appeared to show Russian armored columns fighting in Ukrainian territory in a bid to prop up the pro-Moscow insurgency that has been taking place since April.

In the face of mounting evidence, more politicians are advocating that the U.S. take firmer action against the Kremlin.

“I think it is appropriate to up that level of aid, to make them a more capable fighting force to resist this incursion and to make it as painful as possible for Putin to make any progress in the Ukraine,” Congressman Adam Smith, the ranking member on the House Armed Services Committee, told CBS’s Face the Nation on Sunday. 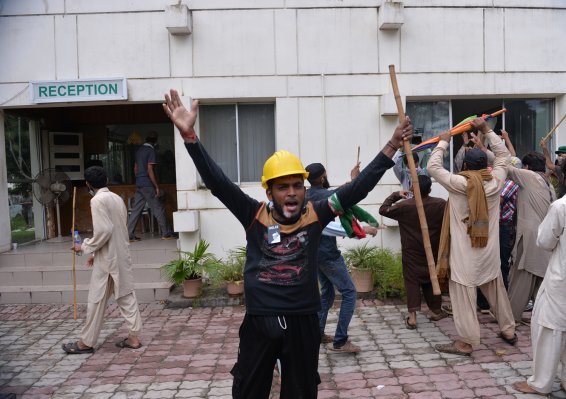