This Man Will Be Your President If the Worst Happens

If the unthinkable happens during Tuesday night’s State of the Union address, Secretary of Energy Ernest Moniz will assume the role of President of the United States.

Moniz, the 12th person in the line of succession for the Oval Office, will be protected by Secret Service agents at an undisclosed location as the so-called “designated survivor” while President Barack Obama delivers his address to Congress. Meanwhile, the vice president, members of the Cabinet, Supreme Court justices and others will gather at the Capitol to listen to the president’s annual address.

The nuclear physicist was a longtime faculty member at the Massachusetts Institute of Technology before he was sworn in on May 21, 2013. Moniz is no stranger to the federal government or the White House, having served as under secretary of the Department of Energy and White House staffer during the Clinton administration. He’s better liked inside the administration than his predecessor—and last year’s designated survivor—Steven Chu, who was considered by some administration officials to be a political loose cannon.

Moniz is probably best known for his hair styling, which has led to comparisons with Oscar Wilde and Javier Bardem in No Country for Old Men.

The idea of having a designated survivor originated during the Cold War over fears of a nuclear attack wiping out the country’s political and military leadership. Traditionally a lower-level Cabinet officer is selected, so that high-profile members will be seen in audience shots during the president’s address. The role took on a more serious note after the attacks of Sept. 11, 2001, with tightened security and secrecy. 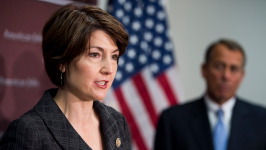 Who is Cathy McMorris Rodgers?
Next Up: Editor's Pick