Garry Kasparov: It's a War, Stupid!

A pro-Russian rebel walks in a passage at a local market damaged by shelling in the town of Donetsk, eastern Ukraine, on Aug. 26, 2014
Mstislav Chernov—AP
By Garry Kasparov

As Russian troops and armored columns advance in eastern Ukraine, the Ukrainian government begs for aid from the free world it hoped would receive it and protect it as one of its own. The leaders of the free world, meanwhile, are struggling to find the right terminology to free themselves from the moral responsibility to provide that protection. Putin’s bloody invasion of a sovereign European nation is an incursion, much like Crimea — remember Crimea? — was an “uncontested arrival” instead of anschluss. A civilian airliner was blown out of the sky just six weeks ago — remember MH17? — and with more than 100 victims still unidentified, the outrage has already dissipated into polite discussions about whether it should be investigated as a crime, a war crime or neither.

This vocabulary of cowardice emanating from Berlin and Washington today is as disgraceful as the black-is-white propaganda produced by Putin’s regime, and even more dangerous. Moscow’s smoke screens are hardly necessary in the face of so much willful blindness. Putin’s lies are obvious and expected. European leaders and the White House are even more eager than the Kremlin to pretend this conflict is local and so requires nothing more than vague promises from a very safe distance. As George Orwell wrote in his 1946 essay on language right before starting work on his novel 1984 (surely not a coincidence): “But if thought corrupts language, language can also corrupt thought.” The Western rhetoric of appeasement creates a self-reinforcing loop of mental and moral corruption. Speaking the truth now would mean confessing to many months of lies, just as it took years for Western leaders to finally admit Putin didn’t belong in the G-7 club of industrialized democracies.

Ukrainian President Petro Poroshenko just met with U.S. President Barack Obama in Washington, but Obama’s subsequent statement showed no sign he’s willing to acknowledge reality. Generic wishes about “mobilizing the international community” were bad enough six months ago. Hearing them repeated as Ukrainian towns fall to Russian troops is a parody. (If legitimacy is what Obama is after, Russia is clearly in violation of nearly every point of the 1974 U.N. Resolution 3314, “definition of aggression.”) Perhaps Poroshenko should have matched Obama’s casual wardrobe by wearing a T-shirt that read, “It’s a War, Stupid.” As Russian tanks and artillery push back the overmatched Ukrainian forces, Obama’s repeated insistence that there is no military solution in Ukraine sounds increasingly delusional. There is no time to teach a drowning man to swim.

The U.S., Canada and even Europe have responded to Putin’s aggression, it is true, but always a few moves behind, always after the deterrent potential of each action had passed. Strong sanctions and a clear demonstration of support for Ukrainian territorial integrity (as I recommended at the time) would have had real impact when Putin moved on Crimea in February and March. A sign that there would be real consequences would have split his elites as they pondered the loss of their coveted assets in New York City and London.

Then in April and May, the supply of defensive military weaponry would have forestalled the invasion currently under way, or at least raised its price considerably — making the Russian public a factor in the Kremlin’s decisionmaking process much earlier. Those like me who called for such aid at the time were called warmongers, and policymakers again sought dialogue with Putin. And yet war has arrived regardless, as it always does in the face of weakness.

As one of the pioneers of the analogy I feel the irony in how it has quickly gone from scandal to cliché to compare Putin to Hitler, for better and for worse. Certainly Putin’s arrogance and language remind us more and more of Hitler’s, as does how well he has been rewarded for them. For this he can thank the overabundance of Chamberlains in the halls of power today — and there is no Churchill in sight.

As long as it is easy, as long as Putin moves from victory to victory without resistance, he gains more support. He took Crimea with barely a shot fired. He flooded eastern Ukraine with agents and weaponry while Europe dithered. The oligarchs who might have pressured Putin at the start of his Ukrainian adventure are now war criminals with no way back. The pressure points now are harder to reach.

The Russian military commanders, the ones in the field, are not fools. They are aware that NATO is watching and could blow them to bits in a moment. They rely on Putin’s aura of invincibility, which grows every day the West refuses to provide Ukraine with military support. Those commanders must be made to understand that they are facing an overwhelming force, that their lives are in grave danger, that they can and will be captured and prosecuted. To make this a credible threat requires immediate military aid, if not yet the “boots on the ground” everyone but Putin is so keen to avoid. If NATO nations refuse to send lethal aid to Ukraine now it will be yet another green light to Putin.

Sanctions are still an important tool, and those directly responsible for commanding this war, such as Defense Minister Sergei Shoigu must be held accountable. Sanctions must also broaden. The chance to limit them only to influential individuals and companies is over. The Russian people can change Putin’s course but have little incentive to take the great risks to do so under current conditions. Only sanctions that bring the costs of Putin’s war home can have an impact now. This was always a last resort, and it wouldn’t be necessary had the West not reacted with such timidity at every step. (The other factor that is already dimming the Russian people’s fervor is the Russian military casualties the Kremlin propaganda machine is trying so hard to cover up.)

As always when it comes to stopping dictators, with every delay the price goes up. Western leaders have protested over the potential costs of action Ukraine at every turn only to be faced with the well-established historical fact that the real costs of inaction are always higher. Now the only options left are risky and difficult, and yet they must be tried. The best reason for acting to stop Putin today is brutally simple: it will only get harder tomorrow.

Kasparov is the chairman of the New York City–based Human Rights Foundation. 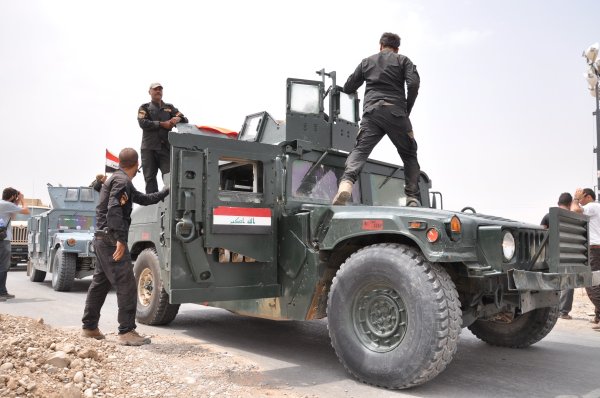 How Hope for a Kurdish State Vanished Overnight
Next Up: Editor's Pick