ADHD in Adulthood: To Prepare for a New Baby, I Had to Prepare My Mental Health

This fall I’m expecting the birth of my second child, a daughter. Over the past months she’s grown from the size of a kumquat, to the size of a banana, and recently achieved the esteemed gradation of cabbage. From what I can tell the final step is cantaloupe—and then, having triumphed through the full prenatal catalog of produce, Sylvia Denevi, the newest member of our family, will be here.

For now the focus is on preparation. My wife and I live in a suburb of Washington, D.C., with our seven-year-old son, Jack. Together we’ve begun to make the expected adjustments. The guest room is now a nursery. The garage has been searched and reorganized, its assortment of baby gear emerging again like relics from a previous life.

I see my preparation for Sylvia’s arrival as love: the first opportunity I have to tell her I love her, that she’s precious to me, that I’ll do whatever it takes to be the best father I can be. I’ve also been taking the steps to prepare myself, within the context of mental health, for the change that’s about to come.

Growing up in the 1980s and 90s, I was part of the first generation of Americans to be diagnosed with Attention Deficit-Hyperactivity Disorder. There was never really a question of whether or not I had ADHD, and after years of being the most active, over-sensitive, and impulsive person in the room—after a childhood of psychiatric and psychological treatments, some of which helped, others making things worse—I graduated from college and entered the workforce, at which point my personality no longer seemed as exaggerated and out-of-whack as it had once been. In the end I figured that whatever ADHD was, it was a part of the past.

That understanding changed when Jack was born. At the time I was 27. All at once I found myself surrounded by an enormous amount of conflict—the same kind I used to experience, growing up, when my behavior would drive the people around me crazy. It was uncanny: my wife would say something, and I’d overreact, and she’d say something else, and then I’d be shouting, and glaring, and shouting again. We argued constantly over the new demands: diaper changes, midnight feedings, who got to take a midday nap and who had to do the grocery shopping. Soon enough our lives began to resemble a ledger. I did this and you didn’t do that. My time is just as important than yours! You want to go to the gym for an hour but I can’t play softball tomorrow night? Instead of finding a way to share the new amount of work that was required of us, we spent hours fighting.

My wife is a scientist, thoughtful and logical, traits that have always fit well with my more energetic demeanor, and up until Jack was born our relationship was steady. But now it seemed as if our personalities had switched; at the end the day she’d be yelling at me and I’d turn sullen and depressed.

I felt overwhelmed. Like I couldn’t do the simplest things. It was as if I was underwater, gazing up toward a normal reality—one in which every other new parent seemed to deal well enough—while I was the abnormal one, a failure, once again a problem for the people who loved me. It was the most distant I’d felt from my wife since we’d been together.

“You’ve never been like this,” she told me. And while there were other variables involved—we’d moved across the country right after Jack was born, were at precarious points in our careers, and didn’t have extended family around to help—it was clear that if I didn’t act soon I’d run the risk of damaging my relationship with my family in a way that couldn’t easily be undone.

Eventually I went to see my family doctor, and then a psychiatrist. When I explained my moodiness and agitation they said the same thing: ADHD, even in adulthood, tends to make you much more sensitive than other people to your surrounding environment. If you’re constantly feeling restless and impulsive, you might react to demands in a disproportionate way—and there are few things more destabilizing than the birth of a child.

There wasn’t one thing I could do to magically make things better, they told me—that’s not how mental illness works. Instead, they recommended a series of steps. For the first time I started exercising regularly; I paid careful attention to my sleeping and eating habits; I even went on a low dosage of Adderall, which helped to make everything seem less drastic and overwhelming.

Eventually things improved, but not right away. It was a genuinely hard stretch for my wife and I—part of the reason, no doubt, we’ve waited a while to have another baby. But now, seven years later, as the summer turns to fall and Sylvia continues in her ascension through an aisle at the grocery store, we can take solace in the fact that we both have a much better idea of the changes to expect.

Soon enough we’ll find ourselves short on sleep. And time. And stamina. I’ll be less resilient in terms of mood and patience. In anticipation I’ve been trying to make the necessary preparations.

I started psychotherapy, visiting a psychologist regularly both by myself and with my wife. I’ve set up my exercise schedule with an emphasis on cardiovascular activities like running and tennis, the most beneficial to mental health. I’m trying to cut down on social events and alcohol—two things I very much enjoy. And I find myself making observations about my own sleeping and eating that are usually directed at seven-year-olds: Do you really think it’s a smart decision to start another television show this close to bedtime? If you’re sweating and your stomach already hurts, maybe that fifth piece of pizza isn’t the best decision…

I’ve also talked with my psychiatrist about the possibility of making a medication adjustment. (I hate being on medication anyway, and prefer to take as low as dose as possible.) The Adderall I’m on is the instant-release kind; my current approach is to take it ahead of time when I know I’m about to find myself in situations that are especially overwhelming or agitating—a birthday party for one of Jack’s friends at Chuck E. Cheese; driving through an unfamiliar snarl of D.C. traffic—but what happens when the foresight necessary for such an approach is already eroded by a lack of sleep and/or a screaming infant? I can try a time-release version, or a new medication.

One of the most difficult aspects of mental illness, especially within the context of parenthood, is finding a way, when it comes to your life and its influence on the people you love, to do more good than harm. In the end you can’t possibly predict what’s really coming: the moment in the future that will dislodge you from the balance you’ve worked so hard to achieve. It might be a random calamity, or one you’ve personally brought about. But the incredible truth is that it’s already on the way. And against such a prospect, what good can something like a therapist or exercise or a low-dosage pyschostimulant actually do?

This isn’t to dismiss the idea of effort. In fact it’s the opposite: imagining all the things that could go wrong or right for my family, I can’t help but find solace in action. I’m lucky that there are steps I can take, and that often enough they do tend to help. What matters is the act itself: an expression of love for the most important people in my life. After all, there are many ways to show how you feel; is it so terrible that one of mine happens to take the form of self-preparedness?

A few weeks ago, when Jack was looking through the toys in his closet and trying to guess which, if any, his future sister might enjoy, he turned to me and said, “Daddy, I have a question.”

I could tell by the line of his mouth that it was something he’d been considering for a while. “Yeah?”

Briefly the image of a pumpkin with very long eyelashes flashed into my mind, but in the next instant was something outside the parameters of size and shape: an emotion similar enough to anticipation. “A little like you,” I said. “And like Mommy. A little like me, too, I think.”

“That’s the exciting part,” I added. “Whoever she’s going to be, she’ll be herself.”

Timothy Denevi is the author of Hyper: A Personal History of ADHD, out this week from Simon & Schuster. He received his MFA in nonfiction from the University of Iowa. He lives near Washington, DC and teaches in the MFA program at George Mason University, where he’s a visiting writer. 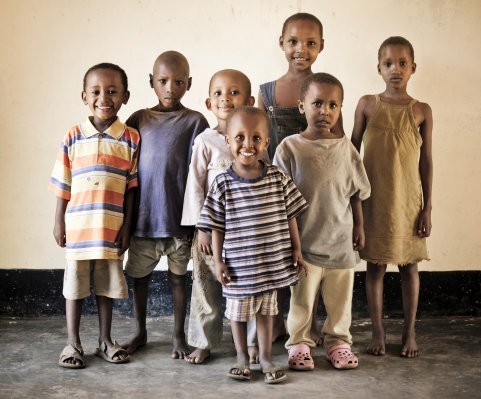 Maybe Orphanages Aren't So Bad After All, Study Says
Next Up: Editor's Pick