A Tale of Two 9-Year-Olds: The One on the Playground, and the One With an Uzi

Parents who allow their 9-year-old to play unsupervised at a playground can be arrested, but handing a nine-year-old an Uzi is perfectly acceptable.

Unfortunately, that’s not hyperbole. It’s just the sad state of affairs in which we find ourselves, after a 9-year-old New Jersey girl accidentally shot and killed her instructor at a firing range in Arizona. The girl’s parents paid for her to fire a fully automatic machine gun, but she lost control of the weapon and shot her instructor, Charles Vacca, killing the military veteran.

The chilling ordeal was caught on tape, courtesy of the girl’s parents, but Arizona police officials have said no charges will be filed or arrests made. The Mohave County Sheriff’s Office concluded the incident was an “industrial accident,” and have contacted the Occupational Safety and Health Administration to investigate, according to published reports.

Let’s compare that to a story from earlier this summer, regarding a different 9-year-old, one in South Carolina.

Debra Harrell is a working mother who faces a common problem for parents when school lets out for the summer: finding affordable child care. The McDonald’s employee couldn’t afford to have someone watch her 9-year-old daughter, so the girl was playing on her laptop in the restaurant during her mother’s shifts. However, when that laptop was stolen from their home, Harrell armed her daughter with a cell phone in case of an emergency and let her go unsupervised to an area playground. Another parent noticed the girl there alone and contacted the police, at which point Harrell was arrested and charged with child neglect. If convicted, she faces up to 10 years behind bars.

Is anyone else absolutely scared to death of the horrendous message we’re sending to parents?

Regarding the incident in Arizona, we’re talking about two parents who willingly paid $200 to put a fully automatic weapon in the hands of their 9-year-old daughter. This poor girl, who should’ve been learning to shoot with a .22 rifle or some other weapon she could handle (if indeed she had to learn to fire a gun) was given an Uzi capable of firing up to 600 rounds per minute—creating a recoil difficult for some adults to handle.

And the scariest part? The firing range has a minimum age of eight years old to fire such weapons – one year younger than the girl who is now surely scarred for life. The terrible judgment of the New Jersey parents (combined with the operators of the firing range to allow kids that young to fire Uzis) directly contributed to a man’s death. That stands in stark contrast to Harrell’s troubles in South Carolina.

Instead of a loaded weapon, Harrell armed her daughter with a phone, and sent her to a playground with lots of other kids and adults. The only shooting that took place was the cool water from a splash pad and some hoops on the basketball courts. There were even volunteers who came by the playground with free snacks. While perhaps not ideal since Harrell was at work, she sent her daughter to a family-friendly place with an environment geared toward fun and summertime frivolity. The same kind of place I routinely rode my bike to at the age of nine.

Yet Harrell is the one arrested. Who lost her job. Who spent 17 days in jail, temporarily lost custody of her daughter, and faces 10 years in prison.

So, when considering charges for the neglect of a child, playgrounds seem to be a greater threat in the eyes of the law than guns. And that is a travesty.

Wherever you fall in this country’s ongoing debate about guns and gun control, this should upset you. It should infuriate you. It should alert you to our disturbingly warped gun culture, and should be more than enough proof that change is desperately needed. And parents, let me state this unequivocally: It is never acceptable to let your 9-year-old fire an Uzi. Never. Under any circumstances.

Harrell’s detractors claim someone could’ve kidnapped her daughter at the playground, which is true. But while there is a low risk of child abduction at a public playground in broad daylight, it pales in comparison to the risks involved with letting a 9-year-old fire a machine gun. So please stop referencing the 2nd amendment, because I’m certain our Founding Fathers weren’t contemplating the benefits of letting children fire hundreds of rounds per minute when they drafted the right to bear arms.

If you’re a parent, you should be absolutely terrified that a 9-year-old’s constitutional right to fire an Uzi trumps your right to decide at what age your kids can play at the park unsupervised.

Something has to change. Now. 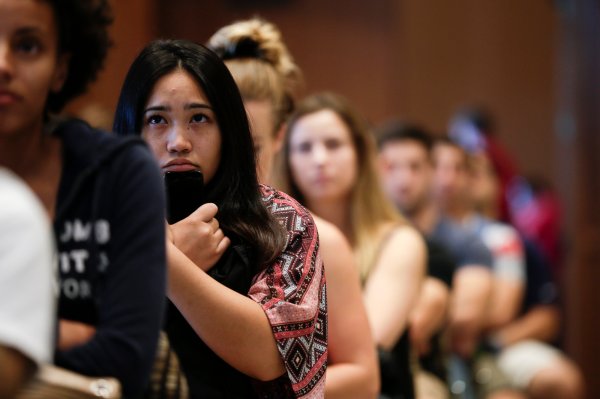 Campus Rape: The Problem With 'Yes Means Yes'
Next Up: Editor's Pick