An independent autopsy released Thursday declared that Clayton Lockett, an Oklahoma death row inmate whose botched execution in April caused the state to temporarily halt executions, died from “judicial execution by lethal injection” and not from a heart attack, as prison officials had concluded at the time.

The autopsy, conducted by the Southwestern Institute of Forensic Sciences in Dallas, Texas, detailed multiple locations where officials attempted to inject Lockett, including in the groin, chest, neck, both arms and one of his feet. Several puncture wounds were found in his neck and chest, the autopsy said.

Oklahoma executed Lockett, convicted in the 1999 murder of Stephanie Neiman, using a three-drug lethal injection protocol that included midazolam, vecuronium and potassium chloride. The execution took 51 minutes as prison officials struggled to find a vein to properly administer the drugs.

Oklahoma Department of Corrections Director Robert Patton has said that one of Lockett’s veins collapsed during the execution, which led officials to search for other access points. Ultimately, state executioners administered the drugs through Lockett’s groin, a highly unusual move. During the procedure, Lockett reportedly writhed and groaned on the execution table. Halfway through, prison officials used a curtain to block views of the chamber from those watching the execution in a nearby viewing room.

Following the lethal injection, Patton announced that Lockett died of a heart attack and that one of the lines had become dislodged and likely leaked drugs into the inmate’s surrounding tissues rather than directly into the bloodstream.

The independent autopsy released Thursday, however, found traces of all three drugs in Lockett’s system and declared that he died from the administered drugs. But the autopsy did not address the questions surrounding the prolonged execution and why it was so problematic.

“What this initial autopsy report does not appear to answer is what went wrong during Mr. Lockett’s execution, which took over 45 minutes, with witnesses reporting he writhed and gasped in pain,” said Dale Baich, an attorney for Oklahoma death row prisoners, in a statement.

Gov. Mary Fallin has ordered a review of the state’s execution procedures that is still ongoing while the Oklahoma Court of Criminal Appeals has delayed all executions in the state until November. The next lethal injection is set for Nov. 13. 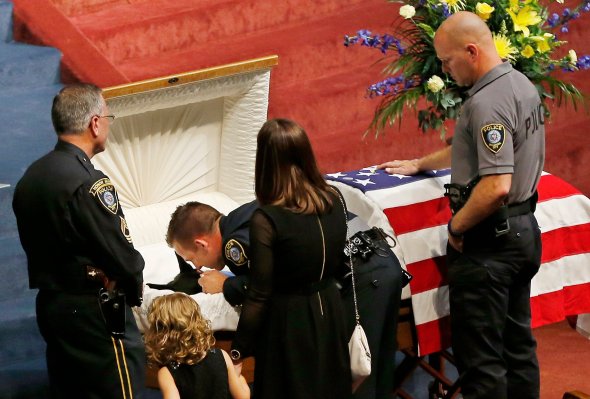