Hillary Clinton on Ferguson: 'We Are Better Than That'

Former Secretary of State Hillary Clinton made her first public comments Thursday on the shooting of unarmed teenager Michael Brown in Ferguson, Mo., calling for the country to address “inequities” in the criminal-justice system.

The likely 2016 Democratic presidential candidate addressed both the shooting and the days of often violent protests that followed, saying, “This is what happens when the bonds of trust and respect that hold any community together fray.”

Clinton’s comments came at the end of a paid speaking appearance in San Francisco. She said her “heart just broke” for Brown’s family after the unarmed 18-year old was shot by police officer Darren Wilson more than two weeks ago. She also condemned the “terrible” images on television of heavily armed police facing off with largely peaceful protesters. “Nobody wants to see our streets look like a war zone,” she said. “Not in America, we are better than that.” And Clinton called for a renewed focus on reforming the nation’s criminal justice system, saying the country must confront lingering unfairness.

“We can’t ignore the inequities that persist in our justice system that undermine our most deeply held values of fairness and equality,” she said.

“Imagine what we would feel and what we would do if white drivers were three times as likely to be searched by police during a traffic stop as black drivers, instead of the other way around,” Clinton said, “if white offenders received prison sentences 10% longer than black offenders for the same crimes, if a third of all white men — just look at this room and take one third — went to prison during their lifetime. Imagine that. That is the reality in the lives of so many of our fellow Americans and so many of the communities in which they live.”

Clinton noted that her remarks fell on the 51st anniversary of Martin Luther King Jr.’s “I Have A Dream” speech during the 1963 March on Washington. “That mission is as fiercely urgent today as when he stood on the steps of the Lincoln Memorial in the hot August sun all those years ago,” she said. “So we have a lot of work to do together.” 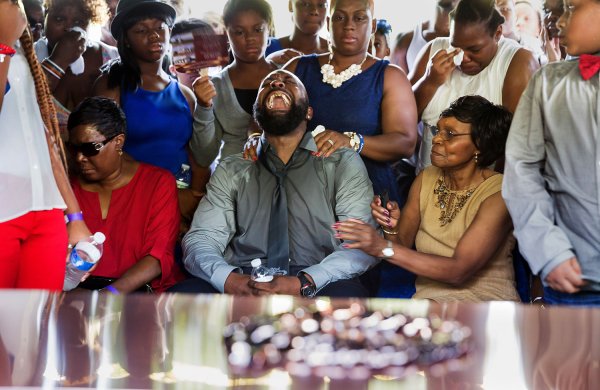 Ferguson Asks What's Next After Michael Brown's Funeral
Next Up: Editor's Pick