Angelina Jolie and Brad Pitt got married last weekend at their magical fairy castle in France. Mazel tov! I would hate to deny anyone their happiness and tell them they can’t get married when they’re in love. Oh wait, except that is exactly what the federal government tells countless gay couples every day by refusing to recognize their rights to get married. Angie and Brad spoke out in support of gay marriage many times and even vowed they wouldn’t say their marriage vows until everyone could. Guess what, Mr. and Mrs. Pitt, not everyone can get married, so how good is your promise?

Back in a 2006 Esquire article, Brad said that he and Angie “will consider tying the knot when everyone else in the country who wants to be married is legally able.” I can’t tell you how much this meant to gays and lesbians all over the country. They were two of the first celebrities to draw attention to the fight for marriage equality and did it before marriage was legal in states like New York, Connecticut, Iowa, California and a growing number every year. This brought international attention to the cause and showed that they were principled people who were willing to put their beliefs before their convenience.

Now they got married in France and it just all seems like a ruse. Maybe they just meant that they would get married somewhere, like France, where marriage is legal for all couples and has been since 2013? It’s like their trans-Atlantic knot tying is some sort of logistical and semantic alley-oop around the vow that they already took to the gay community. “Oh, well, if we do it in France maybe the gays won’t notice.” Sadly, when it comes to same-sex marriage, what happens in France stays in France. In fact, if I went to France and married a Frenchman (let’s call him Pierre), it wouldn’t even be recognized in a majority of states in this great nation of ours. That shows you how good getting married in France is. (Remember when we were changing “French” to “freedom?” Not when it comes to same-sex marriage!)

Still it seems like what Brad and Angie said the first time around doesn’t matter to them at all. It’s as if they didn’t want to get married in 2006 and said, “What if we say it’s because gay people can’t get married? Then people will stop bothering us about getting hitched and we’ll look so noble.” Now that they’ve had their ceremony and the wedding cake is in the freezer, it looks like their declaration was mercenary rather than thoughtful. In 2012, shortly before their engagement became national news, Pitt told The Hollywood Reporter, “We made this declaration some time ago that we weren’t going to do it till everyone can. But I don’t think we’ll be able to hold out.” They even knew they were breaking their word but didn’t seem to care anymore.

I’m sorry, Brangelina, but real fighters for civil rights don’t buckle under pressure when it gets hard. The couple says that their legal union means a lot to the children and that’s why they did it. What about teaching their children about standing up for what you believe in, even when it’s tough and unpopular? What if one of their children grows up to be gay and still can’t get legally hitched? What about all the gay and lesbian couples out there they inspired? What about all the straight mothers and fathers and siblings they enlisted to fight for marriage equality with their once-selfless act? What about the other celebs like Charlize Theron and Kristen Bell who have taken a similar pledge? Well, they don’t have to stick by their word either anymore. In 2013, a year after Brad and Angelina announced their engagement, Kristen Bell and Dax Shepard got hitched too. Now that the biggest celebrities in the Hollywood firmament aren’t keeping their pledge, looks like no one else has to either.

I’m sure their choice to walk down the aisle was a difficult decision that required plenty of discussion, but, to the masses not able to penetrate their very closed doors, it appears as though the couple suddenly thought, “Hey, what they heck, let’s get married.” Well, there are still millions of people who don’t even have that option. What are they supposed to do? Are their rights not worth fighting for anymore? Apparently not. Gay Americans won’t have full equality until we can get married on a whim too, like a drunk Britney Spears in Las Vegas.

Maybe they thought that we’ve come far enough in our fight for marriage equality that they don’t need to be spokespeople anymore. After all, gay marriage is legal in 19 states in the country and the constitutional bans on same-sex marriage have been struck down in Utah, Michigan, Arkansas, Wisconsin,and Indiana. Heck, the Supreme Court even said the Defense of Marriage Act is unconstitutional. It’s only a matter of time before Neil Patrick Harris and his partner will have the same status as Angelina and Brad from the red wood forest to the Gulf Stream waters. And when that day comes, we’ll remember who stood with us not just when it was convenient or trendy, but for the entire fight to secure full marriage rights for all Americans.

Now, I recognize that with these two we’re talking about a couple of literal good-doers. Brangelina has always put their money where their beautiful mouths are, even donating $100,000 to fight Proposition 8, the California law that blocked gay marriage in the state. If they’re going to break their pledge and get married, the least they can do is make a sizable donation to the cause. What do you get the couple that literally has everything, including a chateau in France where they can get married anytime they feel like? Better yet, take the $529 million that the tabloids are sure to offer for exclusive wedding pictures and donate that to help fight for gay marriage. Leading by example is what gay and lesbian Americans really need, but since they’ve failed at that, we’ll at least take their money.

Brian Moylan is a writer and pop culture junkie who lives in New York. His work has appeared in Gawker, VICE, New York magazine, and a few other safe-for-work publications. His boyfriend does not want to get married…yet. 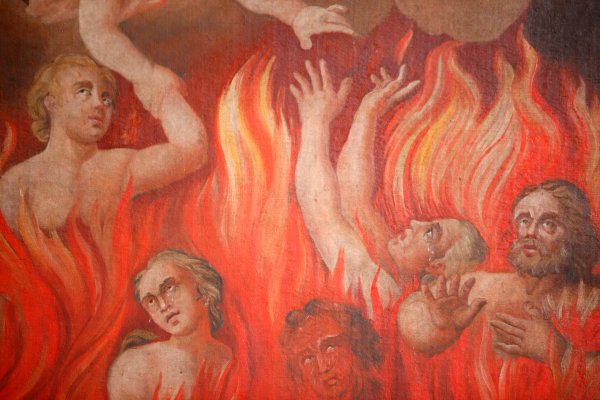 5 Reasons Christians Are Rejecting the Notion of Hell
Next Up: Editor's Pick