Demonstrators march down West Florissant during a peaceful march in reaction to the shooting of Michael Brown, near Ferguson, Mio., Aug. 18, 2014.
Lucas Jackson—Reuters
By Brandon Hill

Phobias are lethal. This summer’s series of prominent killings of unarmed Black men, Michael Brown being the most covered, have forced me to come to terms with my own fear: I am an arachnophobe.

A few nights ago, I noticed a dark spot in my periphery. Suddenly it twitched. My stomach dropped. The dark spot was a five-inch spider, looking as if it had muscle and bone. There was no possible way I could sleep soundly until the behemoth was neutralized. I scrambled to find a shoe, then swung it with all my might. With a clap of thunder, the big dark enemy was no more; flattened to a wall stencil. Relief.

Phobias are extreme aversions. They are embedded deep in our psyches, activated when we come face-to-face with the thing we fear. For me, spiders trigger overreactions. For others, it can be people.

Before there was Michael Brown, there was Eric Garner, a dark spot in the periphery of the NYPD—a trigger for their phobia. There was no possible way they could patrol confidently that day without assurance the behemoth was neutralized.

Garner’s 400-pound anatomy forms an object of American Negrophobia: the unjustified fear of black people. Studies show that Black people, particularly Black men, are the group most feared by White adults. Negrophobia fuels the triangular system of oppression that keeps people of color pinned into hapless ghettos between the pillars of militarized police, starved inner-city schools, and voracious prisons. And this summer there weren’t only Garner and Brown; there were John Crawford, and Ezell Ford, and many others who will not be eulogized in the media.

Even the most well-intentioned people sometimes have difficulty avoiding discourses that reinforce problematic notions of Black physicality. A few months ago, I got into a conversation with a mentor of mine, a Stanford administrator. This individual told a story of a visit to a penitentiary where there was a stellar performance of Shakespeare’s Othello by a cast of inmates. My mentor’s description of the lead, a brawny African-American male convict, will always fascinate me. In this person’s words, the thespian was a “large, beautiful, intimidating Black man.”

This stream of modifiers—large, beautiful, and intimidating—is normally reserved for majestic, predatory beasts like tigers, bears, or dragons. It describes something both appealing and appalling, but not typically a human. You can see classic buck and brute tropes echoed in various corners of modern popular culture. These types of perceptions of historically marginalized groups can, in the wrong circumstances, foment phobias—and dangerous overreactions.

But misperception is nothing new. The bestial depiction, and treatment, of Black people follows a linear history from the times of pickaninny children to the current United States president.

I hate to think this is what the police see when they approach any unarmed Black person—a predator that has escaped captivity and must be tranquilized before he or she wreaks havoc. And yet. An officer quelling Ferguson protests can be heard screaming on live television, “Bring it, all you f****** animals!” to the predominantly Black demonstrators.

Back to the spider once more: my perception of the fear and the ability of that spider to actually produce the threat I have mentally assigned it were completely disproportionate. It was just me spooking myself into fury. Phobic people hyperbolize a threat that is not actually present, and trip themselves into aggression. We as Americans must learn to see each other properly and not through the lens of phobia.

This is a plea to those officers who are unflinching in the gravest of dangers, whose courage is forged in the crucible of our nation’s worst emergencies, yet who lose all composure when facing the grimace of a Black man. The concept of diversity, like Eric Garner, is large, beautiful, and sometimes intimidating. America will only be America once we learn how to fully appreciate it, not fear it. One day, I hope, we won’t see our fellow humans as dark spots.

Brandon Hill is a junior at Stanford University, studying political science and African & African American Studies. Raised in Eden Prairie, Minnesota, he has interned for the White House and UNICEF.

Write to Brandon Hill at bhill1@stanford.edu. 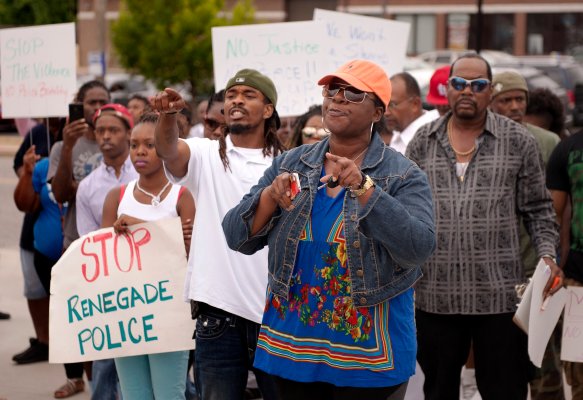 Twitter Users Ask What Photo Media Would Use #IfTheyGunnedMeDown
Next Up: Editor's Pick