Hey Brangelina, Not Everyone in the U.S. Can Get Married Yet

Hollywood power couple Brad Pitt and Angelina Jolie got married last weekend, which is great news for people who like to fantasize about celebrity weddings, and bad news for those still carrying a torch for #TeamJen. It’s also frustrating news for the LGBT activists who’d prefer their straight allies not backtrack in their commitment to the cause of marriage equality — something that’s still not available in all 50 states.

In 2006, Pitt told Esquire that he and Jolie would “consider tying the knot when everyone else in the country who wants to be married is legally able.” A few years later, he reaffirmed his position to Parade:

As marriage equality arrived in a few more states — like in New York in 2011 — Pitt made it clear he still wasn’t satisfied in a statement to People magazine:

Here’s the thing: that day has not yet come. Only a handful of states in the U.S. allow same-sex couples to get married, according to this map from LGBT rights organization Lambda Legal.

As laws have changed incrementally, though, some celebrity couples who had previously been hesitant about marrying went ahead with their plans. Veronica Mars actress Kristen Bell seemed to echo Pitt’s sentiments when she told The Advocate in 2012 that she was holding off on marrying Dax Shepard because she didn’t “feel appropriate taking advantage of a right” denied to her gay and lesbian friends. In other interviews, she clarified that she was talking about California specifically: “We’ve been very vocal about not wanting to be married in a state that doesn’t allow that right to all of its citizens,” she told Celebuzz. “We’ll wait until California gets on the right side of history.” (Bell eventually proposed to Shepard on Twitter after a Supreme Court ruling in June 2013 allowed same-sex marriage to resume in California.)

The reasons for Pitt and Jolie’s apparent reversal on marriage are less clear. The two — who, to be clear, aren’t under any obligation or mandtate to wait at all — might have changed because of the kids. Several weeks before making his statement about New York state, Pitt suggested to USA Today‘s weekend edition that his children were pushing for marriage and that his previous commitment to waiting was possibly wavering. “The kids ask about marriage,” he told the paper. “It’s meaning more and more to them. So it’s something we’ve got to look at.”

Or maybe they just got married to claim all the government protections and benefits marriage allows — the very things that have made marriage equality a goal among LGBT activists in the first place. 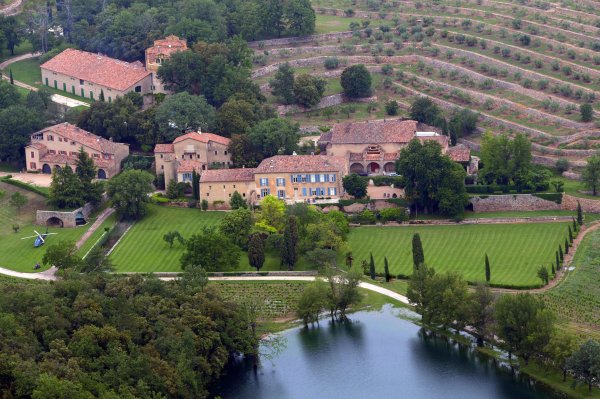 Here's the French Château Where Brad and Angelina Wed
Next Up: Editor's Pick