Friends Celebrates 20 Years With A Central Perk Pop Up Shop

No one told us life was going to be this way! One day you’re watching your new favorite TV show about a group of affable twentysomethings who live, love and host some memorable meals in some seriously valuable real estate in Manhattan, and the next thing you know, 20 years have passed.

Friends is about to celebrate the 20th anniversary of when Monica, Rachel, Phoebe, Ross, Chandler or Joey joined the primetime line-up — and to help mark the occasion, a replica of the friends’ favorite hangout, Central Perk, will pop up in Manhattan.

From September 17 to October 18, fans can pay homage to Friends while hanging around the Central Perk coffee bar (located at 199 Lafayette Street in Manhattan’s SoHo neighborhood), perhaps while sipping on a special Central Perk Roast from Eight O’Clock Coffee, who is sponsoring the shop in collaboration with Warner Bros.

To document fans’ trips down memory lane, Central Perk will be chock-full of selfie opportunities, including the actual orange couch from the show and the iconic Central Perk storefront. While there’s little chance that Monica, Rachel, Phoebe, Ross, Chandler or Joey will be hanging around (or working) at the shop, actor James Michael Taylor, who played grouchy waiter Gunther on the series will be on hand — not to serve, but to sip coffee alongside fans.

No trip to Central Perk would be complete without suffering through a set of Phoebe’s songs, so the shop will feature acts who are hopefully better than Phoebe, but will still sing at least one round of her sole hit, “Smelly Cat”:

This isn’t the first time there has been a Central Perk pop-up — back in 2009, there the coffee shop popped up in London to celebrate the 15th anniversary of Friends— but this is the only one in the States. So fans should either book a ticket to NYC now, or just drink coffee in the living room and watch Friends re-runs.

MORE: Zach Galifianakis to Star As a Clown in New FX Comedy Baskets 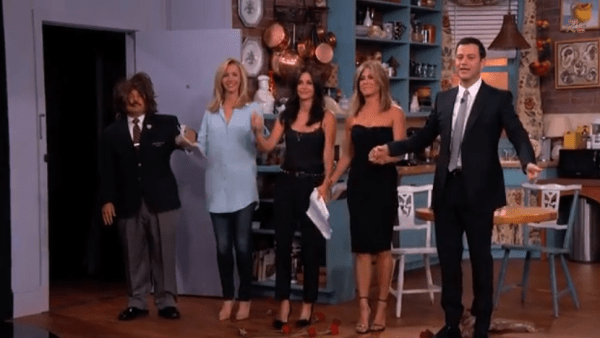