The frantic appeal to the Russian President came on Wednesday from a cramped and cluttered office in the city of Kostroma, about 200 miles northeast of Moscow, where the relatives of Russian prisoners of war had gathered to wait for news of their sons and husbands. Olga Pochtoeva, the mother of one of the Russian soldiers recently captured in Ukraine, stood before the camera, her eyes red from crying, and addressed Vladimir Putin directly. “I beg you in the name of Christ,” she said. “Give me back my child. Give him back alive.”

It was another blow to Putin’s position on the war in eastern Ukraine. The previous night, after a round of talks aimed at ending a conflict that has claimed more than 2,000 lives since April, Putin had again insisted that Russia was not a party to the conflict and had sent no soldiers to fight it. “This is not our business,” he told reporters after the talks in the capital of Belarus, having just finished his first meeting since June with Ukrainian President Petro Poroshenko. “It is a domestic matter of Ukraine itself,” he said.

But Putin’s persistent denials of Russian involvement have started to crack, eroded by a growing body of proof that Russian soldiers are in fact fighting and dying in eastern Ukraine. The evidence suggests a new level of Russian involvement in the war, not merely funneling weapons and volunteers across the border to the pro-Russian separatists in Ukraine, but sending regular Russian ground forces on missions into Ukrainian territory. The inevitable result of that escalation has been a growing Russian casualty count, and the funerals and panicked relatives of Russian soldiers have been hard to sweep under the rug. Soon they are likely to force Putin either to come clean and admit his country’s intervention in Ukraine, or to face the growing public resentment over his denials.

The first crack in Russia’s claim of non-involvement came on Monday morning, when the Ukrainian security services released images of nine Russian paratroopers who had been captured on the Ukrainian side of the border. In the video statement of Pochtoeva’s son, Yegor Pochtoev, he appeals to his parents directly. “Mom, dad, everything is fine. I have enough to eat and drink,” he says. “But the Russian Ministry of Defense is denying that we are their servicemen, that we have come from Russia.” He asks his parents to help prove that they are Russian soldiers.

The morning after the videos were released, Pochtoeva and the other relatives of the captured soldiers began placing frantic calls to the local branch of the Committee for Soldiers’ Mothers, a civil society organization that defends the rights of military servicemen in Russia. Lyudmila Khokhlova, the Committee’s chairwoman in the region of Kostroma, arranged for all the relatives to gather that afternoon at the military base where the captured soldiers had served. “Everyone in the hall was screaming. They had a lot to get off their chests,” she tells TIME of the confrontation between the relatives and the officers at the base.

When the deputy commander of the base arrived, he told the families that the soldiers in the videos had indeed been taken prisoner in Ukraine, Khokhlova says. But they were apparently the lucky ones. “They told us that two others from their group had been killed and some wounded,” she says, recounting the words of the officer who met with the families. “The wounded were taken back across the border to a hospital in [the Russian city of] Rostov.”

The Russian Defense Ministry, in a curt statement on the incident on Tuesday, said nothing about Russian soldiers being killed or wounded in Ukraine, but admitted that a group of paratroopers had been captured on the wrong side of the border. Asked about their fate on Tuesday night, Putin suggested that they had simply gotten lost and veered into Ukraine by accident. “What I heard is that they were patrolling the border and might have ended up on Ukrainian territory,” Putin said with a shrug. He expressed hope that “there wouldn’t be any problem” with getting them back home, but offered no promises or plans to do so.

Nor did he make any mention of the Russian servicemen who have apparently been coming home in bags. Those incidents have become so frequent that even the Kremlin’s own human rights council, an oversight body that operates with a degree of independence, appealed to Russia’s military authorities on Tuesday to investigate the mysterious deaths of nine Russian servicemen “not far from the Rostov region,” which borders Ukraine. All of them were contractors from the 18th motorized infantry brigade, mostly natives of the region of Dagestan, and were killed in unexplained circumstances in early August, according to the Kremlin rights council. One of the council members who authored that appeal, Ella Polyakova, later told Russian media that the military hospitals along Russia’s border with Ukraine had for some reason filled up with wounded soldiers. “A lot of our boys have been killed in recent days,” she told Russia’s only independent news channel, TV Rain. (Polyakova did not respond to TIME’s requests for further comment.)

The clearest evidence to support her claim emerged on Monday from the region of Pskov, where the bodies of several Russian paratroopers were buried on Monday. Lev Shlosberg, a lawmaker in the regional parliament, tells TIME that the funerals were held in total secret and that family members had been warned not to discuss the deaths with anyone. “What’s the goal? The goal is to prevent society from learning the scale of the losses and considering the costs of this war,” Shlosberg says, claiming that the soldiers had been killed in battle in eastern Ukraine. “The state is trying to hide the involvement of our soldiers in these military actions, because they are not legal or constitutional. There was no official order from the commander in chief or the defense minister to participate in this conflict.”

Despite the reticence of Russian officials, numerous reports of Russian casualties have begun to emerge. TV Rain, which narrowly avoided the state’s attempt to take it off the air earlier this year, has been airing marathon coverage of the funerals in Pskov and the fates of the paratroopers buried there. When a group of Russian reporters attempted to film the graves at a provincial cemetery near Pskov, several men in civilian clothes chased down the journalists’ car and attacked it on Wednesday, puncturing its the tires and attempting to break out the windows. (Footage of the incident appeared on the website of TV Rain, and elicited a rebuke from the press freedom watchdog at the Organization for Security and Cooperation in Europe.)

The Russian state-run media have meanwhile been avoiding the reports of killed Russian servicemen almost entirely. The news that nine Russian soldiers had been captured in Ukraine warranted no more than three paragraphs on Tuesday on the website of the Kremlin’s main broadcaster, Vesti, which echoed Putin’s assertion the following day that the soldiers had simply made a wrong turn into Ukraine while patrolling the border.

“This sounds to me like a joke,” says Lidiya Sviridova, the head of the Committee of Soldiers’ Mothers in the region of Saratov. During a press conference on Tuesday in the regional capital, she called on the parents of all Russian soldiers to find out whether their sons have been sent to Ukraine and, if so, to publicly appeal to the state for answers. The families of numerous servicemen have gotten in touch with her asking for help in finding missing Russian soldiers, she tells TIME by phone from Saratov on Wednesday. “They could not all have gotten lost.”

On Wednesday evening, with the reports piling up of Russian military casualties Ukraine, Putin’s spokesman finally responded, at least to the claims of a secret funeral in Pskov. “The relevant agencies are certainly checking this information,” Dmitri Peskov told the Interfax news agency. But it’s not clear how long such answers can restrain the public’s concern. Though the Kremlin controls nearly all mass media in Russia, it has little sway over the online press, where the reports of Russian soldiers dying in Ukraine have become the hottest topic of debate. Civil society groups like the Committee for Soldiers’ Mothers are also refusing to keep mum. “The silence in the official media is deafening,” says Shlosberg, the lawmaker in Pskov. “Everybody here knows what’s going on. Everybody is talking about it.” Everybody, it seems, except for Putin. 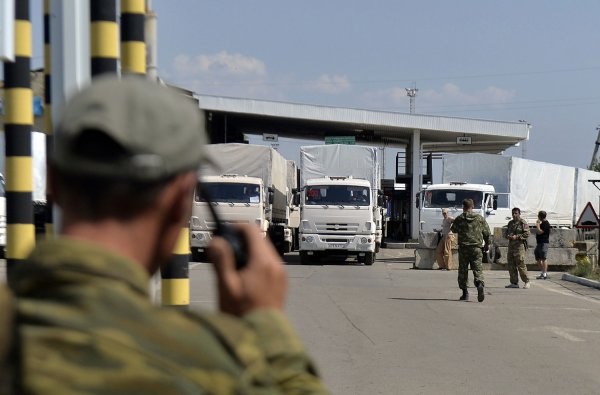 Trucks Return to Russia After Sparking Panic in the West
Next Up: Editor's Pick