Sharing my egotistical thoughts in print each week does not mean that I don’t have even more egotistical, secret thoughts. One of them is that I cannot believe no one has ever asked me to play myself. Yes, I understand that if a producer hires me to be in a show or movie, the audience will be taken out of the story, wondering how the producer was able to get me, why a journalist looks better than Hollywood actors, whether my wife was cool with me doing such a long, involved love scene and whether Brad Pitt was O.K. with his wife doing said scene.

Finally, though, an offer came to my agent, who I hope also has other clients. A Friday-night ABC sitcom called The Neighbors wanted me to play myself as a guest at an intellectual salon organized by a child alien named Dick Butkus. The show has been on the air for two seasons, despite having a strong following only among child aliens and Dick Butkus. The offer focused heavily on the terms prime time and ABC and left off the child-alien part.

Shortly after I negotiated my contract, which consisted of me being surprised they were paying me, I got a call from the costume designer. She asked me what “brands of denim” I wear and whether I had any “signature items.” Amazingly, I answered those questions at length, after figuring out that “denim” meant jeans and that “signature items” didn’t mean signed jerseys.

I’ve always wondered whether the world sees me as a narcissistic punk, a fratty pig or a phony who got his job solely on the basis of his looks. Then I got the script. It turns out that the world sees me exactly how everyone pegged me in high school. I’m a nerd.

In the script, I appear on the genius alien boy’s web talk show with MSNBC anchor Lawrence O’Donnell and Moby. My main problem with this scenario was Moby. I know he’s a descendant of Herman Melville and likes tea, but his academic credentials end there. And now that I knew the world thinks of me as a brain, Moby risked hurting my brand. Luckily, when Moby found out that the call time was 6 a.m., he canceled, since Moby, who apparently thinks of himself as a rock star instead of as Moby, doesn’t go anywhere until 10 a.m. To my delight, he was replaced by Bill Nye the Science Guy, who totally reinforces my brand. Now I’d be demonstrating that I could make fun of my stiff, brainy self instead of just demonstrating that I will appear on any show that asks.

When my 4-year-old son Laszlo heard me rehearsing my lines, he asked why I was going to be on TV. “Do you know what famous means?” I asked. I explained to him that people I didn’t know knew who I was, whereas only people who had met his mom knew her, and most of them probably forgot her because she’s not famous.

The morning of the shoot, I walked into a trailer with my name on it, put on some of my now signature items such as “shirt” and “pants” and sat at the kitchen table on the set. Then Jami Gertz, who plays Neighbor of Alien Child, walked in, shocked to see her three biggest crushes in the house. I imagined what 16-year-old me would think of the fact that Gertz, who was huge at that time, was lusting after me. Then I wondered what he would think about the fact that she was lusting after me as a joke because I’m a nerd. It turns out he wouldn’t care at all about why she was doing it.

On Jami Gertz’s fifth take slowly and suggestively saying my name in a very convincing way, she called me “Joel Klein.” That’s when I realized that Jami Gertz is an actress who was pretending to know who I am. I wondered if all the women I’ve slept with were also acting, pretending they were with the former New York City school chancellor.

Shortly thereafter I also found out that I was not the producers’ first choice. In fact, I learned from Kristin Newman, one of the show’s writers and a co–executive producer, that they contacted me only after being rejected by Neil deGrasse Tyson, Arianna Huffington, Jonathan Franzen, Reza Aslan, Richard Dawkins, Cornel West, Ira Glass, David Sedaris, Rachel Maddow, Anderson Cooper, Malcolm Gladwell, Ben Stein and Al Franken. And finding out that the Mohawk guy who helped build the Mars Rover no longer had a Mohawk. In desperation, they called me because Kristin had my email. “Most of the people I know write fart and penis jokes,” she said. “You are the most legitimate writer I know because you write fart and penis jokes for the newsmagazine I read in the bathroom.” 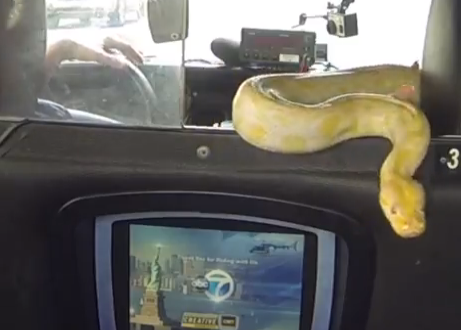 Watch New Yorkers Freak Out When a Taxi Driver Pranks Them With a Live Snake
Next Up: Editor's Pick