5 Best Works at the Whitney Biennial

Next to being a studio assistant in one of Damien Hirst’s painting factories, filling in his endless dots, what’s the most thankless job in the art world? Easy answer: curating the Whitney Biennial, the periodic survey of (mostly) recent, (mostly) American work at the Whitney Museum of American Art in New York City. It’s the show everybody loves to hate, the one that every two years provides a new opportunity to vent, grimace or just shrug and go look for lunch.

The 2014 edition, which runs through May 25, is the last that will be held in the Whitney’s longtime Marcel Breuer–designed stronghold before the museum decamps to new quarters by Renzo Piano in downtown Manhattan. Maybe to disperse the burden placed on any single Biennial organizer, this year the Whitney tapped three, giving each his or her own floor. Michelle Grabner is a painter and conceptual artist from Chicago. Stuart Comer is the chief curator of media and performance art at New York’s Museum of Modern Art. And Anthony Elms is an associate curator at the Institute of Contemporary Art at the University of Pennsylvania.

Even with over 100 artists, their Biennial feels thin, maybe because apart from Grabner’s floor, so much of it consists of wan conceptual projects, lengthy wall texts meant to explain work barely worth glancing at and vitrines full of documents and notebooks. Did I mention the entire gallery devoted to the critical theory journal and publisher Semiotext(e)? It’s like some forbidding French notion of Comic-Con. Visitors trudge through whole stretches of this show looking for something to look at. There are in fact a few. These are five:

Sillman, from Brooklyn, is a nearly 60-year-old painter who finally got a bracing retrospective last fall at the Institute of Contemporary Art in Boston. Her work is marked by a precarious balance of off-kilter forms, with nods to Philip Guston’s cartooning, the biomorphism of Arshile Gorky and Roberto Matta and the palette of Matisse, among others, all deployed with the comic aplomb of somebody not afraid to introduce the occasional cartoon thought bubble into her work. Don’t suppose for a minute that’s the only thought that goes into it.

Adkins, who was 60 when he died in February, was a Brooklyn-based African-American artist and saxophone player who blended music and objects of his own creation into category-confounding works. For the series he made under the collective title Aviarium, he strung cymbals onto aluminum rods to make three-dimensional silhouettes corresponding to the differing wave vectors produced by the songs of various bird species. The rods are fixed to a wall so that each reads horizontally, as the vector paths would on a scope screen. The taut result is a palpable and dazzling transformation of sound into substance.

There are wonders of the briny deep in this darkly absorbing 87-minute video, but don’t come expecting Jacques Cousteau. Working with more of a debt to films like Humain, Trop Humain–Louis Malle’s hypnotic 1973 documentary that bore witness to the repetitive tasks of assembly-line workers–the filmmakers transmute the days and nights of a New England commercial fishing boat into a roaring group portrait of man, machine and nature. There’s no narration, no music and a minimum of spoken words, the better to allow for a nerve-jangling soundtrack of crashing seas, rumbling engines and shrieking winches. You’ll never look at seafood the same way again.

Drucker and Ernst, a Los Angeles couple in their early 30s, are on a journey into each other’s territory. Both are transsexuals in transition–Drucker from male to female, Ernst from female to male. For the past five years, while collaborating on projects like She Gone Rogue, a film also in the Biennial, they’ve been making searching photographs of themselves and each other, scenes along the road of an extraordinary trip. Sometimes they offer themselves candidly; sometimes they perform their emerging new roles for the camera–which in the end amounts to another kind of candor, the kind that says, Identity is the mask I wear today. A documentary from the inside looking out, the Relationship series is art that doesn’t live up to expectations, for the good reason that there are no expectations you should bring to it.

At least since the time of Auguste Rodin, sculptors have been asking themselves how much pressure they can exert on the human form without squeezing out all recognizable humanity. One answer is Allen’s Untitled, an ectoplasmic flourish of white marble at roughly human scale. Born in 1970, Allen, who lives in Joshua Tree, Calif., may not even have intended to suggest the body when he first cut into the stone. A self-taught artist, he likes to talk about how he often arrives at a form only after unforeseen developments in his materials–a crack, a stain–force him to take unanticipated detours. But the body is where he arrived this time, complete with a heavy outstretched “arm” that provides both a basic human gesture and the drama of that eternal question with heavy sculpture: Will it tip? Art doesn’t get more contemporary than this, a work carved from one of the most ancient of artist’s materials but looks like something made on a 3-D printer. 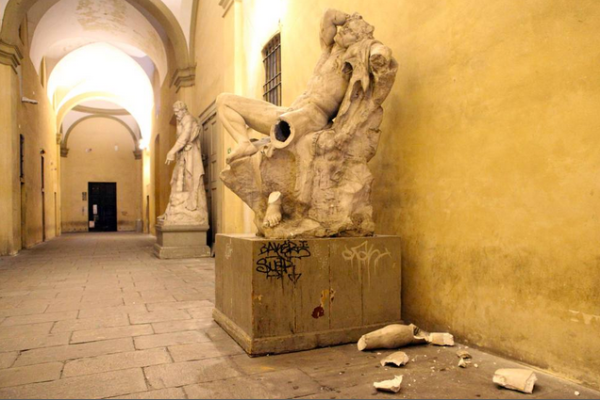