Palestinians in Gaza City celebrate in the streets after a deal had been reached between Hamas and Israel over a long-term end to seven weeks of fighting in the Gaza Strip on Aug. 26, 2014
Momen Faiz—NurPhoto/Corbis
By Ilene Prusher / Jerusalem

Palestinian President Mahmoud Abbas announced Tuesday that Israel and various Palestinian militant factions including Hamas and Islamic Jihad had reached a cease-fire deal to end seven weeks of devastating war, and to postpone negotiations over several remaining issues for one month.

The news follows weeks of intense efforts on the part of the Egyptian government to broker a truce between the sides, both of whom were keen to emerge looking victorious, or at least successful, from a bruising war that resulted in the death of nearly 2,200 Palestinians and 70 Israelis.

Israeli government spokesperson Mark Regev told the BBC that the cease-fire would meet Israel’s primary goals of keeping its citizens safe. The deal, he said, “commits Hamas to ending all hostile activity against Israel from Gaza. Now if that in fact does happen, and we hope it does, that is, for us, victory.”

Abbas’ role in announcing the deal from his Ramallah headquarters in the West Bank was evidence of the more prominent role that Egyptian, Israeli and other officials have sought in Gaza for the Palestinian President, whose Fatah party and security forces were ousted from the coastal strip in a Hamas coup in 2007.

In an evening speech making the deal official, Abbas said that he would soon present a detailed plan aimed at establishing a Palestinian state along the 1967 lines, a reference to Gaza, the West Bank and East Jerusalem, territories Israel occupied in the Six-Day War. He also indicated that he would not return to another round of negotiations with Israel amid what seems like such a discouraging prognosis for progress; the last round of talks ended in failure in April.

“The question now is, What’s next?” Abbas said. “Gaza suffered three wars and are we expecting another one? We will consult friends and the international community, and we can’t continue with cloudy negotiations.”

What’s in the Deal
The deal calls for an “open-ended” cease-fire and an Israeli agreement to ease its strict closure policy on Gaza, which Palestinians consider a siege. In theory, this means Israel should ease access at five crossings into Gaza that it controls, opening them up for a better flow of commercial goods and humanitarian needs, and most importantly, for building materials at the Kerem Shalom Crossing.

This latter aspect, according to a Palestinian source close to Hamas, has held up a deal in recent weeks as Hamas thought it necessary to hold out for the free flow of materials such as cement and steel as part of the reconstruction of Gaza. Also included in the deal is an Israeli agreement to allow Gazan fisherman to fish in waters up to 12 nautical miles off the coast by the end of the year — more than doubling the distance they were able to travel offshore in recent years, leading to overfishing.

What Hamas did not get, but had demanded throughout the past month, are three other things that the sides have agreed to postpone discussing for one month. These include the creation of a Gaza seaport, an airport and the release of approximately 50 Hamas activists who were rearrested by Israel in June. After having let them go in the Gilad Shalit prisoner exchange in October 2011, Israeli forces arrested them in West Bank raids following the kidnap-murder of three Israeli teenagers in mid-June. A senior Hamas official last week took responsibility for that attack.

Also postponed for a month is the demand by Hamas for Egypt to open the border crossing at Rafah. Egypt said it would work that out in a separate, bilateral agreement, with sources suggesting that that Egyptian President Abdul Fattah al-Sisi wanted to take a wait-and-see approach before agreeing to ease Egypt’s own closure of the Hamas-run territory. Abbas’ Palestinian Authority forces are expected to take over responsibility for administering Gaza’s borders from Hamas, Reuters reports.

The agreement seems to lack exact details as to what precisely it would mean for Israel to “ease” its blockade of Gaza, leaving room for disagreements as in past years. Moreover, the deal largely mirrored the November 2012 cease-fire agreement that ended a week of war known as Operation Pillar of Defense. Exactly how “open-ended” this cease-fire ends up being thus remains to be seen.

Hamas Declares Victory
Hamas proclaimed itself victorious on Tuesday night, as details of the deal leaked out. Gazans gathered in several places throughout the strip and shot celebratory gunfire into the air.

“We are here today to declare the victory of the resistance, the victory of Gaza, with the help of God, and the steadfastness of our people and the noble resistance,” Hamas spokesman Sami Abu Zuhri said at a news conference at Gaza’s Shifa Hospital.

The deal fulfilled what the Palestinian group had hoped for during the weeks of negotiations, said Gershon Baskin, an Israeli academic who has acted as a go-between Israel and Hamas on several occasions, including in the lead-up to the Shalit prisoner exchange deal almost three years ago. “Hamas has been ready for an agreement for two weeks, and has made it clear its achievements would not be military but political. What was important to them was to get building materials into Gaza,” he said.

Hamas leader Mahmoud al-Zahar, a senior member of the Hamas political wing who has not been seen in public in some time, was one of several top Hamas officials to speak to the crowd of thousands gathered in Gaza City’s Rimal neighborhood Tuesday.

“We’re going to build our port and our airport, and if they attack the port, they attack the port. But anyone who attacks the airport will have their airport attacked again,” al-Zahar said, according to an Agence France-Presse report, in a reference to the numerous rockets launched at Israel’s Ben Gurion International airport. Though none of these succeeded, a Hamas rocket that targeted a town near the airstrip caused the Federal Aviation Administration to suspend the landing of several U.S. airlines there for several days in July.

Netanyahu Faces Hard Sell
Israel seems less in the mood for celebrating. Prime Minister Benjamin Netanyahu, who informed his cabinet of the cease-fire deal Tuesday evening, has a more complicated job of selling the war’s achievements to Israelis. While the vast majority of Israelis believed he was justified in going to war, according to polls, not all of them are ready to end Operation Protective Edge with Hamas seemingly undeterred — and many are fearful that a cease-fire is simply a time-out until the next round. Whereas 82% of Israelis supported Netanyahu in mid-July, when he first sent in ground troops, a new poll showed his approval rating sunk to 32%.

Itamar Shimoni, the mayor of Ashkelon, one of the cities hardest hit by the rocket fire, called the deal a “surrender to terrorism” and added: “We wanted to see Hamas defeated and begging for its life, but instead we’re seeing Israel running to the negotiation table every opportunity that presents itself.”

The upper echelons of Netanyahu’s team and senior Israel Defense Forces officials, however, will present it much differently. “The Israeli spin will be that Hamas shot most of their rockets and that won’t easily be replenished, and that most of the tunnels were destroyed and can’t be rebuilt,” Baskin tells TIME. “The big question is whether the regional political process will restart, as it should.” 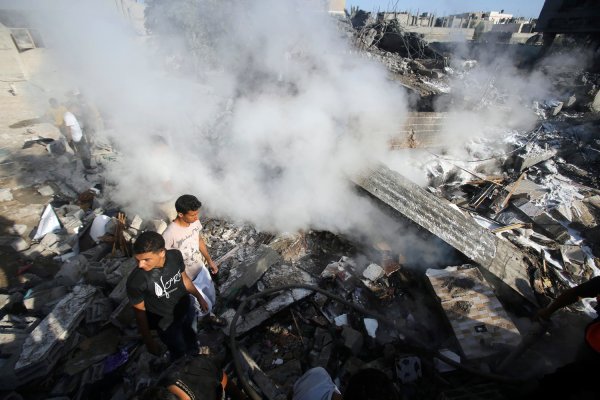 Hopes of Prolonged Truce Fade as Gaza Conflict Reignites
Next Up: Editor's Pick