Ferguson Wrestles With What to Do Next

Michael Brown Sr., center, yells out as his son's casket is lowered into the ground at St. Peter's Cemetery in St. Louis on Aug. 25, 2014
Richard Perry—Pool/Reuters
By Alex Altman

The funeral was choreographed to the smallest detail, from the celebrities sprinkled through the church to the Cardinals cap laid atop the black-and-gold casket. A massive crowd filed past the television cameras and into the jam-packed sanctuary or the overflow rooms live-streaming the service. The ceremony was billed as a celebration of Brown’s life, which ended Aug. 9 in a hail of bullets fired by a white policeman, and the crowd heard upbeat gospel music, stirring sermons and a eulogy from the Rev. Al Sharpton. But it was also an opportunity to send a message to his mourners. “We are required,” Sharpton told them in his peroration, “to leave here today and change things.”

For the residents of Ferguson, Mo., Brown’s funeral on Monday closed one chapter and opened a new period of uncertainty. The worst of the violence appears over, and the protests are beginning to subside. Soon the television cameras will get packed up, leaving a town that has become the latest shorthand for America’s racial divide to figure out how to translate the energy, intensity and anger of the past two weeks into concrete change.

The problem is that nobody is quite sure how to do it — or what that change would even look like. The shooting of an unarmed, 18-year-old black man at the hands of a white Ferguson policeman opened all sorts of wounds that have festered for generations. Of the thousands who have tromped up and down West Florissant Avenue since Brown’s death, there are nearly as many diagnoses about what Ferguson needs now.

To some, the answer is erasing the pattern of improper police behavior that has plagued this St. Louis suburb. To others, it is addressing income inequality or struggling schools. Still more cite the need to regain lost jobs, or repair the ruptured trust between the community and the people sworn to protect it. Then there is the glaring lack of African-American political representation: Ferguson is a city that is two-thirds black, run by a white mayor and nearly all-white city council.

“This is Jim Crow country,” says Garrett Duncan, a professor of education and African-American studies at Washington University in St. Louis. “You still have a predominantly white and affluent population voting for who runs North County,” the collection of townships like Ferguson north of St. Louis.

Ferguson’s protesters are united on one point: they want justice, in the form of an indictment for Darren Wilson, the police officer who shot Brown at least six times just after noon on Aug. 9. (A new audio recording, provided to CNN by an unidentified resident, who alleges he inadvertently captured the incident on tape, purports to show that Brown was killed in two distinct bursts of gunfire separated by a pause. CNN says it cannot authenticate the tape.) But an indictment will be slow, if it comes at all. Robert McCulloch, the lead prosecuting attorney in the case, has estimated he won’t finish presenting evidence to a grand jury until about mid-October. Issues can flare and fade in a blink. If the courtroom lag diverts attention from the systemic problems that led to Brown’s shooting, the community could lose the momentum it has gathered.

To Larry Jones, bishop of the Greater Grace Church in Ferguson, the solution is to reach out to a generation of young, black men who don’t believe the system is geared to represent them. Part of that, he says, is to form mentorship programs that help blacks prepare to enter the workforce and to cope with episodes of police targeting. But another part is improving civic participation. “We have forgotten the power we’ve been given to go to the polls and cast our vote,” says Jones. “It’s those local elections that really affect our lives. We do have a voice, and we need to use it.”

In 2013 municipal elections, just 6% of African Americans turned out to vote. The figures are so low, in part, because the elections were held in the spring of an off-year. But that doesn’t explain the racial gap: whites, who comprise just one-third of the city’s population, were three times more likely to vote. A number of groups are trying to improve African-American participation. The organization HealSTL, launched in the wake of the shooting, leased office space in town as part of its bid to “turn a moment into a movement.” Other organizations have also erected voter-registration booths alongside the protests.

Another challenge will be fixing the issues with local police, which range from widespread reports of bias to the heavy-handed crackdown on the protests. Chris Koster, Missouri’s attorney general, has announced workshops this autumn designed to diversify the state’s urban police forces. (Ferguson, whose force is 94% white, is hardly the only township with an unrepresentative police department.) Democratic Congressmen Emanuel Cleaver and William Lacy Clay, both of Missouri, met last week with U.S. Defense Secretary Chuck Hagel to air their concerns about the “militarization” of area police, who responded to the protests with tear gas, rubber bullets and armored tanks. “If there is any good that can come out of the tragedy in Ferguson,” they wrote in a statement on the meeting, “our hope is that this effort will spur a national discussion about how to achieve a fundamental shift in local law enforcement, away from military-style responses, and towards a more community-based policy.”

Other residents hope that the exhale following the funeral will allow them to rebuild the city’s reputation. Ferguson has become a byword for racial strife and civic unrest, but it is more complex than a single stretch of heavily photographed road. Other sections of town bear the ubiquitous signs of urban reinvention: a downtown strip dotted with a wine bar and refurbished loft apartments, a farmers’ market, community gardens. In 2010, a 30-person delegation even traveled to Kansas City, Mo., to compete for an All-America City Award, for which the city was a finalist.

“For the most part, we get along,” says Brian Fletcher, a former Ferguson mayor who is one of the founders of a group called I Love Ferguson. The committee has passed out more than 8,000 signs bearing that credo, which dot leafy yards in the more affluent neighborhoods and line some of the city’s streets. It hopes to raise money to repay the businesses that suffered in the looting, and maybe even enough to incentivize others to move in. “The image that we’ve received is a city in chaos. We don’t ignore the fact that there’s racial tension and segregation,” says Fletcher, who is white. “We have chosen to stay here. We’re not leaving. It is an amazing community.”

The community has done some amazing things since Brown’s death, from the volunteer peacekeepers who soothed tensions between protesters and police to the residents who showed up each day with crates of bottled water and trays of food, paid for out of their own pockets. Now the challenge, as Sharpton told the mourners at the funeral, is to “turn the chants into change.” But marching orders are much more easily given from the pulpit than carried out on the street. It is up to Ferguson to figure out whether it will be known for a shooting or the healing that followed. “How we responded to the tragedy,” says Fletcher, “will become the real legacy.” 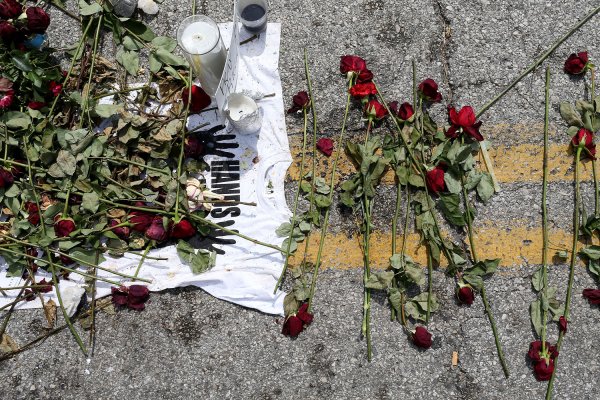