Knees Need a Defender: There's No Excuse for Leaning Back on an Airplane

Nobody over six feet tall is surprised that a couple of passengers got into a fight on a United flight from Newark to Denver over the use of a gadget called Knee Defender — two small, wedge-like devices that prevent the seat in front of you from reclining. The passenger using the device, a guy seated in a middle row, refused to remove it when the woman seated in front of him tried to recline. Words were exchanged; then a cup of water was hurled aft. The flight was diverted to Chicago, and the two were removed.

Me, I’m with Knee Defender guy.

I don’t travel with a Knee Defender, but I do travel with knees. Just being an airline passengers makes everyone cranky to begin with. Being 6 ft. 2 in. and long of leg, I’m in a near rage by the time I wedge myself into a coach seat. And now you want to jam your chair back into my knees for four hours? Go fly a kite. It’s an airline seat, not a lounge chair. You want comfort, buy a business class seat. What’s surprising is that there haven’t been more fights over Knee Defender. Or perhaps these incidents haven’t been reported. I’ve gotten into it a few times with people in front of me who insist that the space over my knees is theirs, as if they have some kind of air rights. And I’m sure I will again.

United says it has a no Knee Defender policy, although the device is allowable on other carriers. My own knee defense is this: As soon as the seatbelt sign goes off and people are free to annoy me, I wedge my knees against the seat in front of me. Any attempted move back is met with resistance. (Very good exercise, too.) At first, the person in front thinks there’s something wrong with his chair and tries again, meeting like resistance. Then there’s that backward glance, and the dirty look. I smile and say: “Sorry, those are my knees. And I’m not moving them.” Secretly I am saying, “If you try to move that seat back again I’m going over the top of your chair and strangling you.” Did I mention that flying is infuriating?

This has led to some very unfriendly exchanges on the friendly skies of United and elsewhere. And should my adversary, during an unguarded moment, manage to intrude into my space, there’s always the opportunity to resort to 8-year-old mode, accidentally kicking the chair every once in a while. If I’m not going to be comfortable, you’re not.

Yes, it’s not the most civil behavior, but United and other airlines brought this about by treating us like cargo. Consider the situation on Flight 1462. United runs 737s, among the smallest in the Boeing fleet, out of Newark to distant places. It’s four hours to Denver from Newark. The coach seats are 17.3 inches wide. The pitch is 31 inches in Economy and 34 inches in the so-called Economy Plus, where the dueling pair was sitting. Economy Plus used to be called by another name, Economy, until the carriers started adding rows and squeezing the space. This fight started because the guy was trying to work on his laptop. You can’t use a laptop when the seat in front of you is in your lap. And it’s only getting worse when you realize that the proportion of flights longer than two hours that now use commuter jets is growing.

Personally, my policy is to not recline, even if the seat does. I’m trying to respect the space of the passenger behind me. So please respect mine, or be prepared for a bumpy ride. 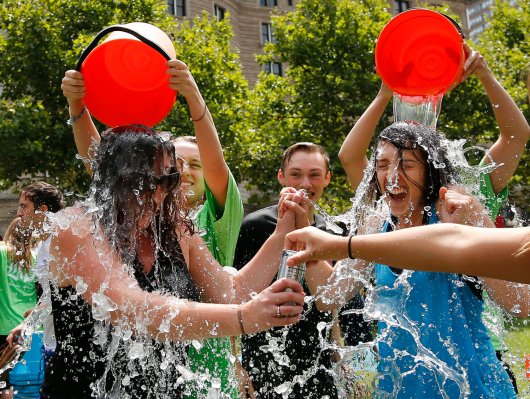 I Figured Out Why I Hate the Ice Bucket Challenge
Next Up: Editor's Pick