An interesting new study suggests that people might be able to predict how well a couple will adjust to being new parents by the way they play with dolls together.

Being parents often throws otherwise seemingly happy couples for a loop. (See: Jon Hamm and Kristen Wiig in Friends With Kids.) The stresses of having to monitor a new human 24/7, the triangulation of the relationship and the differences in parenting styles can make home life much more of a hard slog.

But it can be hard to predict what stresses will surface within couples before the child is actually born. So researchers at the Ohio State University videotaped almost 200 dual-earner couples playing with a “doll” — actually pajamas filled with 7 lb. of rice and a green fabric head attached — that they were told represented the child they were about to have. Nine months or so later, after the child was born, they videotaped the couples interacting with their actual baby and compared the two.

They found that the way couples interacted with each other around their baby — known as co-parenting — looked a lot like the way the couples interacted with each other around the doll. Spouses who said encouraging things to each other and cooperated as they interacted with the doll were also observed doing so with their actual child. Spouses who said things like, “You’re not going to hold the real baby like that are you?”, were critical after the real child was born. Couples who shared time with the doll in the study were similarly sharing responsibility for the real baby.

One of the authors of the study, which appeared in the August 2014 issue of the Journal of Family Psychology, said she was surprised by how striking the similarities were. “Even though I believe that the co-parenting relationship begins to develop prior to a child’s birth, I had to see it for myself to be convinced,” said Sarah Schoppe-Sullivan, a professor of human sciences at the Ohio State University. “It still amazes me that five minutes of play with a doll can predict co-parenting behavior with the real infant one year later.”

The doll-playing experiment was developed in Switzerland and has a fancy name — Lausanne Trilogue Play — but has rarely been used to study parenting in the U.S. “I think it really provides a unique opportunity to watch families develop from the earliest stages,” Schoppe-Sullivan said.

Parents who participated in the study tended to be a little better educated — and not weirded out by pretending rice-filled pajamas were babies — so the study was not nationally representative. But interestingly, the authors found that the inability to co-parent was not an outcome of being unhappily married. As part of the study, each couple filled out a questionnaire about their marital satisfaction. And the researchers also watched couples interacting without babies, or baby-like objects. “The co-parenting and couple relationships are not the same,” Schoppe-Sullivan said.

The researchers suggested that early intervention for couples with co-parenting issues may make for a smoother transition to parenthood and head off some family fracturing.

Correction: The original version of this story misstated the name of a movie with Jon Hamm and Kristen Wiig. 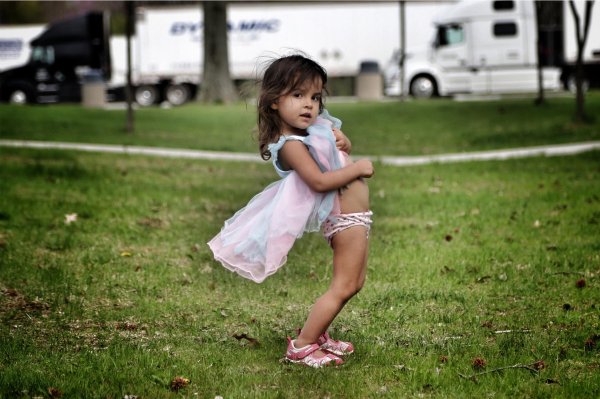