A man looks at the Burning Man effigy as it is prepared for the Burning Man Festival at Black Rock City in Nevada on Aug. 29, 2000.
Hector Mata—AFP/Getty Images
By Laura Stampler

Hippies and tech moguls alike will finally be able to get into Burning Man Tuesday after rain delayed the festival’s opening.

While Burning Man’s official Twitter had warned attempted revelers that cops were turning away cars Monday due to inclement weather, it announced that the festival’s Reno gates would reopen Tuesday at 6 a.m. local time.

Hundreds of stranded travelers took refuge in casinos or the local Wal-Mart parking lot, undeterred by the damp start to the desert event. “It’s the best festival in the world,” Jeff Cross told the AP Monday night when he was unloading provisions from his RV parked outside of Wal-Mart. “And there’s no cellphones, no internet, no money or corporate sponsors.”

Although that’s not the case for all Burning Man goers. Nick Bilton at the New York Times recently reported on the growing trend of a Silicon Valley elite infiltrating the egalitarian, counter-culture scene, in air-conditioned and wifi-equipped RVs.

The rain didn’t extinguish the Burning Man spirit for waylaid travelers camping at Pyramid Lake, the Reno Gazette-Journal reports. Dozens had to be told by local rangers that they had to keep their clothes on as they waited. “How can you not know that it is not OK to be naked in public?” one ranger said.

Such behavior is acceptable at Burning Man, which will run through Sept. 1. 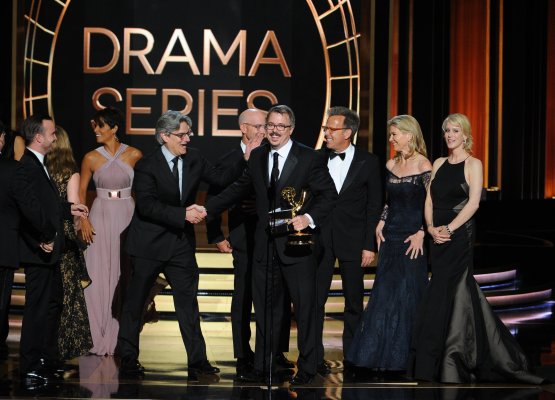 Breaking Bad Ends Its Emmy Run on a High Note
Next Up: Editor's Pick