Scotland's Independence Movement Gets a Boost From the Final TV Debate

Alex Salmond, First Minister of Scotland and Alistair Darling, chairman of Better Together, take part in a live television debate by the BBC in the Kelvingrove Art Galleries on Aug. 25, 2014 in Glasgow, Scotland.
Jeff J Mitchell—Getty Images
By Catherine Mayer

How might an independent Scotland differ from the country that is currently part of the United Kingdom? When two of Scotland’s highest profile politicians—First Minister of Scotland Alex Salmond of the Scottish National Party and Britain’s former Chancellor of the Exchequer Alistair Darling of the Labour Party—faced off against each other on Aug. 5 in the first of two debates ahead of the Sept. 18 referendum, only viewers north of the England-Scotland border reliably got to hear their answers to this question. The debate was broadcast on TV in Scotland only while a live feed on the website of Scottish broadcaster STV seized up under the weight of would-be viewers elsewhere in the U.K.

Last night’s rematch, by contrast, could be viewed without technical hitches on televisions and computer screens throughout Britain and Northern Ireland because it was broadcast by the British Broadcasting Corporation (BBC), which serves the whole of the U.K. The BBC is one of many institutions that potentially faces radical surgery to cut it into unequal chunks if a majority of Scotland’s 4.2 million voters agree with Salmond and opt to break with the rest of Britain.

Snap polls judged Salmond the loser of the first debate, by 44% to 56%—closely mirroring the split polling organizations have been finding between supporters of Yes Scotland, the independence campaign, and Better Together, the organization arguing for maintaining the union. The second debate Monday night, by contrast, gifted Salmond a decisive victory over Better Together’s Darling, by 71% to 29%, giving heart to proponents of independence who have just three and a half weeks to convince the ranks of the undecided that smaller is better. “Not Tonight, Darling” read the headline in one Scottish tabloid.

Until last night, both campaigns had focused heavily on the economy. The Yes campaign has calculated that Scots would benefit by £600 ($995) a year in a standalone Scotland that kept its North Sea oil and gas revenues rather than sharing them with the rest of Britain. The No campaign “Better Together“—it tries to keep things polite by styling itself “No Thanks”—says taxpayers in an independent Scotland would have to shell out an additional £1,000 ($1,658) per annum to maintain current levels of public spending.

Standing at lecterns in front of a lurid purple backdrop at the Kelvingrove Art Gallery and Museum in Glasgow, the rotund Salmond and the spare Darling traded well-rehearsed blows about how much oil and gas is actually left to be pumped in the North Sea and what it would be worth. (The Scottish independence movement is counting on revenue from North Sea oil and gas to keep the new country financially afloat.) Darling pointed out that the market for oil and gas is “notoriously volatile and uncertain.” Salmond retorted that Darling and his pro-union colleagues were unique in viewing Scotland’s oil as a “curse.”

The men also tangled over the British pound. Salmond wants independent Scotland to keep using sterling in a formal currency union with the rest of Britain that would give Scotland a voice in the management of the currency. But Britain’s Conservative-Liberal Democrat coalition government and Darling’s opposition Labour Party have all ruled out such an arrangement. Last night Salmond scored a hit with the audience by asserting that if denied a currency union, Scotland could refuse to shoulder its share of public debt. The pro-union camp aims “to deny us the assets of the Bank of England,” he said. “The reason that won’t happen is that if you deny us the financial assets, then the U.K. will get stuck with all of the liabilities.” Darling called this scenario “nonsense”.

Scotland Prepares for Next Month's Vote on Independence

But the defining moment of the debate came not during one of these testy exchanges, but when a member of the audience asked about one of the few other British institutions as beloved both sides of the border as the BBC: the National Health Service (NHS). Salmond walked out from behind his lectern and came to the front of the stage. The only way to protect the NHS, he said, was to vote for independence. “To have a health service we can rely on, you’ve got to have financial control as well as political control.” He painted the choice for Scotland as one between a caring social democratic model championed by his government and the austerity policies that have been implemented by the Conservative-led ruling coalition in London. He then rounded on Darling, accusing the Labour politician of being “in bed with the Tory Party.”

That’s a potent insult in Scotland. Support for the Conservatives has never recovered from Margaret Thatcher’s decision to levy a hated tax called the Community Charge on Scots a year before introducing it to the rest of Britain, nor from Tory opposition to the devolution that the Labour Party eventually piloted to give Scotland the parliament and government Salmond now leads. There are twice as many pandas in Scotland as Conservative MPs, as Scots like to point out. (One of the two pandas housed in Edinburgh zoo, Tian Tian, is thought to be pregnant, so the bears may soon outnumber the sole Scottish Tory MP David Mundell by three to one.)

Salmond hopes Scottish voters will use the forthcoming referendum to define themselves against the rest of Britain—and in particular against the government in Westminster. But with the Yes campaign trailing the Nos by as much as 14 points, Salmond’s strong performance in the second debate may not be sufficient to persuade a majority in Scotland that the best way to protect their storied institutions against cuts is to cut them in two. 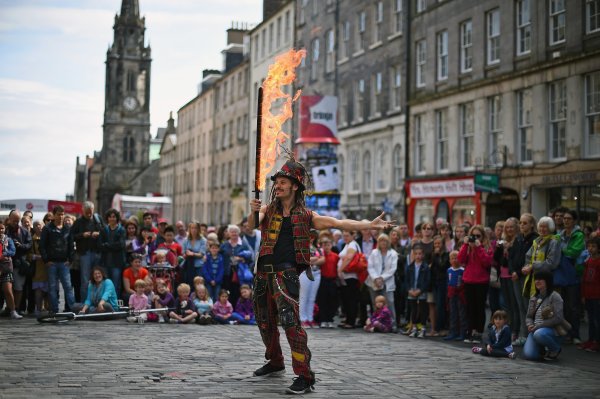 Scotland Prepares for Next Month's Vote on Independence
EDIT POST