California Governor Jerry Brown signed historic legislation Monday, mandating that every smartphone sold in California after July 1, 2015, be equipped by default with a kill switch, a feature that can render the device useless if stolen.

Proposed by state senator Mark Leno and endorsed by a bevy of law-enforcement officials, the new law — the first of its kind in the nation — is designed to curb cell-phone theft in cities like San Francisco, where more than 65% of all robberies involve stolen phones, or Oakland, where it’s 75%.

“California has just put smartphone thieves on notice,” Leno said in a statement. “Starting next year, all smartphones sold in California, and most likely every other state in the union, will come equipped with theft deterrent technology when they purchase new phones. Our efforts will effectively wipe out the incentive to steal smartphones and curb this crime of convenience, which is fueling street crime and violence within our communities.”

Leno, a San Francisco–area Democrat, and other proponents of the kill switch have argued that if manufacturers are obliged to make these changes for the most populous state in the nation, they’re more likely to alter all devices, in anticipation of similar legislation in other states.

Many of the biggest telecommunication companies, such as Apple, Google and Samsung, agreed earlier this year to voluntarily add kill-switch capability on phones after July 1 of next year. However, the companies did not agree to enable the kill switch by default, so much as make it available as a feature. “The bill requires theft-deterrent technology to come standard on all smartphones sold in California, a departure from the status quo where consumers are required to seek out and enable the technology,” Leno’s office said.

The law will apply to all phones sold to consumers online or in physical stores in California, regardless of where the phones are manufactured. The law does not specify exactly how manufacturers must implement the kill switch, though it must allow a phone owner to remotely “brick” their phone and erase data, as well as turn the phone back on if it should be misplaced instead of stolen.

Officials like Leno have said they’re more interested in seeing the system implemented than dictating precisely how it works.

San Francisco district attorney George Gascón, also a proponent of the bill, previously asserted that carriers and manufacturers were reluctant to install the switches because it could encroach on the lucrative $7 billion phone-insurance market. A wireless association that represents major carriers like AT&T and Sprint, known as CTIA, has said hesitance was due to security concerns, like the potential for phones to be killed by hackers.

On Monday, CTIA said in a statement that their members have already gone to great lengths to protect smartphone users, citing actions like the voluntary agreement made earlier this year, as well as education campaigns. And the association insinuated that such mandated changes may yield costs that are passed onto wireless consumers.

“Today’s action was unnecessary given the breadth of action the industry has taken,” said CTIA vice president Jamie Hastings. “Uniformity in the wireless industry created tremendous benefits for wireless consumers, including lower costs and phenomenal innovation. State-by-state technology mandates, such as this one, stifle those benefits and are detrimental to wireless consumers.”

Advocates like Gascón, however, believe that this is a first step toward a new kind of uniformity. “This epidemic has impacted millions across the nation and millions more around the globe,” he said. “But today we turn the page,” he said in a statement. “Seldom can a public safety crisis be addressed by a technological solution, but today wireless consumers everywhere can breathe a sigh of relief.” 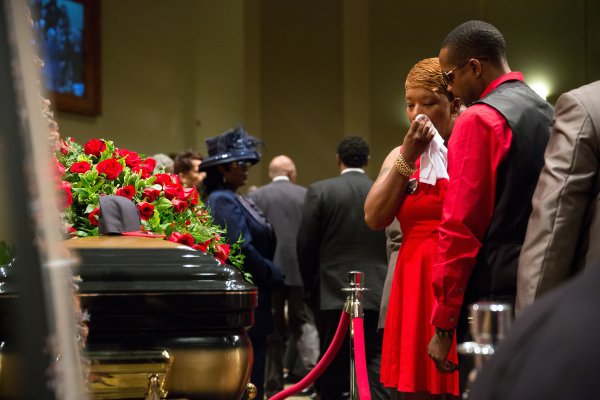 Ferguson Gathers to Say Farewell to Michael Brown
Next Up: Editor's Pick