Lesley McSpadden, mother of Michael Brown, wipes a tear as she stands by his casket at his the funeral at Friendly Temple Missionary Baptist Church in St. Louis, Monday, Aug. 25, 2014.
Richard Perry—AP
By Maya Rhodan

Hundreds of mourners gathered at the Friendly Temple Missionary Baptist Church in St Louis on Monday for the funeral of slain Missouri teen Michael Brown.

Musicians, politicians, civil rights activists, and residents of the teenager’s hometown of Ferguson joined the family in mourning the African American 18-year-old, whose fatal shooting by a police officer on Aug. 9 exposed racial tensions within the suburb and sparked widespread demonstrations and several nights of violent protest.

“Michael Brown’s blood is crying from the ground…crying for justice,” said Michael’s uncle, Charles Ewing. “At such a time as this, God is shaking this nation.”

Though it was a somber occasion, the church sanctuary was often overrun with praise as family members and friends took to the podium to share memories of the young man they called “Mike Mike.” Brown would have been about a week into his freshman year of college on Monday.

“He said one day the world would know his name,” a family member said. “He did not know how his name would be remembered, but we are here today remembering the name of Michael Brown.”

Eulogizers calling on members of the community to channel their anger over the death of the teen in positive ways—through voting and peaceful assembly—and calling on the country to take a hard look at how law enforcement engages with black and minority communities.

Brown’s mother Lesley McSpadden, wearing a red sleeveless dress, sat just steps from her son’s closed casket which was surrounded by enlarged photos of the teenager. Throughout the service, mourners reached to console McSpadden, who was often overcome with emotion.

Brown’s funeral comes two weeks after the teen was shot by Ferguson police officer Darren Wilson in circumstances that are still unclear. The investigation into Brown’s death is still ongoing, though the federal government has stepped in to conduct a separate analysis of the events alongside local authorities. 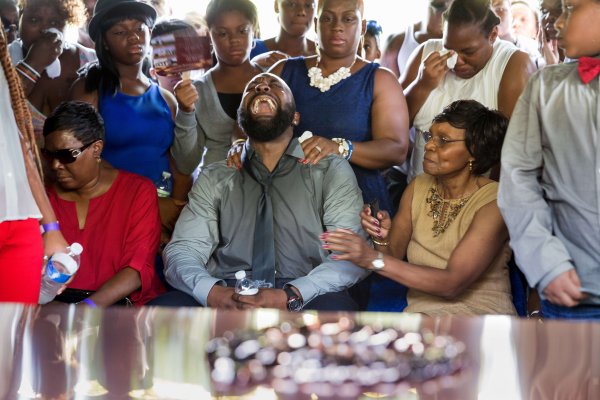 Mourners Gather to Say Goodbye to Michael Brown
Next Up: Editor's Pick