9 Feminist Takeaways From the VMAs

In fact, what it actually means is: the belief that all genders should be equal to each other politically, economically and socially. Thank you, Beyoncé.

A Tumblr blogger put it best: “If Jay Z can support Beyonce’s stance on feminism and not feel threatened by it and cheer on her work with their daughter in his arms then ya’ll motherf*****s ain’t got no excuses.” Amen.

You Can Use Fashion to Declare Your Independence

Katy Perry and RiFF RAFF dressed as early 00s power couple Britney Spears and Justin Timberlake on the red carpet. Even though it was a couple’s costume, Perry basically used the jean-clad rapper as a prop to state her independence while playing with rumors about her dating life.

Women Can Support Each Other

It was notable to hear Lorde introduce Taylor Swift as her “friend;” for Demi Lovato to tweet that she loves Nicki Minaj; to see female artists collaborating rather than tearing each other down.

Ladies Are Multifaceted, Get Over It

Yep, they can call themselves feminists and do it in a bodysuit.

The best presenters of the night were Laverne Cox, Taylor Schilling and Uzo Aduba from Orange Is the New Black, who compared the competitive world of the VMAs to the all women’s prison on their show.

Women Can Rock Out, Too

While announcing the award for Best Rock Video, presenter Trey Songz said — in an eye-roll moment— that “even a lady [was] in the mix.” Well that lady was Lorde, and she was the first woman to ever win in that category. Besides, it’s not like Trey Songz was nominated for anything.

Being a Mom is Empowering

Beyoncé’s tribute to her adorable daughter brought the diva — and likely the entire audience — to tears. Count motherhood among Beyoncé’s many achievements. Women, having it all: check! 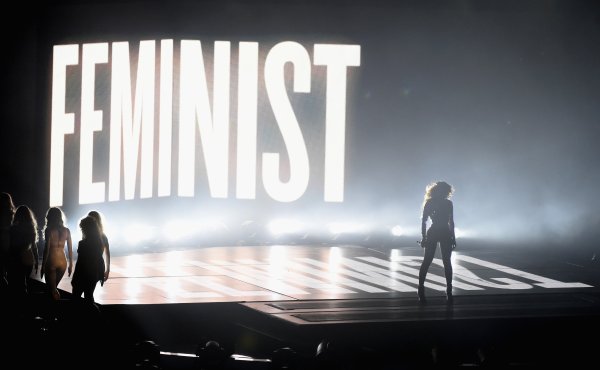 This Year's VMAs Were All About Empowered Women
Next Up: Editor's Pick