This is it. The final episode of the final season of True Blood. While we’ve all known that True Blood was ending this season, it seems like it’s both a long time coming and really sudden, but that duality makes perfect sense for a show that frequently (and increasingly) makes none at all. Seven seasons is a long time for a soapy show about vampires, shapeshifters, fairies and werewolves that dabbles in racy sex scenes; a show that delivers truly gruesome gore; a show that has no qualms about killing off main characters and appears intent on skipping off into the sunset with ears plugged singing La-La-La-La-La-We-Can’t-Hear-You while fans shake their heads in confusion. The end was a long time coming, but that doesn’t mean it’s not sad to think that Sunday nights no longer have make it possible to watch Jason Stackhouse-Eric Northamn sex scenes (except in fantasies, of course), listen to one of Lafayette’s snappy comebacks, or see Russell Edgington rip out the spinal cord of a news reporter just because he can. It’s time to let True Blood reach the True Death it’s earned..

Here’s what happened on the final episode of True Blood:

Bill shows up on Sookie’s door step to remind her that he knows what’s best for her. He tells her that she deserves everything, which in Bill’s Civil War-era-meets-1950s brain means having babies and grandbabies and then dying. Sookie asks the obvious question: “Why don’t you just dump me, you big dummy?” But he can’t quit her, so he must die for her own good. Bill loves her too much to live and she loves him too much to make her own choices with her own mind about her own life, because being a girl is hard and a man has to do all the hard thinking for her. Always one to make a bad situation worse, Bill asks her to use her fairy powers to zap him into the True Death, because it’s what’s best for her. She asks him to leave, but he convinces her to think about it and at this point, everyone is probably hoping that she does kill him, but just because he sucks. Figuratively — not just in the literal vampiric way.

Over at Fangtasia, Eric has a plan. He’s going to kill Gus, steal the cure, market New Blood and make no apologies. Pam is very much down with the plan (which they could have come up with three episodes ago). They force feed Sarah some of Pam’s blood, unchain her and set her free, knowing that Pam will be able to find her anywhere in the world with the magical vampire locator device that is their blood. Then they quickly dispatch with the Yakuza, blow Gus to smithereens in a fireball and wipe out the hit squad sent to Sookie’s house. Easy peasy.

Back at the Compton homestead, Jessica brings Hoyt home to re-meet Bill. She reminds Bill that she doesn’t want him to die or anything, but promises that she will survive. Bill hugs her and tells her that was just what he needed to hear. Then Bill awkwardly asks Hoyt if he has plans to ask Jessica to marry him and Jessica murders Bill. The End.

Fine, not the end. Hoyt chirpily agrees that heck yeah-and-aw-shucks he does want to marry Jess (the girl he just re-met yesterday). Jessica drags Bill into the other room and reminds him that not only is she a vampire, but she is also a girl and she has wedding day dreams that don’t involve her dying maker coercing her very new boyfriend into proposing. Bill explains that his death wish is to give Jessica away at her wedding. Is this really happening? Is the show really going out with a wedding? Apparently so. Jessica goes to tell Hoyt that they are getting hitched, so Bill can play the big patriarch and walk her down the aisle.

Meanwhile, Sookie is contemplating Bill’s assisted suicide. She’s also thinking back to the past when she and Tara were just sprouts caught in a rainstorm and Gram made them hot cocoa and reminded the young ladies that they can get married and have children if they want to, even if they are mind-readers and eventual vampires. Gram asks Tara to hold Sookie to that. Sookies heads to Jason’s house to talk, and is surprised to find Bridget there. Bridget assures her that they didn’t sleep together and Sookie reads her mind and finds out it’s true and discovers that Bridget is really sweet on Jason. Sookie wakes up Jason, not for advice, because bless him, Jason is not someone you go to for life advice even if he is one of the last humans in your town. She tells him about how Bill wants her to kill him and Jason takes the news surprisingly well. Their conversation is interrupted by phone calls from Hoyt and Jessica wanting to know if a) Jason will be his best man (even though Hoyt punched him out yesterday) and b) Jessica can borrow a wedding dress.

Fast forward a few hours and it’s a wedding! Arlene and Holly show up with Sheriff Andy, who apparently has completely forgiven Jessica for murdering his daughters. Bill calls Sheriff Andy into his office and reminds him that he’s his last living heir and since he can’t leave his estate to Jessica, he is thus leaving it to Andy. Andy balks at all of it, but Bill talks him through it: Take the house, rent it to Jessica and Hoyt for a dollar and if they forget to pay, let it slide. Forever. With a solemn, “copy that, Vampire Bill, consider it done,” it is done.

Then, it’s wedding time! Bill gets play old-timey patriarch and walk his vampire daughter down the aisle.. At the impromptu altar, Jessica kindly makes sure Hoyt still wants to get hitched. He assures her that he’s all in and Sheriff Andy gets to marrying them. While the ceremony goes on, Sookie realizes that she can suddenly read Bill’s mind, which apparently runs on a loop of, “Ow, everything hurts. I love Sookie. I love Jessica. Ow.” With no rings and no vows, the ceremony is rapid-fire, which is good because Bill is dying more quickly than expected.

Sookie heads to church to talk to the preacher about his thoughts on assisted suicide and whether God made them all — shapeshifters, vampires, mind reading fairies — or if some of them are just mistakes. The pastor assures her that God loves all his creatures, big or small, vampire or human. Then he tells Sookie that he believes God gave everyone free will to make their own choices, which was enough for Sookie to decide to kill Bill after she helps the preacher with his sermon. She calls Bill from the parking lot and tells him to meet her at the cemetery.

Sookie dresses for a funeral and meets Bill by his empty grave. She still doesn’t want to do it, but he assures her that much like Quaker Oats, it’s the right thing to do. He peels her arms away from his neck and stares into her eyes to say, “Thank you” all the while knowing that he made the choice for her. He climbs into the grave and opens his Civil War era coffin to find a photo of him and his daughter. Sookie suggests he quit reminiscing and get into his coffin so she can kill him already, promising that she’ll never forget him. He shrugs that he can’t say the same thing, because he doesn’t know what happens next (and he magically always knows the wrong thing to say). As he lies down in the coffin, Sookie pulls up a giant fairy fireball of death and prepares to throw it at him. But then she realizes something: Bill is asking too much. She stares at the fireball awhile and realizes that she can’t let it go, not because she doesn’t want Bill to die, but because one fireball will vanquish her fairy powers — including mind reading — forever. She won’t waste that on him, which is the bravest act of free will yet. She apologizes to Bill and offers to kill him with a stake instead. He’s cool with that, because God forbid he just greet the sunrise like Godric or anything when he can boss around Sookie instead. She climbs into the grave, kisses him on the forehead and puts the stake over his heart. Obviously she can’t do it alone, so he does it for her. The stake goes in and he explodes leaving Sookie stewing in Bill soup and crying with nothing but gore to dry her tears. She climbs out of the grave, covers the coffin and weeps for Vampire Bill. Sookie walks home looking like Carrie post-bucket of blood, but with her head held high. It’s just too bad that Bill couldn’t kill himself before Alcide died, so Sookie could go home and curl up next to that.

Flash forward to a year later when Eric and Pam are making an infomercial for New Blood, pitching it to the masses with the tagline “By vampires, for vampires.” Fast forward another three years and Eric and Pam are opening the New York Stock Exchange. Cut to Fangtasia, which is jumping again under the watchful eyes of a grim looking Eric. In the basement, Pam is taking cash from a steady stream of vamps interested in sucking the blood straight from Sarah Newlin, who is haunted by the ghost of her ex-husband.

It’s Thanksgiving day and Jason and Bridget are married with three children. Sookie is pregnant, and because this is the 1950s, that’s all we need to see to know that she is happy. Sam is back with Nicole and their daughter and a new baby. Holly, Sheriff Andy, Arlene and her vampire, Lafayette is still with James, Jessica and Hoyt are happy and everyone is there to celebrate together and laissez Bon Temps roulez ever onwards. 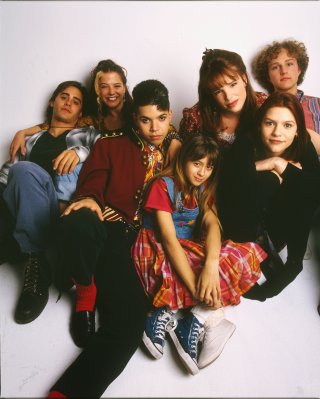 Winnie Holzman: My So-Called Life's Angela Chase Would Have Been a CIA Agent
Next Up: Editor's Pick