Mo’ne Davis is gone from this year’s Little League World Series. So now let’s talk a bit about a kid named Pierce Jones.

In any other year, when a girl isn’t throwing the first shutout in the history of the Little League World Series, or when she’s not becoming the first Little Leaguer to appear on the cover of Sports Illustrated, Jones’ name would be much more familiar. In the opening game for Jackie Robinson West Little League, hailing from Chicago’s South Side, Jones smacked three home runs and a triple. He led off another game with a long ball a few days later. Jones’ Jackie Robinson team defeated Davis’ Taney squad 6-5 on Thursday, to put the kids from the Windy City in the U.S. Championship Game on Saturday. They will face the undefeated Mountain Ridge team from Las Vegas.

Jackie Robinson is trying to make a little bit of baseball history too. If the Chicago squad can get by Las Vegas and win the championship game on Sunday, it would become the first all-African American team to win the Little League World Series. “I don’t know anyone here,” says Chicago White Sox executive vice president Kenny Williams, “who hasn’t been watching them.” In fact, last Monday more than five times as many Chicagoans watched the Little League team on ESPN than watched the White Sox play the Baltimore Orioles on Comcast Sports Net.

The kids have given their city a nice psychic lift. “Unfortunately, we’ve woken up to bad news far too often,” says Williams. “Everyone is aware of the murder rate in Chicago, particularly in western and southern parts of the city. Yes, these things are happening, but there are so many superstar people in these communities doing so many positive things. People volunteering to help at-risk youth, kids playing and learning from sports. And these kids, playing baseball, have helped show this city in such a different light. They are changing perceptions.”

And they could give baseball a boost. “This is so great for baseball in so many different ways,” says Major League Baseball commissioner Bud Selig. “It’s really been a thrill to watch.”

It’s no secret that the percentage of African-American players in the big leagues has drastically declined: 8.3% of players on this year’s opening day rosters were African-American. Back in 1975, 27% of all players were African-American. (Though one baseball researcher, Mark Amour, says the highest percentage of African-Americans in the major leagues was 19% in 1986; Amour argues the 1975 number included all dark-skinned players, including Latino-Americans.) Though a single Little League team can’t singlehandedly reverse this trend, “everything that has happened, having these kids play in prime-time on national television, and getting exposure in different media outlets, is surely raising awareness about baseball in African-American communities,” says New York Mets right fielder Curtis Granderson, who grew up in the Chicago area and donated $5 million to build a baseball stadium at his alma mater, the University of Illinois. Curtis Granderson Stadium also hosts events for 38 youth baseball organizations in the area. “It gets kids’ attention,” says Granderson, who is African-American. ”Wow, there’s an all-black baseball team? I haven’t seen that before.'”

Baseball’s fight for the attention of African-American athletes — and fans — faces serious hurdles. Travel baseball, which is more important than ever on the youth level, is prohibitively expensive, and doesn’t have the same level of grassroots investments — read, sneaker company — as a sport like basketball to offset some of these costs. Then, there’s the “cool/marketing factor,” as Granderson puts it. Granderson points to social media: LeBron James has 14.2 million Twitter followers. Dwayne Wade has 4.38 million. At cafeterias across the country, young African-Americans are talking about LeBron and D-Wade, not Clayton Kershaw (202,000 Twitter followers) and Mike Trout (520,000). So as kids start specializing in a single sport at younger and younger ages, African-Americans are bound to pick basketball or football, both of which offer a quicker, more glamorous path to the pros. Play a little college ball in front of millions, and skip all the bus rides in the minors, which weed out tons of prospects.

If African-Americans no longer feels a connection to baseball, “you’ve got to put a question mark on the game’s status as the national pastime,” says Granderson. “I’m just very excited for these Chicago kids, it’s been amazing how they’ve showcased their skills. And hopefully, the conversation about African-Americans and baseball continues, and some positives for our sport will come out of it.” 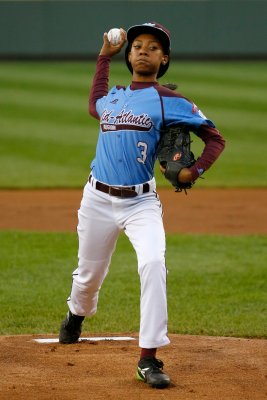 Mo’ne Davis' Team Out of Little League World Series
Next Up: Editor's Pick