A pro-Russian gunman is seen through a shrapnel hole after shelling in Donetsk on August 22, 2014.
Dimitar Dilkoff—AFP/Getty Images
By Denver Nicks

Artillery units being operated by Russian soldiers have crossed into Ukraine and are firing on Ukrainian forces, Western officials said Friday, in an apparent escalation of the ongoing conflict along the border.

Rhodes also called on Russia to remove a convoy of trucks that recently entered Ukraine, which Moscow says are bringing aid but whose arrival was not coordinated with the International Committee of the Red Cross. Ukraine has called the entry of the trucks a “direct invasion.”

“Russia should take the opportunity to remove this convoy from within Ukraine,” Rhodes said. “If they don’t, they will face additional costs and consequences from the United States and our partners in the international community.”

Russia has long been accused by the West of lending support, including arms and sometimes clandestine personnel, to pro-Russian separatists in the eastern half of Ukraine, but comments by Rhoades and NATO leaders marked the first time Western powers have accused Moscow of directly invading Ukrainian territory with Russian military units and personnel.

NATO Secretary General Anders Fogh Rasmussen, in a statement from Brussels, said the group has “also seen transfers of large quantities of advanced weapons, including tanks, armoured personnel carriers, and artillery to separatist groups in Eastern Ukraine. Moreover, NATO is observing an alarming build-up of Russian ground and air forces in the vicinity of Ukraine.”

Rasmussen condemned Moscow for allowing an ostensibly humanitarian economic convoy to enter Ukraine with no involvement from the International Committee of the Red Cross, which typically coordinates such missions. He went on to blame Russia for escalating tensions with a military buildup along the Ukrainian border.

“This is a blatant breach of Russia’s international commitments, including those made recently in Berlin and Geneva, and a further violation of Ukraine’s sovereignty by Russia,”Rasmussen said. “It can only deepen the crisis in the region, which Russia itself has created and has continued to fuel.”

“At the same time as Russian vehicles violate Ukraine’s sovereignty, Russia maintains a sizable military force on the Ukrainian border capable of invading Ukraine on very short notice,” National Security Council spokesperson Caitlin Hayden said in a statement. “It has repeatedly fired into Ukrainian territory, and has sent an ever-increasing stream of military equipment and fighters into Ukraine.” 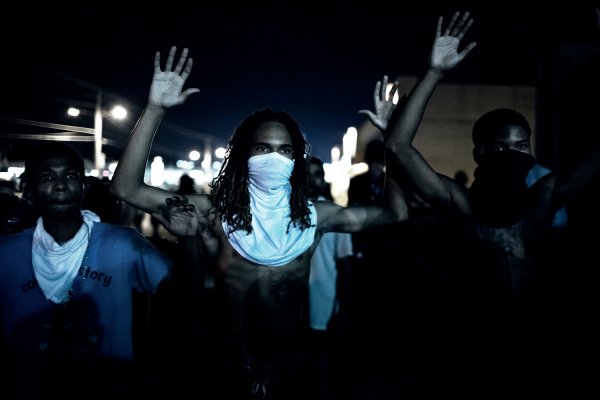 TIME's Pictures of the Week
Next Up: Editor's Pick