Little League World Series’ sensation, 13-year-old Mo’ne Davis, may have got pulled during her game on Wednesday night, but the event did garner the largest viewership of a Little League game in ESPN’s history, says the Hollywood Reporter.

Despite the 8-1 loss by Davis’ Philadelphia team Taney Dragons to Las Vegas’ Mountain Ridge, the coverage drew a 3.1 rating, which, according to ESPN, was up 155% from last year’s viewership. In Philadelphia, 14.9% of homes tuned in on Wednesday, while 16.3% watched from their homes in Las Vegas. Nearly 5 million viewers in all tuned in for Wednesday night’s game.

Davis was catapulted to fame this summer as the first female in the history of the Little League World Series to pitch a shutout game. She landed a Sports Illustrated cover and a ton of fans.

However, her unfettered success took a turn when she was pulled in the third inning after allowing Las Vegas three runs on Wednesday. She was then unable to pitch against Chicago during Thursday night’s game (because of restrictions designed to prevent arm strain). And because Philadelphia lost 5-6, the possibility of her taking to the mound during a Saturday night rematch with Las Vegas was quashed.

Davis’ manager Alex Rice nonetheless has big hopes for the 13-year-old’s future. “The world’s her oyster, right?” Rice told the Associated Press after the Chicago loss on Thursday. “Mo’ne will figure out her future, and it’s going to be terrific.” 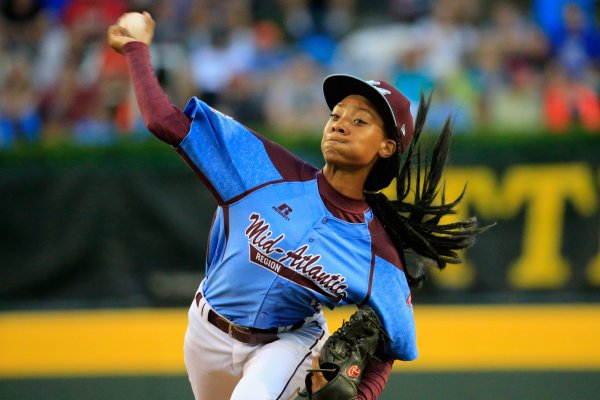