A fruit picker holds a quart basket of Saskatoon berries at G&S Orchards in Walworth, N.Y. on June 26, 2013 .
Jim Ochterski—AP
By Sebastien Malo

“One berry, two berry, pick me a…Saskatoon berry?!” The name of this little-known purple fruit doesn’t exactly roll off the tongue. No marketer’s dream here. And now some Canadians who have long cultivated the tiny super-food are crying foul over a quiet U.S.-led push to re-brand it: from saskatoon to juneberry. And there’s no truce in sight.

Thanks to its powerful anti-oxidant properties and to the entrepreneurial efforts of a handful of commercial growers, this under-the-radar berry has garnered a new wave of interest in parts of the U.S. Some think this delicious fruit–it tastes like a mixture of cherries, almonds and grapes– could be on its way to hit the super-fruit jackpot, a market whose juice segment alone will be worth $10 billion by 2017, predicts research firm Euromonitor International.

If only Americans could pronounce its name. Or spell it. (Canadians, of course, have no diction problems since the name is derived from the city in the Saskatchewan province, Saskatoon.)

Jim Fang, saskatoon berry expert and professor—he fittingly hails from the University of Saskatchewan—is in the midst of establishing the fruit’s precise health effects, which compare to those of the blueberry, the superfruit darling of the past. His prediction: “The saskatoon berry will be offered as an alternative to the blueberry.” The two fruits even look alike.

But Canadian cultivators are a few steps ahead of their southern counterparts: Growers there scooped up 575 tons of the berry last year — dwarfing the United States’ production which is estimated at four tons — and have just begun a promising harvest that will span August.

And the fruit is so popular in Canada it has even shaped the country’s geography. Stroll the streets of Saskatoon, population 200,000, and you’ll run into a 4-meter tall bronze sculpture capturing the city’s berry-driven founding myth. It depicts a Native American chief pointing to the town’s future location while an explorer to his side dubs it the saskatoon, named after the berry long-known by the indigenous population. Canadians kept the moniker.

Yet, many Americans haven’t taken to the name. Maybe because we’re still grappling with the acai berry pronunciation.

“There are certain things that Canadians and Americans do differently and names on things happen to be one of those,” says Jim Ochterski, agriculture issues leader at Cornell University’s Cooperative Extension. The institution has championed the berry stateside by introducing it to cultivators. “We decided to predominantly call them juneberries.”

When a berry is in a pickle

Some Canadians are offended by the name change — to the extent Canadians can get offended.

Sandra Purdy, president of the Saskatoon Berry Council of Canada, the trade group representing the industry, is the de facto saskatoon berry queen of Canada. At a time when funding was flowing to Silicon Valley tech start-ups, she pitched the project of building a saskatoon business empire on the television show “Dragon’s Den,” the Canadian equivalent of “The Apprentice.” An equity firm eventually took the bait and Purdy’s company, Prairie Berries, has grown into one of the largest saskatoon berry producers in Canada.

Purdy says she felt “slighted” when, earlier this summer, she received an email from Cornell’s Cooperative Extension suggesting that Canadian growers use juneberry instead of saskatoon berry “to help overall marketing of the berry.”

“That won’t happen,” she said, “Especially given that they got those plants from Saskatchewan and our Canadian-grown berries.”

The berry is such a source of pride in Canada that it drives a few thousand enthusiasts each year to gather in the town of Mortlach, Saskatchewan, for the Saskatoon Berry Festival — a get together that centers around gobbling the berry in large quantities. (A recent slogan of the gathering: “2,500 people with purple teeth can’t be wrong…”)

Still, Americans are indebted to Canadians when it comes to this tongue-tying fruit.

When Cornell Cooperative Extension began growing juneberry in 2010, it brought in its plants from Canada, where a domesticated cultivar grows more berries per bush than any of its cousins across North America.

But Ochterski and his group from Cornell Cooperative Extension followed the money trail. When their market research revealed that Canada’s saskatoon berries seduced the palate of U.S. consumers, but the name didn’t resonate nearly as well as ‘juneberry’ did, which is what the variety found in the Northeast is called, they switched.

“It’s not the Canadian name but it’s the name that seems to sell,” says Ochterski.

It’s not a unanimous stance, however. “I just think ‘saskatoon’ has a sexier name to it than a ‘juneberry,’” says Steve Fouch, one of the founders of a group of growers in Michigan assembled under the Saskatoon Berry Institute of North America.

True to their reputation, Canadians have striven for a compromise. The packages of frozen berries Purdy exports to the U.S. were originally only labeled as ‘saskatoon berries.’ Prairie Berries now offers to its U.S. customers adding, ‘aka june berry’ – but “only… if the customer we are selling to specifically requests us to label it as such,” said Purdy.

Upon hearing about the disagreement, Faye Campbell, the village administrator in Mortlach, Canada where the Saskatoon Berry Festival took place earlier this month, attempts to reach a middle ground. “I guess we might have to change the name of the festival?” she said. “Or not?” 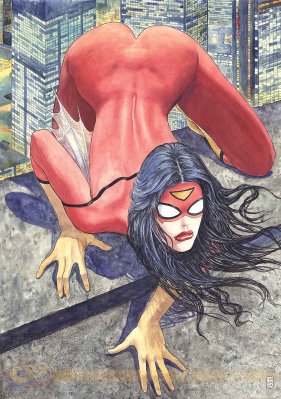 Should We Forgive Marvel for That Awful Spider-Woman Cover ?
Next Up: Editor's Pick