Humanities, All Too Humanities!

I majored in English for one reason: it was easy. All I had to do was read books and, crucially, only books written in the one language I knew. A few months ago, I went to lunch with a fellow Stanford graduate, who has a hugely successful Internet company. He asked me what I did in college, since I wasn’t busy learning to code. I stammered for a bit about bonding with dormmates, figuring out I could fit my entire body inside a clothes dryer and trying to hook up with this girl who was more of a friend but also sometimes seemed like more than a friend but it turned out, you know, was a friend after all. Sensing his disgust, I added that I worked at the school paper, which satisfied him because it sounded industrious.

Since I graduated in 1993, it has become uncool to major in the humanities. In 2010, 7% of U.S. graduates majored in one of the liberal arts, compared with 14% in 1966, which, percentage-wise, is some number I don’t understand, since I majored in English. A third fewer Harvard freshmen are interested in the humanities than the freshmen 10 years ago, and while nearly half the faculty at Stanford teach humanities, fewer than 20% of applicants are interested in taking their classes. Instead, students are choosing computer science or other STEM disciplines–science, technology, engineering and math. Oddly, the liberal arts, which place more stress on the clever use of words, have not come up with a snazzy acronym of their own, like WHAPPEAR (women’s and gender studies, history, art, psychology, philosophy, East Asian studies, African studies and religious studies). The liberal arts are a lot touchier than the sciences about needing to feel included.

I don’t regret my English major or my master’s in English, which proved invaluable when I bragged about it in this sentence. And I think colleges should have more humanities majors. But I’m not trying to lure kids into liberal-arts majors by telling them that history and literature instill empathy or teach communication skills necessary for leading a business. Because I didn’t choose not to major in physics. Physics chose not to have me major in it, by making absolutely no sense at all.

The problem isn’t that kids avoid the liberal arts; it’s that superselective colleges are not picking the kinds of kids who will be liberal-arts majors. Instead, they’re overselecting high school science geeks simply because they’re smarter and will advance technology, cure diseases and make millions that they can then donate to the university.

We live in a time when smart people want to discuss only politics, technology and economics–a time when we believe that all progress is technological. But lots of history’s greatest leaps came from the humanities: the Renaissance, the Enlightenment, Romanticism, civil rights, getting girls to go wild. In 16th century Florence, people met in groups to argue about opera. In 1913, Parisians rioted over a symphony for being too rhythmic. And in the early 2000s, women met for book groups in which they didn’t actually read the books but drank a lot of wine and complained about their husbands, which is also technically the humanities.

The sciences, by comparison, have not provided any Presidents or Popes. But they have given us a lot of people who tell us to eat something and then, a few years later, to totally not eat that thing. Nietzsche warned against swapping in science for religion and blindly praying to it instead: “Science is a hiding place for every kind of cowardice, disbelief, remorse, despectio sui, bad conscience–it is the very anxiety that springs from having no ideal, the suffering from the lack of a great love.” Admittedly, Nietzsche would probably have had a better attitude if scientists had figured out how to cure his syphilis.

I used to feel bad that I didn’t use my education to try to cure cancer. Then I realized that, at best, I would have been an assistant to someone curing cancer, and I would have mostly slowed up the cancer curing with unappreciated cancer jokes. This column, believe it or not, is the best use of my brain. Even more strangely, the most famous people from my class–from the beginning of the early-1990s Internet boom–are me and Italy’s hugely popular Marilyn Monroe impersonator, actress–singer–Playboy model Justine Mattera, who majored in English and Italian literature. The world wants not just utilitarian goods but a panoply of ways for expressing our experience. Which is the very thing we majored in. Without our education, the talents of us useless liberal-arts types would be wasted, our Italian Marilyn Monroe impressions lacking historical context, our humor columns sans pompous Nietzsche references.

This great moment for technology is only a moment. Just as the transportation revolution ended 50 years ago, when planes stopped going any faster, the information revolution will sputter as well. But the revolutionary ideas that will once again change everything will come from our humanities departments. Though I have no idea who will give them money in the meantime. I leave that up to Justine. 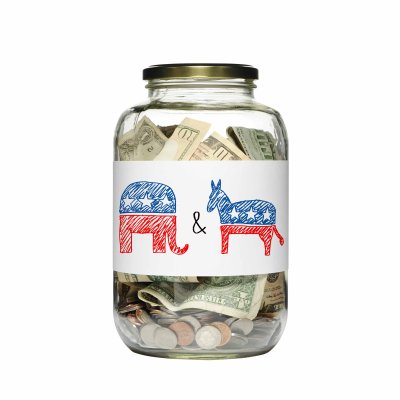 Double Dipping for America
Next Up: Editor's Pick