I’m looking at a punk-rock poodle. Or at least that’s what I think I’m looking at. His name is Jasper; he’s short and covered in curly gray-white hair. He has what looks like a mohawk on top of his head, and it’s so well constructed that I’m tempted to ask his groomer, Wendy Wouters, if Jasper is a fan of the Sex Pistols.

Turns out Jasper’s not punk at all. Nor is he a poodle. He’s an energetic 11-month-old Bedlington terrier–and he’s just been dubbed junior-level champion of his breed. Jasper, Wouters and I are standing in a lively (and smelly) dog exercise area outside Helsinki’s gargantuan Messukeskus exhibition center, which is playing host to the 2014 World Dog Show, sponsored by the Fédération Cynologique Internationale–the association of international kennel clubs. Here, a dizzying 21,247 pooches are set to compete over three days for the title of Best in Show at one of the planet’s largest canine competitions.

Wouters came all the way to Finland from her native Australia to help groom Jasper for the show. Usually, she says, he’s fuzzier. When another Bedlington struts past looking almost identical, she points out their differences. “This one is a bit woollier,” she says, pointing at the newcomer’s head. “I’m a good hairdresser,” she adds, laughing. “That’s why I won today!”

Inside the arena, despondent-looking Shar-Peis are having their wrinkles cleaned, elegant Afghans are being blow-dried, and heel-bothering Chihuahuas are getting their nails clipped. If the dogs are all categorized by breed, their human counterparts have their own assigned roles: owners foot the bills and take home the prizes, breeders maintain the strict bloodlines, groomers style the dogs in exaggerated explosions of fur, and handlers–often dressed in brashly colored suits–put them through paces in front of judges. Many here, I quickly learn, have variously participated in all five roles.

Ringside at a Yorkshire-terrier competition, Olga Zubkova, 29, from Riga, Latvia, places a red bow onto little Viktorius Dei York’s head. The 10-year-old male Yorkie looks like something Jim Henson might have dreamed up–all wisps of honey-colored locks framing a tiny button nose. Zubkova–owner, groomer and handler–tells me that Viktorius spends most days with curlers and conditioner in his hair. When tourney time approaches, Zubkova rolls out the curlers and combs him before ironing his hair with a heated straightener. She estimates that this elaborate ritual costs her thousands of dollars every year. But it’s worth it, she says. Viktorius, I later find out, picks up second prize.

After the BOB–Best of Breed–winners are named, dogs compete against others in their class, ranging from terriers to pointing dogs to sheepdogs and cattle dogs. Winners of these categories battle it out to be top dog, or Best in Show. Winners generally conform closely to what are known as breed standards, demanding benchmarks that specify optimum appearance and temperament. (The standards are also one of the dog world’s most controversial aspects, decried by PETA and linked to hereditary health issues, according to 2009 U.K. research.) This year’s winner is an adorable black affenpinscher–a curly-haired toy breed named for its monkey-like face–named Tricky Ricky From Yarrow Hi-Tech.

Tricky Ricky may have bested thousands of other immaculate purebreds, but all his Indonesian owners, Jongkie Budiman and Mieke Cooijmans, get is a hand-blown glass dog figurine and vase by Finnish artisan Tarmo Maaronen. Despite the $100 entry fee, there is no cash prize here or at most dog shows (though owners of high-profile winners might see an increase in breeding requests, which can allow them to charge higher stud fees). So what’s the attraction?

Satu Timlin, 36, a breeder from Finland whose majestic bullmastiff Bridget won a BOB title, says most come here to socialize and give their dogs exposure. “It’s more to see friends, to get connected,” she says. We pause, and I glance at her with disbelief. “But of course,” she adds, smiling, “we compete to win.” 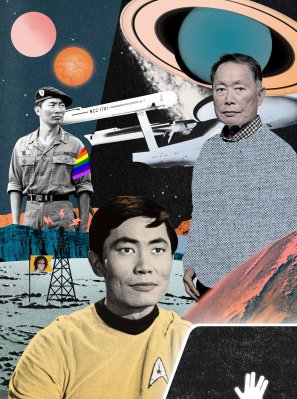 To Be Takei Means There’s No Such Thing as Oversharing
Next Up: Editor's Pick