Backlog at the Border

For the 1,071 unaccompanied minors who have crossed the southwestern border this year and ended up in Louisiana, the path to the future runs through a courtroom on the 24th floor of an office tower in the heart of New Orleans.

Here, past the heavy doors and security guards, a rotating detail of judges determines the fate of the immigrant children streaming across the border and into the state. As they arrive in record numbers, the New Orleans immigration court is buckling under the strain.

During the first six months of 2014, the court took on 450 juvenile immigration cases, according to government records obtained by Syracuse University’s Transactional Records Access Clearinghouse, putting it on pace to shatter last year’s total of 540 cases. Three years ago, it had 71.

It’s a pattern reflected across the nation, where immigration courts have become choke points in the border crisis. Overburdened and underfunded, they face enormous case backlogs and a lack of attorneys to perform work that must often be done pro bono. At the end of June, the number of cases pending in U.S. immigration courts had climbed to a record high of 375,503, according to data amassed by Syracuse.

The stress is particularly acute in New Orleans, where a large Honduran population has made the Crescent City a magnet for kids fleeing violence in the troubled Central American country. Yet Louisiana has only about six nonprofit immigration lawyers devoted to serving them, says Jennifer Rizzo, the national pro bono promotion counsel for Human Rights First.

As a result, children are regularly summoned without any legal representation to complex proceedings that will shape their future. At the end of June, the New Orleans immigration court had 1,216 pending juvenile immigration cases. In 991 of them–81%–the child has no lawyer. Overall, 87% of immigrants detained in the state lack an attorney, according to a study by Human Rights First. “Things have reached a crisis point,” Rizzo says.

Legal representation may be the most important factor in determining whether an undocumented immigrant remains in the U.S. According to the Syracuse analysis of 100,000 case records, immigrant children represented by an attorney are deported about half the time. In cases in which juveniles went without an attorney, the success rate for staying was just 1 in 10.

“There’s a likelihood that these kids don’t know how to obtain legal representation because nobody speaks English,” says Hiroko Kusuda, whose law clinic at Loyola University in New Orleans is one of just three listed service providers in the state. “If they don’t have legal representation, the chances of them getting relief from deportation are close to zilch.” The Justice Department’s Executive Office for Immigration Review provides interpreter services for immigrant children for whom English is a challenge, but it cannot subsidize lawyers.

These issues were multiplying even before the latest influx of children. Louisiana has just two immigration courts, and the statewide case backlog has soared to 6,703, up from just 732 a decade ago. “Now you don’t even get your first hearing for a year,” says Ken Mayeaux, a professor at Louisiana State University Law Center, who runs an immigration clinic for students. Nationally, the average wait time for pending cases has climbed to 587 days.

It doesn’t help that the New Orleans court is without a single full-time judge. Instead, a rotating trio of jurists handle the docket, usually commuting from the other court, in Oakdale, more than three hours northwest of New Orleans. The staffing shortage is the result of a hiring freeze imposed in 2011 by Attorney General Eric Holder to cut costs in the midst of the recession. The freeze was lifted in February.

The Justice Department declined to say when New Orleans will have a new full-time judge. 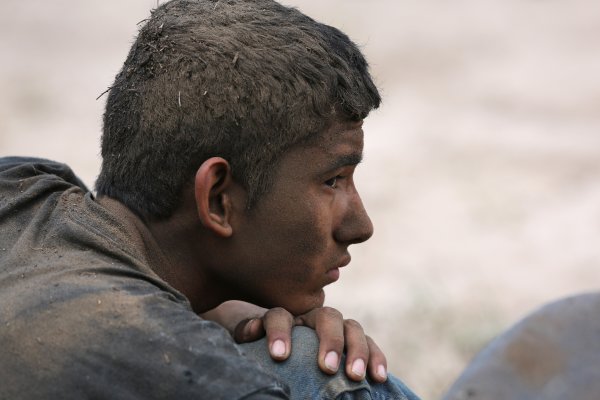 A Mayor’s Advice on the Unaccompanied-Minor Crisis
Next Up: Editor's Pick