TV Goes to the Ends of the World

Back in 1983, when you killed millions of people on prime-time TV, that was enough to get people’s attention. ABC’s The Day After, about a nuclear war and its nightmarish repercussions, spurred a national debate. It was an event, shocking enough that President Ronald Reagan later said the movie changed his thinking on arms control.

Today the world ends several times a week. You can see humanity decimated by virus (TNT’s The Last Ship), a civil war among angels (Syfy’s Dominion), infertility (Lifetime’s The Lottery) and unexplained sudden disappearance (HBO’s The Leftovers). And that’s just this summer. Stick around and you can witness civilization destroyed by plague (Syfy’s coming adaptation of 12 Monkeys), aliens (TNT’s Falling Skies) and a mysterious collapse of technology (Amazon’s The After).

You can trace these boom times for the end times back to AMC’s The Walking Dead, the zombie splatterama that disproved the rule that pop-culture apocalypses had to end. Spending a two-hour movie in a depopulated hellscape was one thing. But who would come back week after week to see characters they cared about suffer in unending bleakness, escapable only by the release of death–or worse, cancellation?

Instead, fans, like zombies, returned hungrier and more numerous the more the show slopped out gore: over 28 million watched each week, counting reruns and streaming. It’s relentlessly dismal, slaughtering not only zombies but also good people, mothers, children. Rick Grimes (Andrew Lincoln) and his band of survivors wander a blasted South, fearing not only “walkers” but also other humans who have become monsters themselves amid the privation.

In most of today’s postapocalypse series, disaster no longer comes from geopolitical conflict or ideological terrorism. (The CW’s The 100, set after a nuclear war, is almost a quaint throwback.) It just happens. We die from mystery phenomena or pestilences that don’t even have the decency to hate us. The zombies of The Walking Dead are created by a virus, the vampires of FX’s blood feast The Strain by a parasite that uses humans as hosts.

So where cold war disaster scenarios warned that humankind had become recklessly mighty, these new postapocalypses suggest that we are insignificant, riders on the earth who can be shrugged off like a dog scratching away a flea. It’s a flavor of doomsday that echoes headlines about Ebola outbreaks, natural disasters, toxic tap water, smallpox vials misplaced in federal storage and CDC employees exposed to anthrax. This is the way the world ends now: not with a bang but an “oops!” Turning these amorphous existential threats into drama at least imposes order and, thus, the feeling of control.

The ironic effect of all this doom, though, is that it can manage to make the end of the world boring. A decade ago, Michael Bay’s The Last Ship, in which a U.S. naval destroyer discovers that its crew is among the few survivors of a global pandemic, would have been one of the most daring things on TV. Today, with its Baysian explosions and devious Russian villains, it’s as mundane as a cop procedural–CSI: Armageddon.

Which may be why the best of this year’s worst-case scenarios is the one with the lowest body count. Indeed, on The Leftovers, it’s not clear that anyone died at all; one Oct. 14, 2% of the world’s population simply up and vanished. It seems like the rapture, except that it took the good and evil, people of all faiths and none, the elderly and babies, and Gary Busey. Three years later, civilization has gone on, basically: there is still government and electricity and Toyota Priuses. But things are unraveling. The pickings are easy for nihilists, con artists and cults–chief among them, the Guilty Remnant, whose chain-smoking, mute, clad-in-white members are determined to provoke those who would try to move on with their lives.

The Leftovers doesn’t suggest that we’ll ever find out where the Departed went or why. Instead, it focuses on loss and those who live with it: a woman who lost her family, a priest who lost his flock, a lawman who lost his faith in order. It’s eerie and gorgeous, with moments of grace, believing–in the words of a verse from Ecclesiastes it quotes–that “for whoever is joined with all the living, there is hope.” The postapocalypse is a bummer. But if we hang in there, The Leftovers suggests, there’s always the post-postapocalypse. 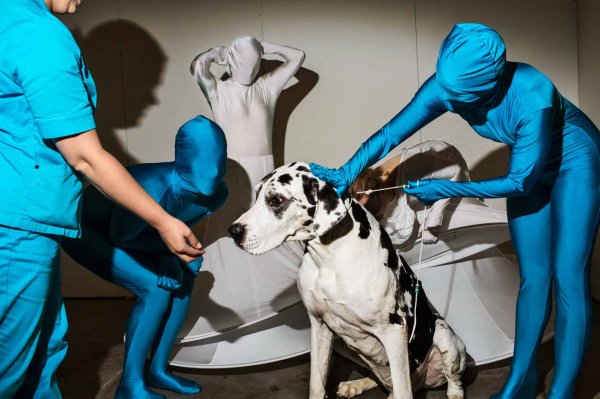 Primping Pooches at the 2014 World Dog Show
Next Up: Editor's Pick