Justice is a long way off. But on Wednesday night in Ferguson, Mo., there was finally a stretch of peace.

For the first evening in nearly a week, protests here went off unmarred by any major skirmishes between police and protesters. On a rainy night, a smaller-than-usual group of protesters still paced the wet streets, doing laps along West Florissant Avenue as their voices grew hoarse from chanting slogans. Small groups huddled along the battered boulevard, mostly unbothered by a police presence reduced from previous nights.

It was a rare respite. For nearly a fortnight, days in Ferguson have been boisterous but peaceful. But when the sun goes down, the dynamic has changed as a cadre of confrontational youth stir up trouble under the cover of night.

Wednesday was different. U.S. Attorney General Eric Holder touched down in Ferguson Wednesday morning, meeting with community leaders, local residents, students and patrons at a local diner. The trip was a bid to turn down the thermostat on an overheated city that has been aflame since Aug. 9, when Michael Brown, an unarmed 18-year-old black man, was shot to death by a white police officer.

The visit from Holder, who is not just the nation’s top cop but also a black man who has spoken frankly about race, seemed to calm a mostly black community that has complained vehemently about its treatment at the hands of a nearly all-white police force. Holder also arrived on the day that a grand jury began to hear evidence in Brown’s shooting death. The attorney general’s trip was a token of solidarity, as Holder offered assurances that the federal government—which is conducting its own civil rights probe into the case—will conduct a thorough investigation.

The beleaguered city also got help from the weather. Wednesday was sweltering, with a soggy humidity that kept daytime street protests to a minimum; at mid-afternoon, West Florissant almost seemed back to normal. As darkness descended, lightning forked through the sky and thunder rumbled, announcing a rainstorm that kept troublemakers off the streets.

However, there were still some skirmishes. At one point, two white people—a woman and a man—arrived brandishing signs advertising support for Darren Wilson, the 28-year-old six-year veteran of the Ferguson Police Department who shot Brown on Aug. 9. They slid into the crowd, sparking a brief outrage. Water bottles went flying. But the police did not overreact, instead spiriting the agitators away from the crowd and off the scene. Throughout the evening, angry protesters vented at police, screaming about their treatment, including a rule that prohibits people from gathering in place, forcing the crowd to stay mobile by looping up and down the street.

And so they did. “We’re young! We’re strong! We’re marching all night long!” they chanted. Peace hasn’t come yet to this troubled St. Louis suburb; it remains a tinderbox susceptible to a spark. But for the first time in a long time on Wednesday, that spark never came. 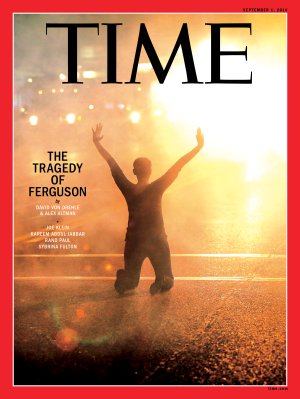