Can Iraq's New Prime Minister Keep the Sunnis on Side?

Even this Iraqi refugee camp is divided by sect. Displaced Kurds shelter in a large warehouse here in Bahirka, the members of the Shia Shabak minority have their UN tents in a line outside and the Sunni Arabs are gathered by the back fence. There is even a corner for the seven Palestinian families that fled Mosul.

Ibrahim, who gave only his first name, is living in the back row of Sunni tents with his wife and four children.

“Of course I blame the Iraqi government for this,” said Ibrahim, who worked as a day laborer and rented a small apartment for his family in Mosul before they fled June 10. “During Prime Minister Maliki’s time, Mosul was like a fortress. There were check-points everywhere.”

This heavy security in Sunni areas like Mosul created resentment against the central government, as many felt the regions had been occupied by security forces loyal to then Prime Minister Nouri al-Maliki, who announced he would step down from the premiership on Aug. 15.

Maliki fostered a sharp sectarian split in Iraq, parceling out resources and ministerial roles to his Shiite allies and alienating the Sunnis who populate much of the northern territory taken by the Islamic State of Iraq and Syria (ISIS) earlier this summer. Having been estranged by Maliki’s government, the well-armed Sunni tribes of the Nineveh Province put up little resistance to the militants, allowing the group to expand quickly in the region. The militants now control one-third of Iraq and the organization is easily recruiting from the disenfranchised Sunni population. ISIS is believed to have enlisted thousands of new fighters in recent months.

“People don’t like ISIS, but they just hated al-Maliki. And ISIS was the only alternative,” said Ibrahim.

Now, there is a new alternative — Iraq’s new prime minister Haider al-Abadi, a veteran Shiite lawmaker also from al-Maliki’s Dawa Party. He has promised a more inclusive national government, and compromise with the Kurds. But to beat back the spread of ISIS, he’ll need to win over Sunnis bruised by years of Maliki’s leadership—not just the political leadership, but also the Sunni tribal chiefs.

“We are optimistic about participating in the new government,” says Hamed al-Mutlaq, a member of the Iraqi parliament and an influential Sunni politician. “But first we want a real change, not just a change of faces in the government.”

Real change, says al-Mutlaq, would mean ending the division of powers along sectarian lines, and a rebuilding of Iraq’s armed forces, which many say al-Maliki attempted to mould into his own personal militia. If these changes are met, he says, Sunnis might unite against ISIS. “We want safety and security in Iraq and want to get rid of ISIS, Al-Qaeda and the all the militias in Iraq.”

But while politicians are showing optimism, or at very least willingness, so far the Sunni tribes of the Nineveh Province have shown no signs of pivoting toward the central government from the leadership offered by ISIS — and some analysts are losing hope that they might. “The situation has reached such a level that I’m not sure it’s reversible. I’m not sure we can solve it,” says Maria Fantappie, an Iraq analyst with International Crisis Group.

Bringing tribal leaders back into the fold would require al-Abadi to decentralize authority from Baghdad to empower Sunni provincial leaders, said Fantappie. “But again, to tell you the truth, from the contacts I have with the Sunni tribes even this project is unlikely to succeed. Unfortunately, I think we reached the point where the ISIS project has become very attractive for many Sunnis,” says Fantappie.

Some, but not all. Maysar, a Sunni from Mosul living in the refugee camp in Bahirka, voiced worries that everyone who remained in the city will be accused of siding with ISIS when they are simply attempting to live under the new regime. The 35-year-old, who would only give his first name, says he was one of the few police who tried to fight back against the militants when they entered the city three months ago, and now feels like an outcast.

“When Haidar Al-Abadi chooses his government he must be very careful. He must deal very carefully with people of Mosul,” he says. Many in these areas are sitting quietly because they fear ISIS as long as the group remain in control, he says. “Yes, some people there are with ISIS. But he can’t just consider everyone who remains in Mosul to be a terrorist.” 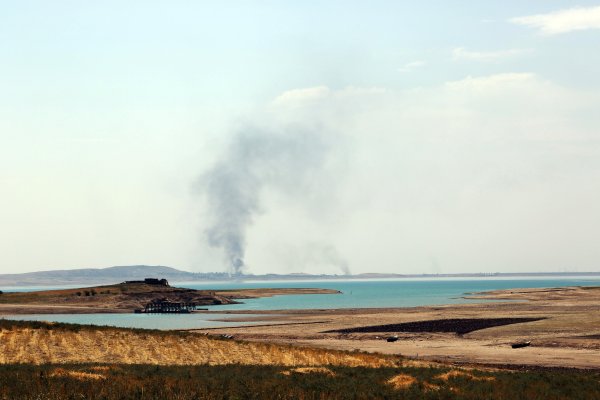