The Green Activist Who Might Become Brazil's Next President

No sooner had news broken of the small aircraft crash that killed presidential candidate Eduardo Campos than attention in Brazil turned to Marina Silva.

The late politician’s running mate, a former environment minister and third place finisher in the first round of voting in 2010’s presidential race, was the obvious choice to replace him as candidate for the Brazilian Socialist Party, PSB.

And yet Silva, whose nomination is expected to be confirmed by the party on Aug. 20., seemed almost reluctant to take Campos’ place. People who know Silva, a deeply religious evangelical Christian, say she is motivated by a sense of responsibility rather than raw ambition.

“She is very simple and true person, very correct. She says what she thinks. Although she is a political being, she is a very truthful being,” said Marília de Camargo Cesar, who wrote a 2010 biography of Silva.

Pollsters say Silva is now the politician most likely to pick up the previously undecided ‘protest vote’ that sent millions of Brazilians onto the streets in massed demonstrations in June last year.

On Monday, the first poll since Campos’s death gave Silva 21%, technically level (within the margin of error) with Aécio Neves, from the center-right Brazilian Social Democratic Party, PSDB, who had 20%. Neves had until then been the main threat to President Dilma Rousseff, up for re-election and polling at 36%. Rousseff’s Workers Party, PT, has run Brazil since 2003.

In one second round simulation, Silva had 47% to the president’s 43% – technically, neck and neck. Until Monday, Roussef had been expected to easily win re-election on Oct. 5. And now, the world is scrambling to find out more about the environmental activist who could yet be Brazil’s next president.

Maria Osmarina Marina Silva Vaz de Lima was born on Feb. 8 1958 in the tiny forest community of Breu Velho in Brazil’s remote Acre state, in the Amazon. Her parents had eleven children, three of whom died. She grew up among desperately poor, illiterate rubber tappers, dreamed of becoming a nun, and only learnt to read as a teenager.

Marina – as she is known in Brazil – lost her mother at 15 and has suffered constant health problems – she survived five malaria bouts, hepatitis and a heavy metal poisoning which was probably caused by treatment for leishmaniasis, a disease spread by sandflies. “She has been close to death so many times,” said Cesar.

Her humble background gives her impeccable credentials for the millions of lower income Brazilians who voted for Rousseff’s predecessor, mentor and fellow PT member, the charismatic Luiz Inácio da Silva, or Lula. Millions advanced to a new lower middle class during 12 years of PT rule.

Silva’s name was chanted by some of the 130,000 mourners who turned out for Eduardo Campos’s requiem and funeral on Sunday in Recife, capital of the northeastern Brazilian state of Pernambuco he ran as governor for eight years. Rousseff, Lula and Neves all attended.

A clearly emotional Silva, who almost joined Campos on the ill-fated plane journey, was highly visible throughout the service, and spent much of it hand in hand with Campos’s widow, Renata. Replacing Campos on the PSB ticket was not an easy decision for her, said João Paulo Capobianco, a biologist and former deputy minister to Silva at Brazil’s Environment Ministry, who was with Silva in Recife.

“She suffered a lot with this process,” he said. “She is aware of her responsibility. As it was the wish of everyone, of Eduardo, of the family, she ended up accepting.”

Silva’s political career began in environmental activism. A history graduate and adherent of left wing, Catholic ‘Liberation Theology’ Silva became active in the rubber tappers union alongside Chico Mendes, an iconic unionist and environmentalist who was murdered in 1988. Both participated in direct actions against deforestation. She joined the nascent PT, became a state deputy in 1990, and Brazil’s youngest-ever senator in 1994, at just 36.

As Lula’s Environment Minister from 2003-2008 she was behind a multi-ministry Action Plan to Prevent and Control Amazon Deforestation that led to a 57% decrease in just three years and which won her the Norwegian Sophie Prize for environment and sustainable development in 2009. Silva tried to set up her own Sustainability Network party to fight this election, and when that failed accepted a role as Campos’s running mate.

“She is a very objective person and very transparent in her ideas. And she has an enormous capacity to attract collaborators,” said Capobianco, who now runs the Institute of Democracy and Sustainability think-tank.

Although Neves, the center-right candidate, would be first choice for a Brazilian business community increasingly concerned by the country’s low growth and high inflation, Campos had won ground promising long-term inflation targets and an independent central bank. He also made friends with Brazil’s powerful agribusiness lobby, a key motor in the country’s stumbling economy. “What we have on record is actually pretty good from a market perspective,” said Volpon, head of Emerging Market Research Americas at the Nomura Bank in New York.

But “ruralists” distrust Silva and her sustainable development agenda. “Marina Silva has never been able to be clear about her sustainable development in relation to agricultural production. We do not understand how she plans to do this,” said Senator Kátia Abreu, expected to be re-elected president of the powerful National Agriculture and Livestock Confederation in October. “It is one thing to be an activist, another to be a president with a more realistic agenda.”

That distrust may be eased by the choice of Beto Albuquerque, a federal deputy with links to Brazil’s agribusiness, to be Silva’s running mate. Having a more business-friendly name on the ticket will free her up to run as a more populist, “third way” candidate.

And it’s that appearance of being something new, and different, that makes Silva a genuine threat to Roussoff in October’s election. Many in Brazil are looking for a leader who is something more than the cynical career politicians the country is sick of, according to Brazilian film director Fernando Meirelles, who directed City of God and The Constant Gardener.

“The big difference between Marina and the majority of politicians is that she puts her ideas and her program for the country in front of her political career or party interests,” he said. 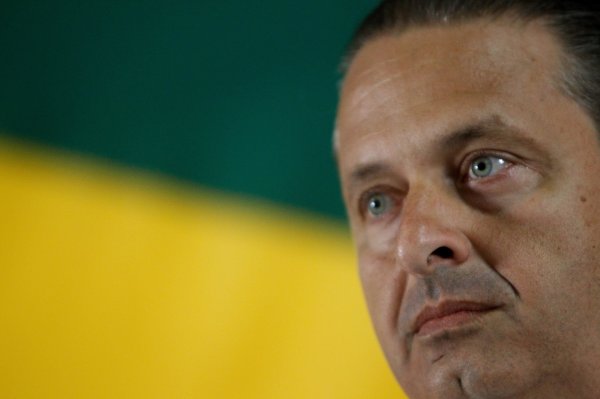 Death of Presidential Candidate Shocks Brazil
Next Up: Editor's Pick