What Anonymous Is Doing in Ferguson

Ron Johnson of Missouri State Highway Patrol speaks to a protester wearing a Guy Fawkes mask while he walks through a peaceful demonstration in Ferguson, Mo., on Aug. 14, 2014
Lucas Jackson—Reuters
By Alex Rogers

On Aug. 12, Ferguson City Hall’s website went black, its phone lines died and officials had to communicate by text, according to the St. Louis Dispatch and the New York Times. Self-identified members of the amorphous, hard-to-define hacker community Anonymous had struck again, according to the papers, this time in response to the shooting of a black teenager, Michael Brown, by a white police officer. A Twitter account allegedly associated with Anonymous — @TheAnonMessage — threatened Jon Belmar, the St. Louis County police chief, with publicly releasing his daughter’s information “in one hour” unless he released the name of the officer who killed Brown. While Belmar didn’t give in, and @TheAnonMessage dropped the ultimatum, the account and other self-identified Anonymous members would post two days later the home address, Social Security number and phone number of Belmar, telling him to “run, Jon, run.” While that practice, known as doxing, is a common Anonymous cyberattack, @TheAnonMessage would go on to wrongly accuse a citizen of killing Brown. Twitter subsequently shut down the Twitter account @TheAnonMessage without much uproar from the Anonymous community, which prides itself on fighting censorship.

A week later, Anonymous is still at work, marking Thursday as a nationwide “day of rage” to protest police brutality. To better understand why Anonymous, whose targets have been varied (including MasterCard, a Tunisian dictator and Kiss singer Gene Simmons), is interested in the Brown shooting, TIME spoke with Jay Leiderman, an attorney who includes among his clients Anonymous hackers, and Gabriella Coleman, a McGill University anthropology professor who is writing a book on the loose-knit community. We also spoke about how many people were involved in Operation Ferguson and how the organization dealt with one of its own after falsely accusing someone of murder.

Why is Anonymous involved in the Ferguson protests?
Anonymous’ “main demand” is “justice” for Brown and his family, Leiderman says. They can grab the attention of the Ferguson police and “let them know that they’re serious,” he says. Operation Ferguson falls in line with previous Anonymous efforts to unmask alleged perpetrators, like the 2012 Operation Red Roll, which released private information about people allegedly complicit in the rape of a 16-year-old girl in Steubenville, Ohio.

The “whole reason why” Anonymous got involved was a local rap artist — Tef Po — who called out for help on Twitter, according to Coleman, and the affiliated members responded. A day after the Brown shooting, Anonymous, through Operation Ferguson, released a statement asking Congress to pass a bill to set “strict national standards for police conduct.” It also warned the Ferguson government and police department of cyber-counterattacks if the protesters were abused, harassed or otherwise harmed.

“If you attack the protesters, we will attack every server and computer you have,” wrote the Operation Ferguson author. “We will dox [document trace] and release the personal information on every single member of the Ferguson Police Department, as well as any other jurisdiction that participates in the abuse. We will seize all your databases and e-mail spools and dump them on the Internet. This is your only warning.”

Coleman says that there isn’t unanimous support within the hacker community nor Anonymous on shutting down websites. “It’s a big contentious debate between hackers who have a purist, free-speech view, and others who have a more contextual one,” says Coleman. “There’s also a debate within Anonymous itself where a lot of hackers who really do the work of intrusion are not fans of doxing for two reasons: a) it’s technically uninteresting and b) sometimes they’re actually trying to gain access to those sites to hack them.”

“Really the main point is to gain media attention,” she says. “That’s kind of why that’s done more than anything else.”

How many Anonymous members are involved in Ferguson?
Anonymous is by definition a secretive group, one without leaders, an agenda or a set list of members. “No one has any idea” how many people are involved in Operation Ferguson, according to Leiderman, who called Anonymous a “nebulous and decentralized collective.”

“It’s impossible to say who is and who isn’t a member of Anonymous,” says Leiderman. “There is now way to disprove it.”

But Coleman says you can see which causes are more popular than others.

After the arrest of WikiLeaks’ founder Julian Assange in 2010, and Anonymous disrupted the websites of MasterCard, Visa and PayPal for declining to serve WikiLeaks, around 7,000 people logged onto the Anonymous chat channel and downloaded hacking tools, according to Coleman. That ad hoc association was “probably the largest ever,” Coleman says, and by her estimates, much more than the current Operation in Ferguson. (Anonymous distanced itself from Assange in October 2012 after he asked supporters to pay money for access to documents.) The Ferguson channel is used by up to 160 people, she says, although “thousands and thousands” are “within the orbit” supporting the cause through Twitter.

“It is really hard to tell in terms of the numbers,” says Coleman. “You do get a sense of which ones are bigger and smaller and I would probably put this in the definitely not small, [but] definitely not as big as something like WikiLeaks. Probably in between.”

“People had suspicions, but because he was being really active and contributing a lot to the operation,” says Coleman, “they kind of put their skepticism aside in some ways until it was too late … This is something that in some ways is perennially a problem and just has to do with the kind of architecture of Anonymous where you can’t really control what people are doing. There are norms and rules and ethics that definitely push behavior towards certain areas and not others, but by no means [are they] foolproof.”

After Twitter took down the account, an Anonymous member wrote a post to show a detailed ticktock “that this was the work of an Anon who was acting against the advice of others.” Other Twitter accounts associated with the group, like Operation Ferguson’s account, declined to name the Brown shooter as it looked for additional sources.

Coleman says that with the exception of a few cases, Anonymous has “generally been correct” in uncovering the right information. She calls @TheAnonMessage a “loose cannon” that had earned “skepticism” because of erratic actions in the past. Coleman says there “was no outcry” when Twitter shut down @TheAnonMessage despite Anonymous being “so famous for hating censorship.”

“Anonymous attracts people who are willing to push the envelope,” she says. “But there is always a hope that people who are doing it are getting the right names and information … I think that there was this expectation that people are doing that work carefully so when they’re not, people in Anonymous get really pissed off.”

When asked if Anonymous’ reputation was hurt after @TheAnonMessage released inaccurate information, Leiderman first blamed the media for going with an untrusted source before saying that Anonymous usually does a better job of establishing a correct verdict.

“Really you can’t pin that all on Anonymous,” he says. “The media that ran with it [failed] to confirm or deny the veracity of the statement … If the older and larger accounts run with something, it usually has a better chance of being more accurate.”

“You really want to see more consensus in the collective before you run with something like that,” he adds. “People that identify with Anonymous are really good at asking, ‘Are you sure?’, ‘How do you know?’, ‘Can you share the data with us in a secure way?’… and I’m not sure that happened in this case.” 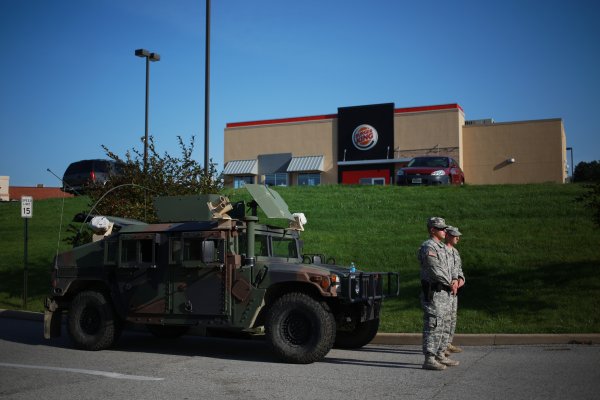 National Guard Pulled From Ferguson
Next Up: Editor's Pick