New Jersey Governor Chris Christie lost his cool Tuesday after a state resident suggested that the Bruce Springsteen superfan might not be in the Boss’s good graces.

After being asked about a rumor that Springsteen had requested Christie stop using his music at his rallies (a rumor that has not been substantiated), Christie totally freaked, as seen in this video from NJ.com.

“No. Never did that. No, you’re wrong about that,” Christie said. “Bruce has never asked me to do that. He never has. You’re wrong.”

The New Jersey resident then asked about whether he had been dancing with Bon Jovi in the Hamptons, prompting Christie to remind her that he has many celebrity friends besides Springsteen.

“I wasn’t dancing with Bon Jovi, actually, I was dancing with Jamie Foxx,” he said. “So if you’re gonna be cute, we should get the story right.”

But of all his famous friends, the Boss is Christie’s BFF. In fact, they hung out just recently!

The governor appeared furious at the insinuation that he and Bruce were on the outs, although he did not provide any proof of their friendship, such as letters from camp, friendship bracelets, or selfies. He ended by telling the female journalist, who seemed very calm, to calm down.

“When I leave, just so we can have this lady be a little calmer, let’s play Bon Jovi on the way out,” he said, adding: “If you want to debate, run for governor and I’ll debate you.”

Correction: The original version of the story incorrectly described the woman who confronted Christie. She was a New Jersey resident. 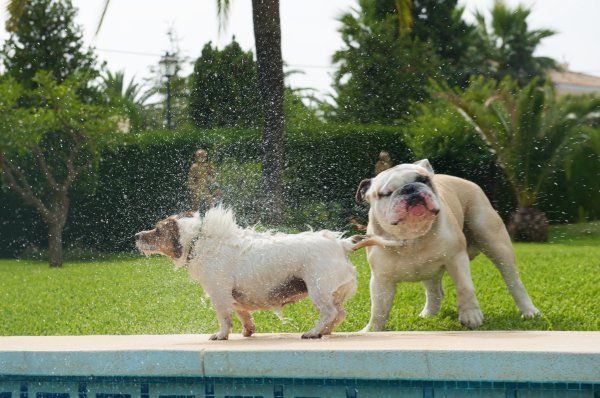 10 Dogs That Bravely Completed the Ice Bucket Challenge
Next Up: Editor's Pick