Life Lessons From One of the World's Oldest Men

One sunny Sunday morning seven years ago, shortly after we moved into our new home in suburban Kansas City, I noticed that my neighbor across the street was busy in his driveway. Wearing only a pair of shorts, his barrel chest rippling, he was using a sponge and a garden hose to wash his girlfriend’s purple PT Cruiser. Did I feel a twinge of envy at all that this scene implied—the Saturday night romance; the love-interest perhaps dozing languorously inside as her man basked and flexed? No comment. With a glance at my own battered minivan, with its sticky cup holders and booster seats smelling faintly of baby puke, I went inside.

What made the scene especially memorable was that my neighbor was 102.

When you meet a man who is 102, you don’t expect to know him very long. Yet my friendship with Dr. Charles White—Charlie—wound up lasting seven years. Charlie died on Aug. 17, about an hour after he turned 109. That was long enough for him to leave a powerful mark on me.

Talking to Charlie was like falling into a history book. He was born in 1905, during the second Theodore Roosevelt administration. Buffalo Bill Cody and Chief Geronimo were still alive; John F. Kennedy and Laurence Olivier were not yet born. The Wright Brothers had made their first flight not 20 months earlier. Henry Ford had not yet started to mass-produce cars. Among the names the world did not yet know: Lenin, Mao, Hitler, Franklin Roosevelt, Albert Einstein, Louis Armstrong, Shirley Temple, Peter Pan.

As I mentioned, he was quite a physical specimen. In our first conversation, he bemoaned the fact that he had recently been compelled to give up golf, at 101. (It was several years before he surrendered his plans to resume the sport.) Even more amazing, though, was Charlie’s brain. He salted his conversations with details plucked effortlessly from yesterday’s newspaper and events of a century ago.

I asked him once if he could recall the old Newman Theater, where young Walt Disney premiered his first Laugh-O-Gram animations in 1921 before moving to Hollywood. Charlie answered with a vivid tour of every movie house in the city circa 1921—not just the Newman, but the place around the corner where his sister played the organ to accompany silent reels, and another place a few blocks from that, and the vacant lot where films were screened on hot summer nights before air conditioning. Then he painted a word-picture of Electric Park out south of town, at the end of the streetcar line. That was the place where Disney watched in awe as the nightly tableaux of human actors rose from fountains on hydraulic lifts each evening. With its manicured landscaping, nightly fireworks, and miniature train puffing around the perimeter, the amusement park of Charlie’s youth fed the imagination that would eventually create Disneyland.

The first doctor in Kansas City to specialize in anesthesiology, Charlie could discourse at length on the invention of modern medicine. He could tell you what it was like to be a general practitioner making house calls in the Depression, removing tonsils with picture wire. It was a hard life, making ends meet on late payments and barter—no health insurance back then. When science advanced beyond ether and brandy for surgery patients, he leapt at the chance to learn anesthesia at the Mayo Clinic. That was 1944. He later learned that his specialty had side benefits; Charlie confided to me that he rendered his kids unconscious for long drives across Kansas on their way to vacations in Colorado.

Charlie had a lot of laughs over the decades. He loved to tell about the time that he and his boyhood friend—later the controversial journalist Edgar Snow, friend of Mao—set off cross-country on dirt roads in a rattletrap 1919 automobile. When the car and their money gave out in California, the lads picked fruit to buy food and hopped freight trains to get home. He worked his way through medical school blowing the saxophone in a dance band. He heard a promising young Kansas City jazzman named Charlie Parker in a local club.

Another local guy, Harry S. Truman, once sent Charlie to South America to assist in a surgery on the president of Peru. Diplomatic immunity suited Charlie. He smuggled a pet monkey on the return trip, which lived in his home for years.

But his was a real life, which means that it wasn’t all laughs. Charlie knew grief from boyhood. His father, a minister of the Disciples of Christ, was killed in a freak elevator accident when Charlie was only eight. His mother took in boarders to pay the bills; some of them were doctors—that’s how Charlie found his future. Later, his first marriage was a trial of mental illness that ended in his wife’s suicide. As the decades passed, Charlie outlived his friends, his associates, even one of his children.

What this rich life taught him was a kind of inner peace, an equanimity reflecting the robust wisdom known as Stoicism. Charlie was able to separate the things he could control from the things that he could not, and he didn’t fret about matters beyond his power. One of his daughters told us once that she was complaining about an insufferable certain someone we all knew when her father told her to stop. You can’t change people like that, Charlie schooled her. If I let such people irritate me, I would have been dead a long time ago.

He taught me something even more useful in the last months of his life. By then, his superhuman body was finally wearing out. Charlie was nearly blind and mostly deaf, though his mind never faded. More and more of his charming and straightforward conversation has to do with his readiness for death. He wasn’t depressed about the oncoming end. Even less was he angry or fearful. He didn’t pine for days past nor pick scabs of regret and resentment.

It was time to leave.

Charlie White lived the dream of countless men and women in my generation, the insufferable Baby Boomers. Hale and hearty well past 100, forever handsome with his rakish moustache and abundant hair, Charlie was prosperous, comfortable, ageless. And that dream led him to a graceful acceptance that … it ends.

Don’t get me wrong: I am all in favor of long and healthy lives. But there is something unseemly in the modern notion that science should aim to cure us of death. Charlie came closer than anyone else I’ve known to that vision of endless life. Close enough to decide that it’s not what it’s cracked up to be. He saved me a good deal of fretting. Thanks, Charlie.

When I heard that he was gone, I thought of Emily Dickinson, for some reason: “Because I could not stop for Death—He kindly stopped for me.” I smiled to know that Charlie was glad to see him.

Correction: The original version of this story incorrectly stated who was president when White born. It was Theodore Roosevelt. 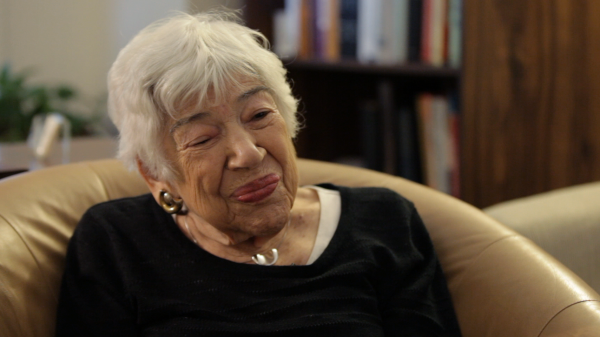 100-Year-Old Sex Therapist on What's Wrong With Sex Today
Next Up: Editor's Pick