U.S. President Barack Obama delivers a statement to provide an update on Iraq and the situation in Ferguson, Missouri in the Brady Press Briefing Room of the White House August 18, 2014 in Washington, DC>
Olivier Douliery/pool&mdash;© Olivier Douliery/pool/Corbis
By Zeke J Miller

The White House could hardly contain itself earlier this month when President Barack Obama signed a bill allowing American consumers to unlock their cell phones. The bill was driven in part by the White House’s own petition website, “We The People,” and touted as an example of a new model of citizen advocacy influencing change in Washington.

“Today, President Obama will sign into law the Unlocking Consumer Choice and Wireless Competition Act, and in doing so, will achieve a rare trifecta: a win for American consumers, a win for wireless competition, and an example of Democracy at its best—bipartisan Congressional action in direct response to a call to action from the American people,” Jeffrey Zients, the Director of the National Economic Council, and Sen. Patrick Leahy wrote on the Huffington Post.

But the true story is hardly that simple. The “We The People” site, launched in 2011, has had a mixed history of living up to its promise of making the government more responsive to citizens.

While more than 151 responses have been posted, from serious ones on gun violence to humorous ones calling on the federal government to build a Death Star, some of the most controversial petitions have been waiting, and waiting, for official replies.

To date 19 petitions have reached the 100,000-signature threshold at which they are entitled to a response, most recently a petition calling for a “Michael Brown Law” requiring all police officers to wear body cameras in the wake of the Ferguson, Mo. shooting. But most of the 19 do not pertain to recent events; seven petitions are outstanding from 2013 and one, calling for the mandatory labeling of genetically modified food, is outstanding from 2012.

Nearly all of the outstanding petitions are on politically or diplomatically sensitive topics that the White House is clearly trying to wait out, from a plea to pardon admitted NSA leaker Edward Snowden to a call to declare the Muslim Brotherhood a terrorist group. The White House was unresponsive to a petition to “Stop SOPA 2013″—referring to a divisive anti-piracy bill—so an equally popular sequel was created, “Stop SOPA 2014.” And despite all of the White House’s harsh rhetoric on Russia since its annexation of Crimea and the shoot-down of Malaysia Airline Flight 17, the administration has yet to reply to a petition to designate Russia a state sponsor of terrorism.

The White House has also passed on replying to a number of petitions, including one to free Wikileaks-leaker then-Pfc. Bradley Manning, citing its terms of participation. “To avoid the appearance of improper influence, the White House may decline to address certain procurement, law enforcement, adjudicatory, or similar matters properly within the jurisdiction of federal departments or agencies, federal courts, or state and local government in its response to a petition,” the website states.

The outstanding petitions with more than 100,000 signatures by date of creation:

-May 3, 2013: “Invest and deport Jasmine Sun who was the main suspect of a famous Thallium poison murder case”

-May 15, 2013: “Provide necessary assistance to prevent Taiwanese people from being murdered by Philippines and rebuild friendship.” 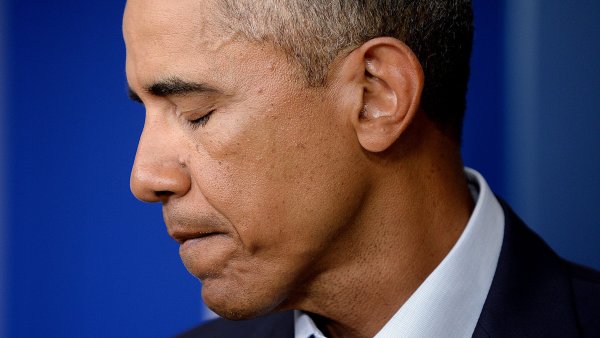 Live: Obama on Beheading
Next Up: Editor's Pick