REVIEW: If I Stay and Life After Beth: What if She's Not Dead?

The drama that plays out in the Kübler-Ross five stages of grief has a happy ending — sort of. After denial, anger, bargaining and depression comes the balm of acceptance. But what if your beloved died from a snake bite and was buried, and then shows up undead? She (Aubrey Plaza) has forgotten that she was about to break up with you (Dane DeHaan) and now loves you more than ever. She’s also a decomposing cannibal. If that’s your lot, you may undergo the five stages of zombie-girlfriend response: depression, shock, lust, bargaining and throw-her-off-a-cliff.

Or how about this: You are the one who’s the near dead girl (Chloë Grace Moretz), who is in a coma after a car crash that may have totaled the rest of your family. As doctors work desperately to revive you, your spirit wanders through the hospital and into flashbacks of your love affair with a budding rock star (Jamie Blackley). You understand that you’ll come back to life only if you can summon the heroic resolve to carry on amid the most plangent heartbreak. Will you?

In the dying light of summer come two movies about girls who are not quite dead. Life After Beth is what Plaza, from Parks and Recreation, describes as a “zom-com-rom-dram” — it’s mostly com, but it puts a weird spin on the solemn subject of how the living rationalize the death of a loved one. If I Stay, based on Gayle Forman’s YA best seller, is a straightforward tearjerker that creates a union of two beautiful people (Moretz’s Mia Hall and Blackley’s Adam Wilde) so it can tear it apart, to pose the Clash’s eschatological question: Should I stay or should I go? Neither film is mandatory viewing, though each has its appealing aspects.

If I Stay, directed by documentarian R.J. Cutler (The September Issue) and scripted by Shauna Cross, rounds up all the YA clichés like cattle without applying the brand of its own personality — think The Fault in Our Stars, but substitute a car crash for terminal cancer. Filmed in Vancouver but set in Portland, Ore., the movie draws Mia’s family as an adorably boho bunch: father Denny (Joshua Leonard), a rock drummer turned music teacher; perky-cool mom Kat (Mireille Enos); and Mia’s much younger brother Teddy (Jakob Davies), who quotes Iggy Pop. It’s a Norman Rockwell portrait of an indie-rock clan, rendered in glaucomic soft focus and ripe for parody in the IFC sketch-com Portlandia — a connection soldered by Blackley’s resemblance to a younger, much cuter Fred Armisen. All the Halls overflow with such snug, smug warmth that the gods are pretty much obliged to punish them for excess adorability. Cue the family’s dreadful crash; the fault is their car.

(READ: Richard Corliss’s review of The Fault in Our Stars)

Something of a misfit anachronism in the family, Mia loves Beethoven and Bach, whose suites she listens to on her bedroom phonograph, and dreams of admission to the Juilliard School on the other edge of the continent. Yet following the folk wisdom that a girl marries her father, Mia falls for indie rocker Adam, who seems destined for stardom despite sporting neither skull tattoos nor outlaw attitude. He loves this cello girl and behaves like a gentleman, except for a few instances when the plot forces him into spasms of sullen prickitude over Mia’s ambition to follow her own star to New York City. In her coma state, as she wanders unseen by others but occasionally felt, like Patrick Swayze in Ghost, she is a Sleeping Beauty trying to decide if she needs a resurrecting kiss. (Not much suspense there, since fans of the source novel know that Forman wrote a sequel, Where She Went, featuring the same characters.)

The reason to catch this death-flirting, borderline-deplorable weepie is totally Chloë. Not long ago she was a preternaturally poised child star as the elfin superheroine of Kick-Ass and the vampire darling of Let Me In. Moretz has matured into a gorgeous 17-year-old whose wide face and pensive intelligence reward a viewer’s rapt attention. Usually playing a girl far hipper than her age, she must somehow convince audiences that she is a shy prodigy of the cello who, when sensitive stud Adam takes fond notice of her, nearly wilts in his love light and wonders, “Why me?” You may wonder how Moretz landed in the Cartoonistan of this dewy melodrama and chalk it up to alien abduction. Yet she almost convinces you, solely on the power of her commitment.

(READ: Mary Pols on Chloë Grace Moretz in Let Me In)

The vibe is deader, and more deadpan, in Life After Beth, the first feature from Jeff Baena (who co-wrote David O. Russell’s strenuously wacky I Heart Huckabees a decade ago). DeHaan is Zach Orfman, devastated by the loss of his beloved Beth. Shopping for the right gift for her memorial service, he asks a clerk if the store has black napkins. (That’s “more of a Halloween item,” the clerk replies.) He gets sympathetic counseling from Beth’s parents Maury (John C. Reilly) and Geenie (Molly Shannon) but soon finds they’re concealing something: the late Beth. Her parents want to believe she is not zombiefied but resurrected — Sleeping Beauty miraculously awakened. Evidence points to the contrary: her skin cracks in daylight, she has a habit of munching strangers and car upholstery, and she has developed a bizarre hankering for smooth jazz. Zach is at first elated and aroused, but cautious. “You don’t wanna eat me?” he asks as they loll by the backyard pool. “I mean, like, really eat me.”

Since George Romero’s 1968 Night of the Living Dead revived the zombie movie, filmmakers have played the genre for laughs (Shaun of the Dead) and love (Warm Bodies). Baena’s Romero-and-Juliet vamp could be called Night of the Laughing Dead or Yawn of the Dead, depending on whether you buy the notion of a nice girl who develops some unhealthy habits. At first Beth seems to be only chronologically addled; she’s “worried about my test tomorrow.” (“But it’s the summer,” Zach says, and Beth groans, “I wish.”) Soon, the movie tries to freeze that querulous smile on your face into a rictus. Beth starts to decay (“Sweetie,” Zach whispers as they kiss, “your breath“) and then to embrace her fate with wondrous fury. When Zach observes that Beth just “ate a guy,” she thunders, “What do you want from me? I’m a f-cking zombie. Zombies eat guys.”

(READ: Mary Pols on the zombies in Warm Bodies)

Packing its cast with veteran comic actors (Paul Reiser and Cheryl Hines as Zach’s parents, Garry Marshall as a zombie grandpa) and one eligible youngster (Anna Kendrick as Zach’s long-ago, still smitten classmate), Life After Beth gets a nice defibrillating jolt from the two leads. Plaza, whose wide-eyed stare suggests a zombie as painted by Margaret Keane, plausibly navigates Beth’s journey into full-throttle Linda Blair demonic dementia. DeHaan, who made his first big impression on HBO’s In Treatment and played Peter Parker’s nemesis Harry Osborn in The Amazing Spider-Man 2, always looks as if he had just been told of a loved one’s demise and has taken medication to soothe the shock. That makes Zach a role he was born to play.

For half the movie, Zach can ignore the Kübler-Ross guidelines. He’s just thrilled that Beth is back and hot for his caress. Sure, she’s a zombie — but nobody’s perfect. 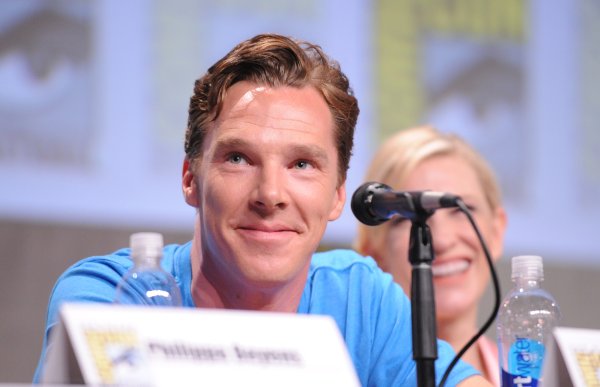 Benedict Cumberbatch to Star in Warner Bros.' Jungle Book
Next Up: Editor's Pick