This Enormous Tablet Could Replace Your Kid's TV

Family game night is going digital — a new super-sized tablet for kids is aiming to replace the classic board game, the Xbox and maybe even the television.

The Big Tab, developed by fast-growing startup Fuhu, boasts a massive screen of either 20 or 24 inches, depending on the model. That’s a big jump from the company’s popular Nabi 2 tablet, which has a seven-inch screen. But Fuhu founder Robb Fujioka says the big screen size will encourage children to collaborate and socialize when they use their device, rather than tuning out the rest of the world.

To make the tablet into a social hub, Fuhu has developed a large suite of multiplayer games, from classics like checkers and Candyland to internally developed titles. A feature called “Story Time” offers 35 interactive e-books that utilize animated illustrations. Kids can also utilize video editing software, a Pandora-like radio service and educational software.

There are also tools for adults on the Android-powered device. A separate Parent Mode allows adults to download apps from the Google Play or Amazon stores. Parents can also set limits on which apps their children can access and for how long they can use them. Like Fuhu’s other devices, the Big Tab also boasts a virtual currency system that lets parents pay their kids when they complete chores or use educational apps for a certain amount of time.

The device, which also lets parents track their kids’ usage patterns, could appeal to adults looking to guide their children toward more productive forms of entertainment. Fujioka says he replaced the television in one of his children’s rooms with the Big Tab and uses it to keep track of whether his kid is playing educational games or watching Netflix. “It’s not just a boob tube,” he says. “It’s an interactive device.”

Though the tablet market is only a few years old, the devices have been embraced by parents in a big way. Tablet usage among children between ages two and 12 increased from 38% to 48% over the last year, according to research firm NPD. Juli Lennett, head of the toys division at NPD, said it’s a combination of safety, durability and kid appeal that has led to the quick popularity of children’s tablets. “When the price point is $99, on top of being a real functional tablet, these additional features are tough to beat,” Lennett told TIME via email.

The challenge for Fujioka and Fuhu will be convincing parents to pony up for a high-end tablet. The Big Tab will cost $449 for the 20-inch model and $549 for the 24-inch when it launches this fall, far more than the $180 the Nabi 2 goes for. And while the larger size means the Big Tab can be used by multiple people at once, it also makes the device less portable than its smaller cousins, eliminating one of the original selling points of the tablet form factor. “The beauty of these tablets is you throw them in your bag and you go,” says Gerrick Johnson, an equity research analyst at BMO Capital Markets who follows the toy industry. “A [24-inch] tablet becomes a little more difficult.”

Still, Fuhu is well positioned to prove skeptics wrong. The company sold 1.5 million of its normal-sized kids’ tablets in 2013, says Fujioka. This year, Fuhu is leading the children’s tablet market in the U.S., according to NPD, beating out competitors like Samsung and KD interactive. The question now is whether others will follow their lead in developing kids’ devices that cost as much as an iPad or a video game console.

“We think there’s a big market out there,” Fujioka says. “We believe we’re defining a new category of tablet products for the family.” 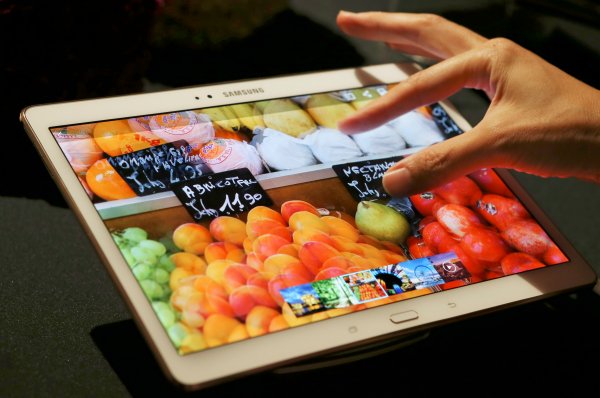 These Are the 10 Best Android Tablets of 2015
Next Up: Editor's Pick