Attorney General Holder Appeals for Calm in Message to Ferguson

United States Attorney General Eric Holder looks on during a meeting in the Oval office of the White House with U.S. President Obama to receive an update on the situation in Ferguson, Missouri August 18, 2014 in Washington, DC.
Olivier Douliery—Olivier Douliery/picture-alliance/dpa/AP Images
By Denver Nicks

U.S. Attorney General Eric Holder called for an end to the violence in Ferguson, Missouri, as he promised the Justice Department investigation into the shooting death of an unarmed teen by a police officer “will be full, it will be fair, and it will be independent.”

“At a time when so much may seem uncertain, the people of Ferguson can have confidence that the Justice Department intends to learn — in a fair and thorough manner — exactly what happened,” Holder wrote in a piece published by the St. Louis Post-Dispatch. The U.S. Attorney investigating the case told TIME Tuesday his department’s work is going smoothly, but cautioned the released of information will be a slow process.

Holder’s message comes as violent unrest continues nightly in the St. Louis suburb of Ferguson after the August 9 death of Michael Brown, an 18-year-old killed by a police officer there. Missouri Governor Jay Nixon ordered National Guard troops to the area Monday after local police were heavily criticized for what many argued has been an excessive response to the unrest. However, the National Guard’s presence did little to calm tensions Monday night, as at least 78 people were arrested during violent demonstrations that continued through the evening.

Holder arrived in Ferguson Tuesday to take stock of the situation and “be briefed on the federal civil rights investigation” that’s currently underway, he wrote. Holder says the Department of Justice has committed around 40 Federal Bureau of Investigation agents to the case in addition to Civil Rights Division prosecutors investigating the shooting. Holder also urged Ferguson’s peaceful protestors to work together to calm those who have been looting and rioting during the ongoing demonstrations.

“I urge the citizens of Ferguson who have been peacefully exercising their First Amendment rights to join with law enforcement in condemning the actions of looters, vandals and others seeking to inflame tensions and sow discord,” Holder wrote. 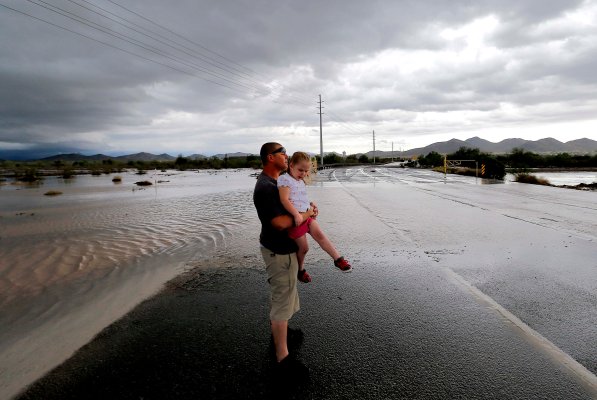 Flash Floods Wreak Havoc in Arizona
Next Up: Editor's Pick