Stop Pretending Nothing Happens in August

The headlines these days all seem to demand exclamation marks. Iraq is teetering on the brink! Russian troops are massing on the Ukrainian border! Gaza lies in ruins! World’s worst Ebola epidemic afflicts Africa!

Oh, and it is also National Goat Cheese Month. Welcome to another quiet and peaceful August.

Yeah, right. One of the puzzles of summer is why so many of us persist in pretending that August is a month when nothing happens, when we can step back, tune out, take a break, and recharge. Europeans even think they are entitled to take the entire month off.

Perhaps there’s something about late summer, a couple months gone since school let out in June, that makes us forget our history. This year, August is full of reminders. We’re commemorating the 40th anniversary of President Richard Nixon’s resignation and the 100th anniversary of the outbreak of World War I.

Bellicose August also brought the Gulf of Tonkin incident that triggered our involvement in Vietnam, Iraq’s invasion of Kuwait in 1990, the failed coup attempt against Mikhail Gorbachev in 1991, the Ribbentrop-Molotov Pact in 1939 that enabled Hitler to invade Poland on September 1, and the atomic bombings of Nagasaki and Hiroshima in 1945 and ensuing Japanese surrender. Hurricane Katrina also occurred in August, but let’s leave Mother Nature out of it.

There’s a melancholic quality to August, a month nearly synonymous with “waning days of summer.” Less acknowledged in our cultural vernacular is the extent to which the “waning” feeling is as much about the end of another year as it is about the end of summer.

Sure, we sing “Auld Lang Syne,” kiss under the mistletoe, and wish each other a “Happy New Year” when December turns to January. But who among us doesn’t feel that the real reset moment each year, the new beginning, comes in September, the day after Labor Day? The fall is when we start school and football season and the U.S. government fiscal year, and when we get serious, if we ever do, about our work.

August, then, is about the waning not only of summer, but also of each passing year, and lost possibilities. It is about the waning of life, even. There is a grasping, desperate quality to many of the historical events that took place in August—hence the resonance of the title of Barbara W. Tuchman’s historical bestseller about the outset of World War I, The Guns of August. It’s quite fashionable to study the sequence of events that led to the so-called “Great War,” which in retrospect appear like dominoes falling as if on a predetermined course. The rest of the war is far less fashionable to read about, as it proves too muddled a narrative. Best to focus on the August beginning, and how it ended all that came before.

Mischief conspires with melancholia in August, the notion that mice can play while the cat’s vacationing. It’s not clear whether Saddam Hussein thought he would get away with taking over Kuwait if he did so while the American president was summering in Maine, or whether that president’s son, when he was in office a decade later, would have taken warnings of an airborne al Qaeda plot more seriously had he been briefed about them at some time and place other than August at his Texas ranch.

August and the waning days of summer (and of the year, I insist) is when we let our guards down, creating an opening for those with an agenda, be it the invasion of Poland or Kuwait, or the shorting of the pound (George Soros famously bet against the British currency in August 1992, and won big). So keep your eye on colleagues who seem especially busy and eager to stick around the office this month. Who knows what they’re up to?

Financial markets are notoriously slow in August, the month of lowest trading volumes, when bankers follow their clients to the beach. But “slow” can be a deceptive term in business as in life, given that lower volume and less liquidity in a market can make it more volatile, and more susceptible to speculation. If you buy or sell 1,000 shares of a company, you are far more likely to influence that stock price on a day when only 5,000 shares trade hands than on a day when 100,000 shares trade hands.

That same dynamic applies to anyone seeking to influence the outcome of any event: your influence increases the fewer people are engaged. Which is what makes this such a dodgy month, and the current news headlines so ominous.

And now, I’m off to the beach for a week. It’s August, after all. 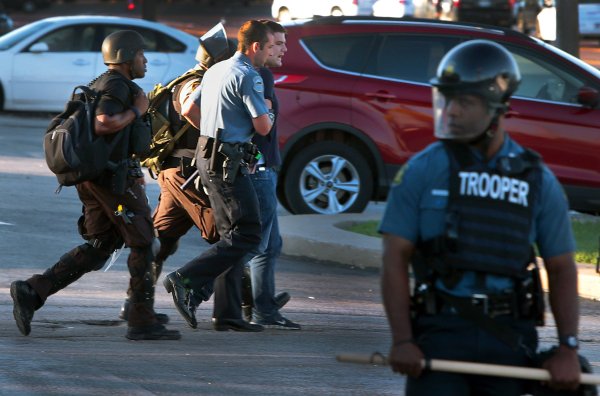 It's Now Guns Vs. Cameras in Ferguson
Next Up: Editor's Pick