Tony Bennett and Lady Gaga arrive to their "Cheek To Cheek" taping at Jazz at Lincoln Center on July 28, 2014 in New York City.
Kevin Mazur—Getty Images
By Megan Gibson

Lady Gaga has revealed the cover art for her upcoming duet album with Tony Bennett. According to Gaga, the photo was taken by Steven Klein when the two singers were sharing a moment and “just standing there talking, laughing, singing.”

Bennett and Gaga first worked together on the duet track “The Lady Is a Tramp,” which appeared on Bennett’s 2011 album, Duets II. In 2012, Bennett revealed that the two would be teaming up for a whole album together. That album, called Cheek to Cheek, will be released on Sept. 23 and will feature renditions of classic songs such as “It Don’t Mean a Thing (If It Ain’t Got That Swing)” and “Sophisticated Lady.”

Gaga also tweeted the artwork for the album’s second single, “I Can’t Give You Anything But Love,” which was released Tuesday.

The album’s first single, “Anything Goes,” was released earlier this month, along with a video featuring footage of Gaga and Bennett recording in the studio: 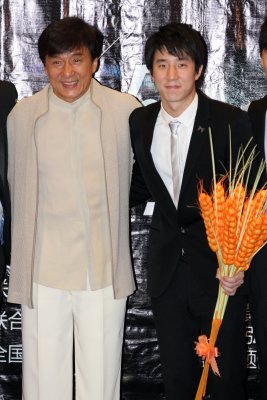