Hillary Clinton Is Going Back to Iowa

Former U.S. Secretary of State Hillary Clinton speaks at an event at Children's Hospital Oakland Research Institute (CHORI) to launch a community campaign to encourage parents to talk, sing and read to their young children in Oakland, Calif., July 23, 2014.
AP
By Dan Hirschhorn

Hillary Clinton will travel to Iowa in September for a high-profile political gathering, according to reports Monday, her first public appearance in the key caucus state in six years, and one that will be widely seen as an attempt to begin courting voters there ahead of a possible 2016 presidential bid.

Both Clinton, the former Secretary of State, and former President Bill Clinton will appear at the Annual Harkin Steak Fry, the Des Moines Register reports, a must-visit for presidential hopefuls that is hosted by longtime Democratic Sen. Tom Harkin.

Harkin is retiring from the Senate this year, and he promised in a recent note to supporters that this year’s Steak Fry, the 37th one and his last, “just might promise to be the best ever.”

The event will mark Clinton’s first public return to Iowa, which holds the country’s first nominating caucuses, since she suffered a critical loss to then-Sen. Barack Obama in their 2008 fight. Clinton placed third that year behind Obama and John Edwards, after her campaign proved indecisive about how hard to campaign for caucus voters who often reward grassroots organizing over big events and TV ads. As the overwhelming front-runner for the Democratic nomination if she chooses to run again, Clinton could be sending an early signal that she won’t write off Iowa.

“I couldn’t be happier than to share this special day with two such close friends,” Harkin told the Register of the Clintons. “They have contributed so much good, inspiring leadership to this country, and I know they will continue to do so in the years ahead.” 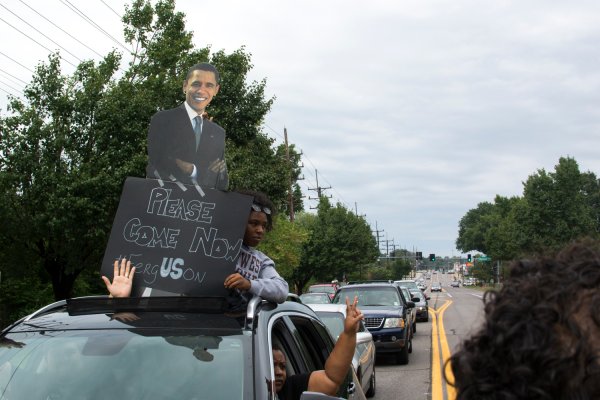 Ferguson Violence Again Puts Obama in the Spotlight on Race
Next Up: Editor's Pick